We list down five quick facts about Hero’s new offering 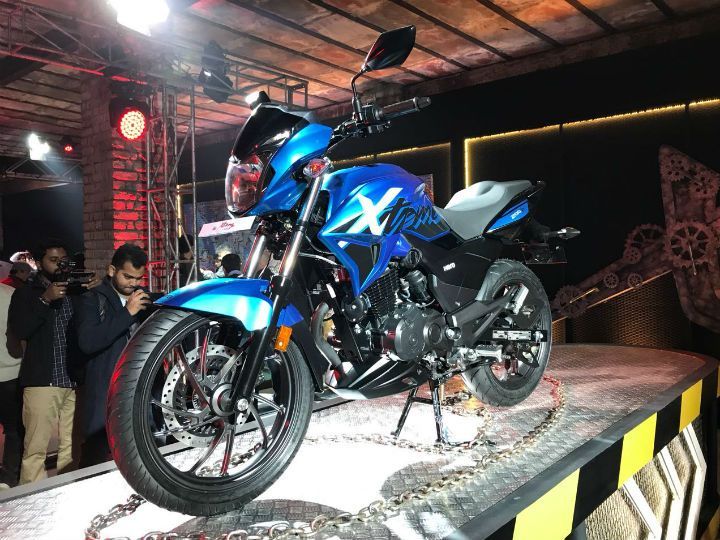 After much anticipation, Hero MotoCorp recently unveiled its most powerful bike in its current portfolio. But was wait worth it? We list down five interesting facts for you to make a better assessment.

Its sharp bodywork, beefy design and dual-tone paint finish and graphics certainly make it stand out from the company’s other offerings. The tail section is much cleaner and less bulky than the concept. Hero has, however, ditched the sporty split-seat option for a more conventional single seat saddle. So is it just a beefier Hero Xtreme? Well, yes more or less.

In terms of features, the Xtreme 200R gets LED DRLs and LED tail-lamps. While these features are offered on the Apache RTR 200 4V, they are not offered on the Bajaj Pulsar NS 200, both of them being its fiercest competitors. The Xtreme 200R is also equipped with ABS, a first for the company. But it’s only a single-channel unit and not a dual-channel one like on the RTR 200.

The instrument cluster on the Xtreme 200R is a semi-digital one, with the tachometer on the left and an LCD digital display on the right. It only offers basic information such as the speedometer, odometer, fuel-range, a clock and a service indicator. Meanwhile, the fully-digital console on the Apache displays a plethora of information such as a lap timer, acceleration timer, fastest speed recorder, service indicator and gear indicator.

Powering the flagship motorcycle is an all-new, 199.6cc, air-cooled, single-cylinder engine developed at the company’s plant in Jaipur. It is mated to a 5-speed gearbox and churns out 18.4PS of power at 8000rpm and 17.1Nm of torque at 6500rpm. The engine also gets a balancer shaft for reduced vibrations and extra refinement. Hero says the engine is designed to deliver more low-end torque, which will make it easier to ride in city traffic. The company further claims that the Xtreme 200R can cover 0-60kmph in 4.6 seconds with a claimed top speed of 114kph. The bike has a claimed fuel efficiency of 39.9kmpl. We are expecting the same engine to be carried over to the upcoming Hero Xpulse as well.

It seems that the company has opted an air-cooled, carbureted unit to keep costs in check. But seeing how both of its competitors utilise a more premium liquid-cooling system along with fuel-injection (in case of the Apache), the Xtreme 200R may not make a strong case for itself in terms of performance.

It comes with ABS, a first for a Hero motorcycle

Hero has equipped the Xtreme 200R with a diamond-type chassis with a 7mm longer rear swingarm. It gets a 37mm conventional telescopic front fork and an 8-step adjustable monoshock unit at the rear, the latter being a first for any motorcycle in the company's portfolio. Braking duties are handled by disc brakes that measure 276mm at the front and 220mm at the rear, with an optional single-channel ABS. Its 100/80 front and 130/70 rear wheels come wrapped in radial tyres.

Likely to be priced competitively

Hero will announce the pricing of the motorcycle in April, and the motorcycle will hit the showrooms soon after that. Considering the lack of features and performance, the Hero Xtreme 200R will undercut both the Bajaj Pulsar NS 200 and TVS Apache RTR 200 4V in terms of pricing. The standard Xtreme 200R could receive a price tag of around Rs 90,000, while the ABS model is likely to be priced around Rs 95,000. (all prices, ex-showroom Delhi)