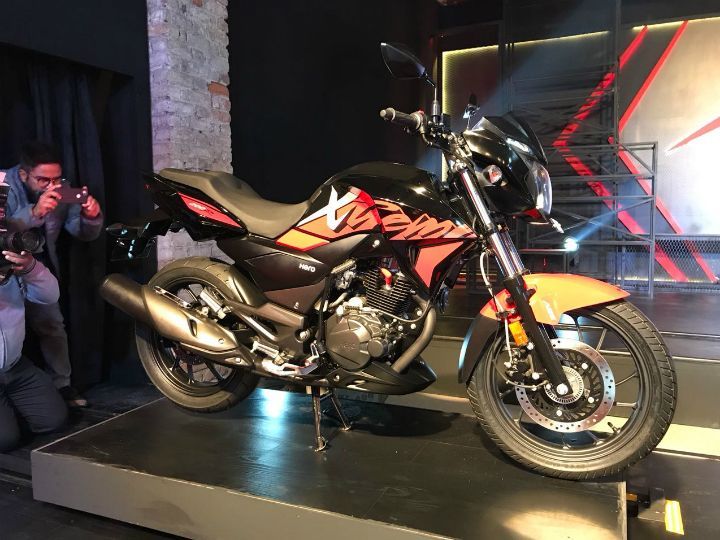 Hero MotoCorp today unveiled the Hero Xtreme 200R. However, this isn't the first time we're seeing the motorcycle. Previously, the company had displayed the motorcycle in its concept form at Auto Expo 2016 where it garnered positive feedback from visitors and enthusiasts alike.

In terms of design, the muscular-looking fuel tank extensions make the Hero Xtreme 200R look like a beefier sibling of the Xtreme 150. The company has also equipped the motorcycle with a large headlamp along with integrated LED DRLs and LED taillamps. The instrument console seen on the concept has been carried over as well. It comes in a number of dual-tone paint options with edgy graphics.

The flagship motorcycle sports a diamond-type chassis, 37mm front telescopic forks and a rear eight-step adjustable monoshock. The latter is a first for a motorcycle from the homegrown bike manufacturer’s vast catalogue. Braking duties are handled by 276mm front disc and a 220mm rear disc. Single channel ABS is offered as an optional accessory, which is again a first for any Hero motorcycle. The bike tips the scale at 146kg (kerb) and its saddle sits 795mm high.

The company will announce the prices of the Xtreme 200R in March and deliveries are expected to commence in April. The Xtreme 200S will go up against the likes of the TVS Apache RTR 200 4V, the Bajaj Pulsar NS 200 and the KTM 200 Duke. The company has packed the motorcycle with all sorts of bells and whistles to make it stand out from its competition. But will it be enough? Stay tuned to find out.