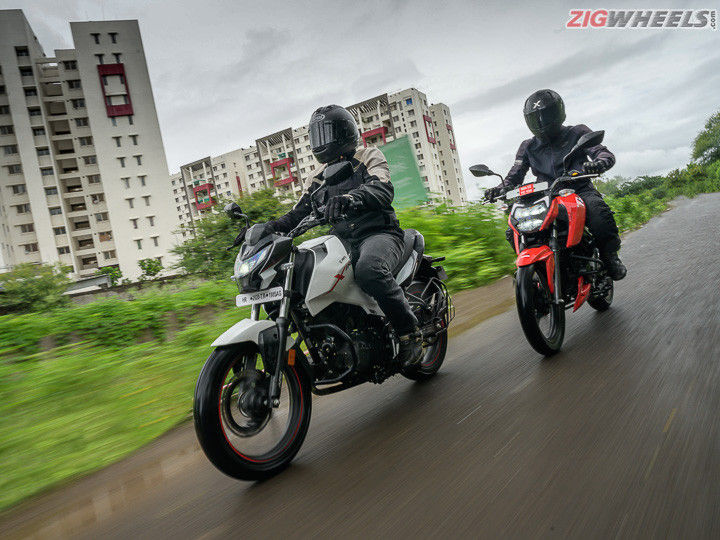 Ever since it was introduced, TVS’ Apache RTR 160 4V has been the benchmark setting motorcycle in the premium commuter category. Its 4-valve engine held centrestage as the RTR went about stunning the competition with its performance, premiumness and practicality. In our tests the Yamaha FZ V3 was humbled by the TVS’s refinement and fuel efficiency. The super sharp and engaging Suzuki Gixxer made the TVS seem a bit bland, but the RTR’s performance and comfort factor tilted the balance fimly in its favour. However, the BS6 era has hit the RTR 160 4V where it hurts, causing it to shed some power and torque while having to square off with another homegrown hero, the Xtreme 160R. It’s going to be a close one.

At first glance picking between the two will be down to their different personalities. The RTR looks racy and sharp, the Xtreme looks muscular and tough. The Hero looks striking thanks to its large contrasting colour panel that sweeps from the tank to the side panel. There’s also the Transformers-like headlamp and the aggressively upswept tail section with a smoked black tail lamp at its very tip, all of which adds a sporty vibe to an otherwise commutery persona.

The RTR with its sharp tank extensions, the white band running down the middle of the tank, the offset fuel filler cap and the chequered flag graphics give it lots of oomph. Look closer and the faux vents behind the tank extensions, the belly pan, and the carbon fibre texture on the rear view mirrors show that TVS designers have invested a bit more time and passion while creating the RTR. The eyebrow-like LED DRLs on the headlamp are the only bits that give any opportunity for criticism.

The difference between the two motorcycles can also be felt in the design and quality of switchgear. The TVS’ units look slick and work with a positive click. The Hero’s switches look like an afterthought. More importantly, there are ergonomic flaws: for instance, the indicator switch is placed too high and you inadvertently fumble to find it. Both motorcycles use LCD instrument clusters, the TVS packs more features than the Hero, but sadly neither offer a gear position indicator.

So, while the two motorcycles have very different approaches and appeal, there’s no denying that the TVS manages to look and feel more premium.

There’s no two ways about it, the TVS’ refinement is still unbeatable. The engine is absolutely butter smooth and it is only past 8,000rpm that a bit of a buzz creeps in on the footpegs. The Hero is also commendable, staying smooth until 7000rpm, but then gets a bit of a buzz from the ‘pegs and the ‘bar. If the TVS wasn’t in the picture the Hero would have been the best in the segment, that too by a fair margin. But what it trades in in terms of refinement gives it a bit more personality and builds a sense of connection with the rider. On the go, the TVS also impresses with super slick gear shifts while the Heros are sure, but a bit notchy.

However, the TVS’ high performance benchmark takes a hit for 2020. The punchy midrange, a call sign of the RTR experience, has now gone missing. Even when we first rode the RTR 160 4V we came away feeling that the FI version lacked the torque at lower revs, and now the fuel-injected motor tuned for BS6 emissions underlines that sense further. On paper the fuel-injected motor loses just a bit of power (0.78PS) and torque (0.68Nm), but the difference on the road is distinctly different as you have to rely on the rev happy nature to get going.

And the Apache can rev, all the way upto 11000rpm. As a result it is a tenth of a second faster than the Xtreme to 60kph from standstill, taking 5.84s to the Hero’s 5.97 seconds. At 80kph the RTR 160 stretches the advantage to 0.4 of a second. In the BS4 era this gap would have been much more; however, the drop in the BS6 RTR’s performance mutes the brilliance of the engine. However, given its smoothness and punch at higher revs, the RTR makes for a friendly highway tourer. The TVS also ekes out a 2kmpl advantage over the Hero on the highway, 49.6kmpl and 47.4kmpl respectively. The difference in the city is virtually non-existent, the TVS returning 54.78kmpl to the Hero’s 55.47kmpl.

The Xtreme 160’s 2-valve design is simpler, but Hero has managed to extract 15.2PS from it. For reference the BS6 Suzuki Gixxer makes 13.6PS. Its 14Nm of torque is almost the same as the Apache, but it peaks about 700rpm earlier. More importantly, the Xtreme presses its advantage by being almost 10kg lighter. The result is that when accelerating in-gear from 40-80 kmph the Hero takes 9.17 seconds to the TVS’ 9.66 seconds. Between 3,000 and 7,000rpm it feels especially punchy, with power trailing off as you get to the 9000rpm redline. So, for city use or for darting out of corners on weekend rides, the Xtreme’s boisterousness makes it an easier and more willing companion too.

At a standstill the TVS makes a bold statement. The thicker handlebars, the slightly leaned forward seating position and the high-set footpegs give it a very racy feel. The Xtreme in comparison feels commuterish. The stance is fairly upright and its chunky tank doesn’t feel as easy to clamp onto as the RTR. But get going and there is a change in the assessment as the Hero’s superior components start to whisper words of confidence.

The Xtreme’s fatter forks and the wider tyres, a radial at the rear, make the short wheelbase feel much longer and planted. Not only do you feel the tarmac more clearly, the sharper steering geometry and the lighter chassis make the Hero feel delightfully light to manoeuvre, be it for navigating city traffic or slicing through corners. The advantage is stretched out even when shedding speed, the larger brakes and tyres help it stop shorter from 80kph -- 37.8metres versus 42.6 metres -- while also making it feel more planted. The RTR’s brakes have always been weak in terms of feel and bite, and this hasn’t changed in its BS6 version.

Despite this shortcoming, the RTR is an enjoyable motorcycle to hustle. You can trust the TVS’ long wheelbase to give you solid composure in corners. But it requires a smooth and experienced hand to keep transitions or fast corner entries clean as any body movement that changes the weight on the high-mounted pegs tends to upset the bike more.

So the difference between the two is that the rider needs to learn and adapt to the TVS’ likes and dislikes, while the Hero lets you take the lead, adapting to your preferences and pace. When you combine its lithe willingness with its grunty engine, the RTR feels like a very potent and enjoyable corner carver.

The difference in the way these two motorcycles treat their occupants is interesting and telling too. The TVS’s high-set footpegs will make it a more cramped place for taller riders. The Hero’s more spaced out pegs and upright handlebar make it more comfortable for taller riders too. What gives the Xtreme its handling prowess also doubles its practicality quotient as its turning radius is lighter and steering it at slow speeds requires less effort too.

Shorter riders will appreciate the Hero more too as the seat height is 10mm lower than the TVS’. However, during long stints the sharply curved rider’s seat on the Xtreme will press against the rider’s tailbone, creating some discomfort. There are no such issues on the long and flat seat on the RTR 160 4V.

And when it comes to the pillion the RTR offers a far better experience. As the seat is lower, it is easier to get onto and more spacious too. On the go, it feels more enjoyable as the seat is also flat, which means you don’t slide forward when going over broken roads or under hard braking. The Hero’s pillion seat is tipped forward, and that means discomfort for the pillion. The integrated grab handle for the pillion is also a bit harder to reach too.

The ride quality on the TVS is also softer, cushioning you from bad roads better. The Hero is also surprisingly good at gobbling up bad roads, but its tauter setup means you can feel more of the road -- though at higher speeds it is the Hero that feels more composed as it doesn’t wallow like the RTR.

We told you, these two are stacked close. For different reasons they will appeal to your head and your heart. The TVS Apache RTR 160 4V continues to wow with its practicality quotient, be it refinement, comfort or luscious levels of quality. However, the BS6 sized hole in its trump card -- the grunty performance -- has dulled its sheen. At the same time the Hero Xtreme 160R is hitting where the RTR is already hurting by offering peppy everyday performance, sharper dynamics, and most importantly a greater sense of involvement. The Hero does all this while being lighter and easier to ride. However, the Hero doesn’t quite match up to the TVS in terms of the feel good factor or the pillion comfort and the TVS’ established track record and sensible quotient means it isn’t quite beaten yet. But one thing is clear, when we need some two-wheel therapy, the keys we enthusiasts will reach out for will belong to the Hero.