Take the loud and proud twin-cylinder motor from the TNT 300, stuff it in a new chassis to go along with the sporty new attire, and you have the 302R. We find out if this blend makes the new Italian a convincing entry level sportsbike. 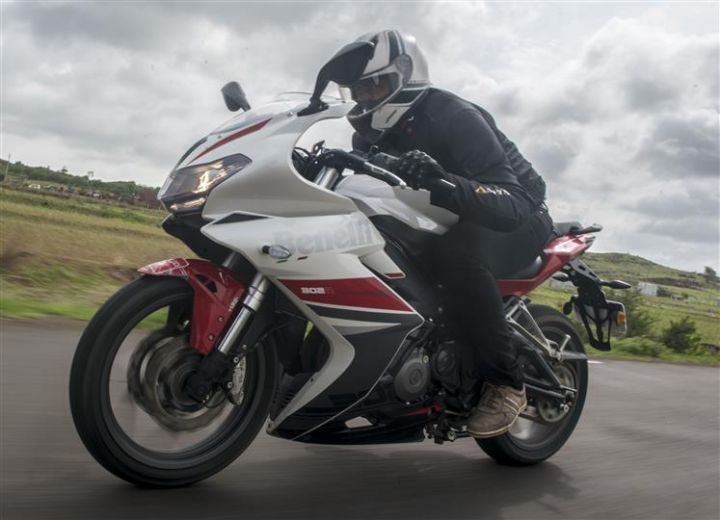 We just can’t seem to get enough of sports bikes. We like them sleek. We like them with as many cylinders as possible, and we like them fast. And, um, affordable? We’re willing to compromise a bit on the horsepower and cylinders for that. The twin-cylinder DSK Benelli 302R promised a lot of excitement when it first showed up at the 2016 Auto Expo. In the time since, the Italian has received a fair few modifications and updates, including a new name! From the Tornado 302, we now have the 302R. It’s time we swing a leg over and find out if this motorcycle is just about the looks, or has DSK Benelli strung the right notes to give the competition a run for the money.

We’ll start with a criticism. The proportions are a bit off when it comes to the headlamp. The split headlamp looks just a touch oversized. From a few angles the large split headlamp kind of makes, the rest of the bike looks a bit weedy. Look past that and you will find a very appealing design. The sharply contoured fairing with the two-tone paint job and the redesigned livery makes it look properly sporty.

What is also worth noticing here is the chiselled 14-litre fuel tank that showcases the Benelli lion engraved on either side. Moving onto the rear section, the twin-pod exhaust gels with the overall design and further enhance the style quotient of the bike. The bike has been put together well, judging from how the fairing and other body parts are bolted. But the fit-finish levels aren’t quite up to the mark, as the fuel tank cover felt flimsy. The mounting for the exhaust canister also felt a bit rickety to the touch as even a light prod was enough to shift it. All switches worked well but the quality of switchgear feels a tad bit shady when compared to its competition.

We already know that the 302R gets the same heart that beats in its naked sibling, the TNT 300, which is an inline 300cc, liquid-cooled, two-cylinder motor. Just like the TNT, the 302R has a peak power of 38.5PS being generated at 11500rpm, and 26.5Nm of maximum torque kicks in at 10000rpm. And as the specs suggest, the power delivery isn’t too different. Which means, there’s a lot of drama created by the exhaust note, but the performance doesn’t quite match up. It doesn't feel as quick as you would expect a bike with those power figures to be. The same was also apparent from our test run, as the 302R managed to reach 60kmph in 4 seconds, while 0-100kmph was achieved in 9.2 seconds. For the record, the 302R is only 5 kilograms heavier than the TNT.

You really need to rev the 302R hard to bring the fun quotient into play, a trait very similar to its naked sibling, the TNT 300.  We managed to claim a true top speed of 147.74kmph before running out of open roads during our test run. As far as vibes are concerned, they get quite apparent on the footpegs and handlebars around 6000rpm, further settling down to offer an almost vibe-free ride. The six-speed gearbox feels slick as the gear shifts felt precise. Finding neutral was also never a problem.

We had the bike with us for 2 days and during my stint in the city, I was quite surprised by the sheer tractability of the motor. It seemed almost unreal that the 302R could comfortably tread along at 30kph in sixth gear without any judder. Speaking of which, the 302R takes 4.88 seconds to go from 30-70kmph in 3rd gear. Whereas, 40-80kmph in 4th gear was achieved in 5.62 seconds, which is quite commendable considering the amount of mass the engine has to carry around.

And yes, one point worth mentioning about this motor is the exhaust note. We just can’t get our heads around how the Italian manufacturer has managed to get a parallel-twin motor to sound like an inline-four.

The 302R is a heavy motorcycle, weighing in at a kerb weight of 198kg, and the weight is quite literally felt while manoeuvring the motorcycle from a standstill. That said, the bike feels very nimble once you start riding it, courtesy of the newly designed chassis on offer. The new chassis has also enabled the 302R in handling corners a lot better than the TNT 300, and even though the motorcycle has a heavy front end, you can charge into corners with confidence. The chassis also makes the bike feel light in corners and so you can stick to the line and flick the motorcycle on to the next one without hesitation. A potent chassis deserves equally potent tyres, and Benelli has done justice to the 302R as the 17-inch alloys come wrapped with sticky Metzeler 110/70-section front and 150/60-section rear tyres, which grip the road firmly without breaking a sweat.

The seat height is 780mm, which is low enough for 5ft 3in-tall riders to ride comfortably. I am 6 feet tall and the sitting posture for me was surprisingly comfortable, even while testing the motorcycle on open highways for a good 100 kilometres. In fact, the ergonomics seem more apt for sports touring as opposed to track riding, as the handle bars are slightly higher-set and the foot pegs aren’t too rear set either. The split seats are also well padded with just the right amount of cushioning, thanks to which I could carry on riding without any breaks to stretch my legs.

Speaking of suspension duties, the 302R gets 43mm telescopic forks up front with preload adjustment, and they too are shared with the TNT 300. On the other hand, the preload-adjustable rear hydraulic monoshock is placed in the traditional format here, unlike the offset monoshock on the TNT 300. Both are tuned to offer a plush ride and manage to soak in almost every other pothole and bump thrown at it, all this without compromising on their efficiency of tackling corners.

With the ABS active, the dual petal discs along with the rear disc brake offer a strong bite, bringing this 300cc bike to a halt from 80kmph in 35.08 metres. However, the reach-adjustable brake lever felt very wooden, as it failed to offer the much-required feedback while braking.

The 302R was put through our standardised fuel efficiency tests and it managed to return 28.11kmpl in city riding conditions. Whereas on the highway, the 302R managed 31.5kmpl.

The 302R doesn’t come across as an outright performer, the major factor being its weight, which even though isn’t felt much while riding, does take the sting out of the performance on tap. So if you are looking for a 300cc performance sportbike, we reckon that the 302R may not be the ideal machine to take home.

However, if performance is not on your mind and you are looking for a motorcycle that can give you a lot of pose value, feels smooth and offers confidence-inspiring handling characteristics, then the 302R is the ideal tool for you, especially when you have an exhaust note similar to the much bigger bikes. With a price tag of Rs 3.48 lakhs (ex-showroom, India), it falls in line with the pricing from its competition. But what sweetens the deal is the safety net of ABS.