Packed with a refined in-line twin, quality cycle parts and a delightful exhaust note, can the new DSK Benelli TNT 302 crush the dominant status of the frantic KTM 390 Duke? Brace up, this is going to be one crazy ride. Get overall comparison review for Benelli TNT 302 and KTM 390 Duke on the basis of price, specs, pics, engine, interior and exterior at ZigWheels.com 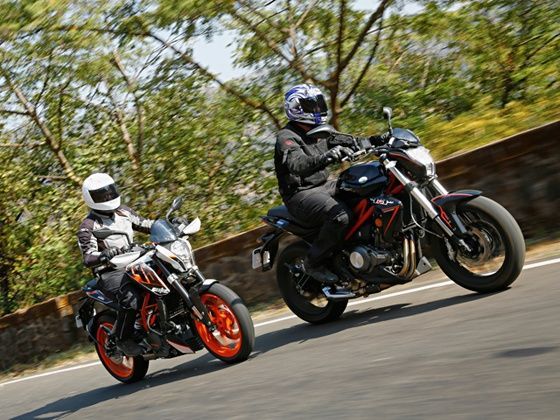 Tranquil. That’s how the Benelli TNT 302 feels around the sweeping turns of the mountain roads. Summer still hasn’t set in and there is a cool breeze blowing. I open my helmet’s visor to soak in the scenic ride, beautiful weather and the symphony from the exhaust of the Italian bike. The road is smooth, just like the power delivery of the in-line twin. Squeeze open the throttle and there is no mad rush of power, choking or frothing at the mouth. But instead the flow is linear, unexaggerated and... did I say tranquil. I’m in no hurry to reach my destination, as the ride itself is so relaxing and comfortable.

But if you are in a hurry, then there’s the KTM 390 Duke. It’s a bike that you just don’t cruise on but one that enjoys being pushed hard, revved all the way to the redline and thrown in to corner to grind off the tyre’s chicken strip. There’s no time for the scenery or the breeze, just a hollow howl from the Single resonating in the valley. The Duke likes to play it rough and promises to excite. It’s a bit like a two-wheeled version of some character of ‘Fifty Shades of Grey’. And Indian enthusiasts have been lapping it up (the bike I mean) especially for the price it is available at, being manufactured in India by Bajaj Auto.

These are two completely different bikes, with a substantial price difference and positioning. But whenever there is new bike in the sub-500cc segment, then it has to prove itself against the top-selling KTM. And so here we are carrying forward that tradition. After all, it’s the current 390 owner or an aspiring buyer that will upgrade to or consider the Benelli TNT 302.

It feels as if the Benelli TNT 302 has been designed by a set of well researched engineers, who have mixed all the right ingredients from accomplished bike models of yesteryears, in a modern form.

And radical is the key word while describing the KTM 390 Duke design. Unlike the Benneli the KTM appears to have come straight off an enthusiasts or racers dream canvas. It looks stripped to the bone with its minimum bulk attribute, and sharp fuel tank lines and deep knee recess. The design is compact with the sole intention to keep the weight low. It looks a lot more edgy and eager than the TNT 302, with the front biased design, bright orange alloys and Trellis frame, and bare rear styling. The knuckle guards also make the 390 Duke look more distinct, just like the various optional KTM power parts which one can customise the bike with.

The Benelli TNT 302 punches back, and makes up for lost ground with its quality cycle parts, better proportions and the detailing. The seat is more comfortable and there’s more room for the rider on the TNT than on the compact Duke and even the footpegs, although rear-set, are not as far back as on the KTM, giving the Benelli a more natural riding position. Even the part-digital-part-analogue instrument cluster of the TNT 302 is easy on the eye than the 390 Duke’s all-digital clocks. It also has a larger 16-litre fuel tank which will be useful during touring.

The biggest advantage KTM has is its power to weight ratio, and its maverick nature. The 373.2cc single-cylinder motor is more powerful, quicker and madder than the Benelli. At 44PS it has 7 horses more than the TNT 302, however a little more low end torque would have helped the KTM in the city. But at higher revs the Duke's just too much fun.

The TNT's motor is quite a contrast. It feels more sure-footed and composed than the hyper KTM as the smooth parallel twin offers a more linear power delivery. Both the motorcycles come with a 6-speed gearbox, but the TNT has slicker gear shifts and clutch feel is more progressive. And though it develops peak torque at a higher 11,500rpm, the TNT 302 still feels a lot relaxed throughout the revs and is free of unpleasant vibrations.

Another plus for the Benelli is that the parallel twin sounds wonderful post 8,000rpm, almost imitating its bigger siblings. The KTM is quick to climb the revs and most of the time is between 6,000-9,500rpm which, along with the fact that it’s single with a large 373.2cc bore, it does generate a lot of engine heat. Though the 2015 KTM 390 Duke does try to fix this issue by altering fan’s draft away from the ride, it still gets uncomfortable during Indian summer. An ailment the Benelli TNT 302 is free of.

The KTM is a lot more firmly setup, like the company’s tagline, it’s “Ready to Race”. But this allows plenty of jolts to filter in, unsettling the bike. And if you have a pillion, then be prepared for earful of obscene profanities. The suspension of the Benelli is lot more forgiving and better suited for daily commute and long distance touring, alike. But it’s another story when you look at the handling of these bikes.

Both the bikes have a similar setup with upside down front fork, rear mono shocks and Trellis frame. The difference here is the rigidity of KTM’s frame and its light weight alloy swingarm, while the Benelli relies on an old-school tubular one. Not to forget that the KTM is 46kg lighter than the Benelli, that’s a difference of almost 25 per cent! Not surprising that the 390 Duke is sharper and lot more intuitive, compared to the TNT 302 which has traces of the chassis flexing when pushed hard.

The saving grace are the 120 section front and a wide 160 section rear Pirellis on the Benelli TNT 302 which pull the bike out from most tricky situations. But again, the KTM 390 Duke runs on stickier Metzellas, which along with better dynamics of the bike help the rider hone his skills and push the boundary further.

The grip level and feedback from the tyre also help braking of the KTM. Also the fact that the Duke 390 comes with ABS as standard, which is missing on the Benelli test bike, makes a big difference in reducing the stopping distance, more so in adverse road conditions. Having said that, the dual discs with twin rotor front brake setup offers great bite, with right amount of feel, but Benelli should have at least offered ABS as an option.

We've ridden both these beautiful machines back to back for almost an entire day. The KTM, priced at Rs 1.87 lakh, is simply spectacular on these twisties. It's light, nimble and is packed with terrific fire power ideal for hard riding. But not everyone wants to ride hard. At least not every day. There are days, like today when we'd like to cruise comfortably for 300km, or maybe take a lazy ride with a pillion. Things this Benelli is cut out for.

It's not easy to come to a clear verdict, since KTM's stunning power-to-price ratio throws every other bike out of contention. But the Benelli, although more expensive at Rs 2.83 lakh (ex-showroom Delhi), looks and feels more premium. With its composed nature, torquey motor, excellent detailing and the fact that it's more suitable for everyday use and touring, the TNT 302 gets an edge over the 390 Duke.