Still the best in its segment, even in the BS6 era? 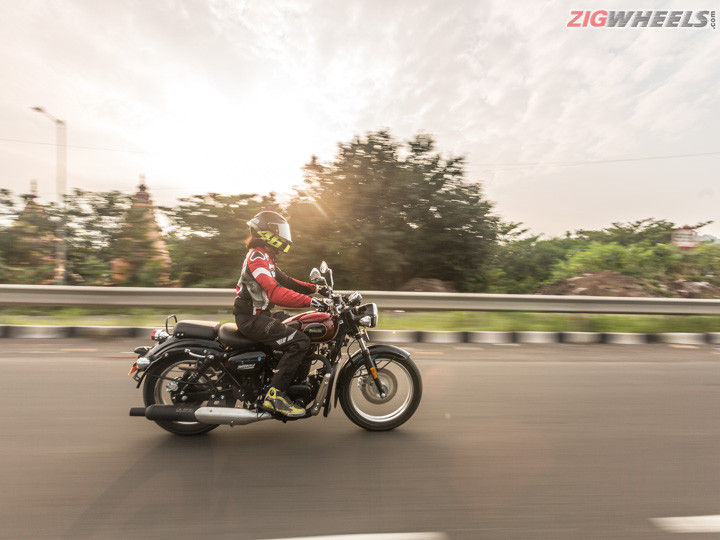 Having spent the first 18 years of my life in Bombay, you’d think I was completely at home in the hustle and bustle of this chaotic clusterduck. But then I was shipped off to a sleepy little town called Manipal for four years of college, and when I returned, it all seemed unbearable. The rat race, the crowds, the traffic, the noise, it all seemed so unnecessary. What’s the hurry? Where do all these people need to be? Why is everyone rushing places and yet never on time?

The Benelli Imperiale 400 is a motorcycle that would be quite at home in my dopey, quaint college town. It’s in no hurry to get anywhere, and every little ride on this bike takes me back to a lazy afternoon in Manipal. Actually, scratch that. There are no little rides on this bike. And that’s because it makes you want to take the scenic route, every single time. On a KTM, you want to get to the top of the mountain and back as quickly as possible. On the Imperiale, you set off for the top of the mountain, but on the way back down, you start to wonder where this little by-road leads, or what’s at the end of that offshoot. This is a bike that makes you look for excuses to ride. Or at least it was, in the BS4 form that we tested last year. What you see here is the Imperiale 400 BS6, and while it may look identical, this bike isn’t quite the fairytale that it was 12 months ago.

The Heart Of The Matter

The 374cc air-cooled single-cylinder engine has always been the highlight of the Imperiale, not because it makes 2PS and 1Nm more than the Classic 350 BS6, but because of the linear and refined manner in which it delivers its modest output figures (unchanged from the BS4 version). Stay away from either extreme of the rev range, and the SOHC motor pulls cleanly from 1500rpm, building momentum strongly up to 6000rpm, before wheezing its way to a near 7000rpm limiter.

But in this BS6 iteration, it seems as though the Imperiale IS in a hurry to get places because our bike was plagued with fuelling issues that resulted in frequent spurts of unintended acceleration. The severity ranged from mildly annoying to downright dangerous, and this wasn’t an issue that we faced with the BS4 bike at all. Nevertheless, we have informed Benelli about the issue, and we have the Imperiale with us for a few months, so we hope something like an ECU flash can provide a solution. On that note, if you have questions about what the Imperiale is like to live with, fire away in the comment section and we’ll give you answers in our upcoming reports.

The way that the 21PS and 29Nm is spread across the rev range also means that Benelli has been able to give the Imperiale nice tall gearing (70kmph in 2nd!) -- a perfect recipe for a great highway cruiser. A 5th gear 100kmph cruise sees the vibe-free motor sitting pretty at 4500rpm, which is the same as the Interceptor 650. But the Italian feels a lot more relaxed and stress-free while doing it. You can comfortably push as high as 120kmph for overtakes, but beyond that, the Imperiale begins to feel out of breath. At the opposite end of things, the tractable motor and tall gearing also mean that you don’t need to shuffle through the ‘box too often when riding in city traffic, which is just as well, because the lever throw is excessively large. What will be an issue in slow-moving traffic, is the heat from the engine and exhaust system, especially near your right ankle, which, not entirely coincidentally, is where the additional catalytic converter is located on the BS6 bike.

What further aids the long-distance usability of the Imperiale is its very roomy and upright riding position, combined with the well-sized and well-padded rider’s seat. The Imperiale has no major flaws that could cause fatigue on the highway, and yet still offers a characterful and entertaining riding experience so you don’t fall victim to highway hypnosis. The bike itself will have to be enough to keep you entertained because there are no fancy toys on the Imperiale, just a couple of trip-meters and a fuel gauge. Speaking of which, highway mileage is up over its predecessor, so that 14-litre fuel tank (12 usable + 2 reserve) should be good for over 400km. But there are some minor flaws.

The 41mm telescopic fork does an exceptional job of flattening out the road underneath, but the rear shocks feel stiff and lack travel. With the moderate preload setting that we received the bike with, and my 56kg frame, the ride quality was damn near unbearable, but dropping the preload to its minimum level improved things considerably. Nevertheless, the rear end does still feel quite bouncy and you get tossed up a fair bit, especially over successive closely spaced bumps. On our highways that often resemble wildlife reserves, the confidence to hold high speeds would’ve been far greater if Benelli had offered more stopping power on the Imperiale. The single 300mm front disc and 240mm rear disc feel a tad impotent when trying to stop this 205kg mammoth from high speeds. The stiff rear suspension and slightly weak brakes were shortcomings of the Imperiale BS4 too, and it’s a pity that they haven’t been fixed with this update.

Another one of the BS4 bike’s flaws was the wallowy handling, with the bike frequently and easily being set into a gentle weave when encountering mid-corner bumps at high speeds. The weave never reaches dangerous levels, but it definitely isn’t the most confidence-inspiring sensation when cornering a motorcycle. But since the Imperiale has no corner-carving aspirations, we can forgive the fact that this hasn’t been fixed on the BS6 bike.

As epic a long-distance tourer as the Imperiale is, sooner or later you’re going to have to pull over for a break, and that’s when you’ll notice its sweet-and-sour styling. Benelli seemingly had two design teams styling the bike: one appointed to the front half of the bike and the other (most likely the interns) designing the rear. The round headlight and indicators, wire-spoke wheels and teardrop-shaped fuel tank are textbook classic bike stuff, and a dual-tone paint job and tank pads do a great job of enhancing the look. Even the engine, though a little too blacked out for our liking, does sport some smart-looking covers and logos. Aft of this, is where things begin to get a little, erm, Chinese. A disproportionately wide rear fender is only the start of it.

The bigger issues are the awkwardly executed grab handles and random maze of metal tubes running amok on either side of the rear wheel. Even so, the Imperiale certainly isn’t an ugly bike and actually looks quite handsome overall. It’s also a headturner, not least because of its pretty massive dimensions (it’s 10mm longer and has a 50mm larger wheelbase than the Classic 350). And while a 780mm seat height does sound pretty approachable on paper, the width of the seat means that the vertically challenged will find it, erm, challenging, to get their feet flat on the floor.

The Times They Are a-Changin'

Last year, we could recommend the Imperiale with firmness and conviction over the Classic 350 and Jawa Jawa, but a lot has changed since then. There have been changes to the bike itself, with a couple of new issues cropping up. And there has been a lack of change in the areas we would’ve liked. Most importantly, 12 months ago, Benelli demanded Rs 1.69 lakh for the Imperiale. Now, it’ll set you back by a minimum of Rs 1.99 lakh, with the wine red shade you see here costing a cool Rs 2,10,900.

Of equal consequence is how the market around the Imperiale has changed. While last year the Benelli had to fend off an ageing Classic and a conflicted Jawa, it now has to deal with the likes of the Honda H’ness CB350 and the Royal Enfield Meteor -- the former has already been launched at a cheaper asking rate and the latter is expected to follow a similar pattern soon. In many cases, the might of the Honda badge and the spread of RE’s service network alone will be enough to draw buyers away from the Benelli, without even considering that they’re both better equipped, more modern and lighter motorcycles. So, unless Benelli can somehow slash 15% off its price, we recommend you hold onto your cheque books until we can put these three titans head-to-head. It’s going to happen soon enough, so stay tuned to ZigWheels!