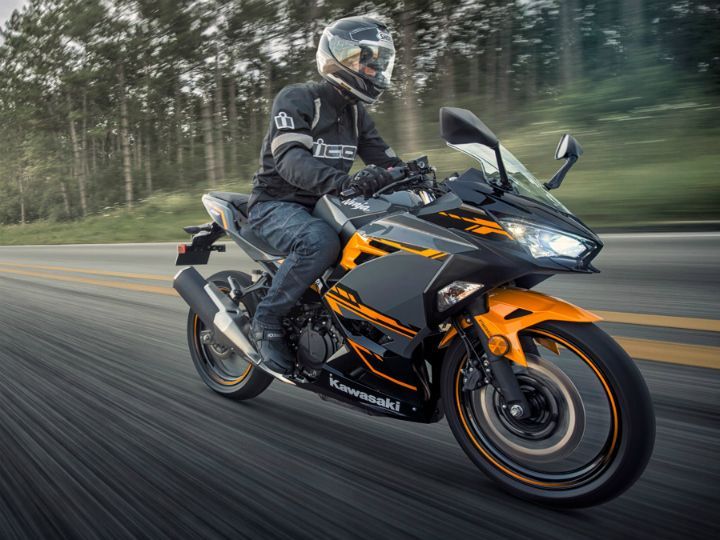 The Kawasaki Ninja 400 takes a lot of inspiration on the design front from the bigger Ninjas. It looks big and intimidating with its dual LED headlamps that’s covered by a sharp cowl. The front cowl is also sharply cut and the indicator lights are embedded like gems on the side of the fairing. The fuel tank is bulky and has fine lines that further gives it an intimidating look. It gets a typical two-piece saddle with the pillion on a higher height than the rider. The number plate holder is attached under the tailpiece and acts like a rear mudguard of sorts.

The bike’s heart is made up of a 399cc parallel twin, four-stroke, water-cooled engine and it produces 45.6PS at 10000rpm and a peak torque of 37.9Nm at 8000rpm, whilst mated to a six-speed gearbox. The new motorcycle gets 41mm front forks and a 5-way adjustable monoshock absorber at the rear for suspension. Braking duties are handled by a 310mm semi-floating petal disc at the front and a 220mm petal disc at the rear. It gets 17-inch 5-spoke alloy wheels at both ends while the radial tyres are from Dunlop.

For comparison's sake, its smaller sibling, the Ninja 300’s ABS version retails in the USA for $4999 (roughly Rs 3.21 lakh) while the non-ABS version of the elder and newer Ninja 400 will sell for the same price. The bike is expected to make it to Indian shores around the first quarter of 2018. It will go head on with the KTM RC 390, Yamaha YZF-R3 and Benelli 302R. We expect it to cost around Rs 4 lakhs (ex-showroom) when it makes its way here.