The charm of a four door coupe with the efficiency of a diesel, the CLS-Class is now offered in the right combination for India. So should you buy one? 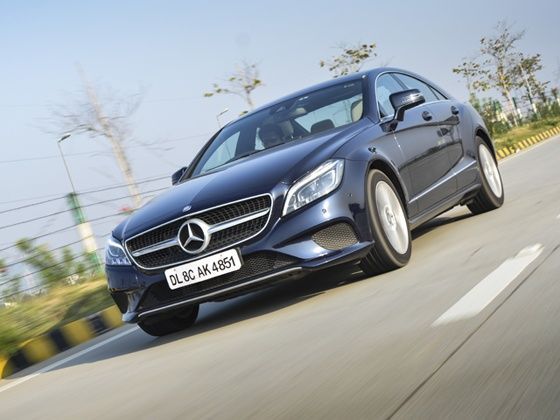 A fleeting glance at the CLS-Class will never let you guess its age. The car in these pictures is the 2015 Mercedes-Benz CLS-Class, a four door Coupe in the fifth year of its second generation and even five years down the line, it looks as hot as ever, maybe a bit more after the facelift. But just as few guys like a sexy high maintenance girl, fewer in India like a car that guzzles petrol. So while Mercedes-Benz has upped the bling on the CLS, has also given it an oil burner to save you from wallet burns. Should you buy one now? We find out

For 2015, the CLS-Class gets a few updates that work for me but has polarized opinion among my colleagues. They say it’s not as pure and original as before, a scaled up CLA-Class and all that Jazz. But quite frankly, the CLS-Class is the original four-door Coupe, and without its existence, the CLA wouldn’t see the light of day. Sure it’s designers have tried to make the CLS more acceptable to the masses than it ever was meant to be but you can’t blame a Company for wanting to make more money, can you?

The update gives the CLS-Class a new grille, single slat with the diamond mesh pattern we’ve become accustomed to on recent Mercedes cars. The bumper is new as well, neat and simple with large air dams. And then there are the new headlights of the CLS, the biggest update to the car. Automotive lighting technology is at the peak of development right now and Mercedes wants to showcase its prowess with every new car. The CLS gets Mercedes’ Multibeam LED light system, a system that houses 36 LEDs, 24 of which can be controlled individually. A camera on the windscreen surveys traffic conditions and relays information to control units that alter light pattern to prevent dazzling for oncoming motorists. So while you are being considerate to other drivers on the road, you are looking damn good doing that. Rest of the car looks the same and feels as special as before – frameless doors, the sexy swoopy silhouette and those attractive petal shaped taillamps.

Not quite like the exterior of the CLS, the interior is beginning to show its age. It’s beautifully finished and quality of materials is top notch but it’s not as inviting as it should. This could be due to the choice of combination trim on our test car, light faux-wood trim with beige upholstery. I’d rather prefer the white leather and black trim combination so the good news is that you are offered four contrasting choices. The busy centre console however is too old-school now for my liking. What’s nice are the front seats, well bolstered, large and electrically adjustable with memory function. The rear seats are comfortable too if a bit claustrophobic, a price one pays for the dropping Coupe roofline. The window openings are small too and getting in and out isn’t easy. Again, it’s something you don’t mind for the kind of space and comfort the car offers.

The big change on the inside however is the large upright infotainment screen on the dashboard. It is also internet enabled so you can use apps and radio using your phone’s internet when paired to the car. The 360 degree parking assistant is a feature you will use a lot to deftly get the long and wide CLS into tight spots. Then there’s paddle shifters, panoramic sunroof, a high quality 14 speaker Harman Kardon  music system, two zone climate control, satellite navigation and ambient lighting.

If there is one thing the CLS-Class lacked, it was a diesel engine variant. The CLS was only offered with a turbocharged 3.5-litre petrol V6 until now. Not only has Mercedes introduced a 2.1-litre four cylinder diesel CLS 250 CDI with the update, but discontinued the slow selling petrol altogether. Considering the CLS is a CBU, it could still have had the petrol among its fold but Mercedes thinks otherwise. The diesel engine is a number churner for the German carmaker in its 170PS form, but in the CLS it makes a lot more. 207PS to be precise and a healthy 500Nm of torque from 1600rpm and that means despite the 1.85 tonne kerb weight, the CLS is no slouch. Sure it’s no match for the V6 but the diesel mill does decent speeds with little fuss. 0-100kmph comes in a claimed 7.5 seconds. It also doesn’t feel as coarse as in the C-Class, possibly due to better NVH levels.

The CLS builds up speed well, power delivery is linear and gearshifts are smooth and intuitive. The 7-speed dual clutch gearbox has been further improved for the CLS for shift quality and adjusting to varying throttle and that does add to the driving experience. The CLS is now a relaxed cruiser that can be used a lot more often to munch highway miles. What we would have liked though is the 3.0-litre V6 diesel from the E350 CDI in the CLS because the sporty dimensions only deserves a larger heart to beat.

Ride, handling and ease of driving

The CLS is meant to be a tad bit sportier than the E and the ride as a result is just that bit stiffer. You probably wouldn’t even notice in the Comfort setting as the Airmatic suspension works its magic on the tarmac. It gets firmer in Sport but still not hard enough for discomfort. You can also raise the ground clearance by 30mm to clear those annoying speed bumps that have a thing for long wheelbases. The CLS is very usable as a result in the City or the highway.

Its dimensions however require you to drive the CLS carefully in traffic. The car sits low and wide and has a small greenhouse. It’s not uncomfortable to the point of a neck catch but on our unruly roads and due to general disregard for rules, its best to proceed with caution. Around corners, the CLS throws its weight a fair bit and the steering although weighs up, doesn’t send much feedback. So sporty as the car tries to be, it’s not one for the enthusiast.

The CLS 250 CDI is rated at a EU efficiency figure of just under 20kmpl. We couldn’t do a fuel run to get you a real world number but going by the average our long term E250 CDI used to get, the CLS 250 CDI will get you between 13-14kmpl on average.

The smaller engine gets Mercedes to price the fully imported CLS more aggressively too. At Rs 76.5 lakh, ex-showroom Delhi, the CLS 250 CDI is Rs 13.5 lakh cheaper than the outgoing CLS 350.

A nice set of headlights, that slippery silhouette, a frugal diesel engine, luxury and practicality of a saloon and a price tag that’s a lot more tempting than before, makes the CLS very alluring. It’s not the youngest when you step inside the cabin and the 4-cylinder diesel engine doesn’t do justice to its sporty appearance but at Rs 76.5 lakh, it’s not high up in that price bracket where running costs don’t matter. The sexy CLS in this 250 CDI guise is now also a practical luxury car for the discerning elite.