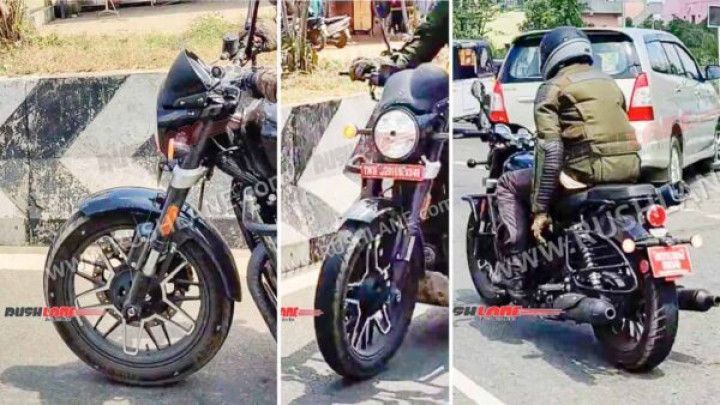 Royal Enfield’s latest 650cc Bobber, the Shotgun 650, has been spotted road testing with dual-tone alloy wheels. RE has been working on three motorcycles based on the 650cc platform, namely the Super Meteor 650, Classic 650 and the spied Shotgun 650. The motorcycle was first showcased at the EICMA 2021 as a bobber concept, and now that a test mule is spotted, it can be expected to launch later this year.

First things first, the RE Shotgun 650 will be powered by the same 648cc parallel-twin engine as the Interceptor 650 and Continental GT 650. The Shotgun 650 can be expected to produce the same power, which is, 47.6PS and 52Nm, as no details have come up regarding tuning.

The RE 6550cc Bobber flaunts a tear-drop shaped fuel tank, round headlight and taillight setup, along with broad front and rear fenders that give it a retro-styled design, a signature style of the brand.
As seen in the spy shots, the bike gets a split seat setup instead of the single bobber-style floating seat showcased on the concept. The Shotgun also features a low-set handle bar and mid-mounted foot pegs that demand a bit more committed riding position. The instrument cluster design (similar to the one on Meteor 350) and the dual exhaust pipe setup remains the same as showcased on the concept.

The Shotgun 650 is suspended on a USD fork up front and twin shock absorbers at the rear. The bike is seen riding on dual-tone alloy wheels in the spy-shots, which might be available as an option.

The Royal Enfield Shotgun 650 will make its India debut post the Super Meteor 650 and is expected to hit Indian roads by later this year or early 2023 for a sticker price of around Rs 3 lakh. The Shotgun 650 looks like an interesting addition to RE’s portfolio and could be the most unique product in the 650cc lineup after the Continental GT 650.