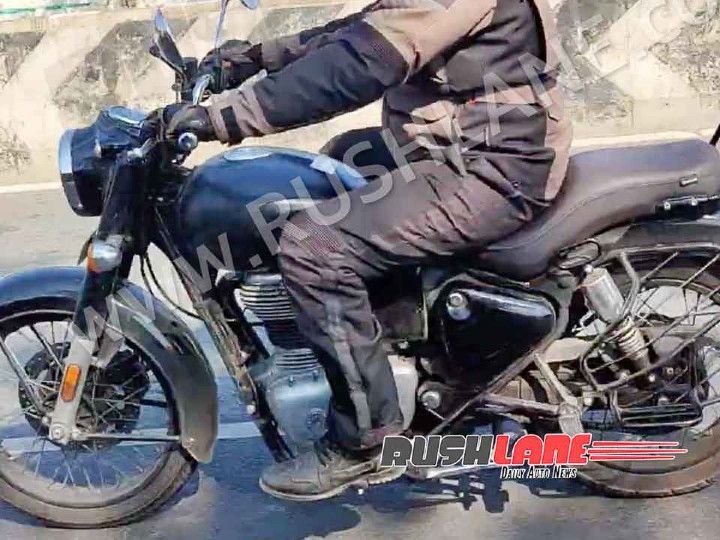 It was bound to take place sometime or the other as time has run out for Royal Enfield’s UCE engine. Yep, the Bullet 350, which is the sole surviving member with the old school mill, is set to receive a comprehensive makeover, just like its sibling: the Classic 350. The new Bullet 350 has been spotted on test and it virtually looks identical to the Classic 350.

Only when you start dissecting the images, do you start to notice the key differences. Firstly, the mudguards are larger, the front one has a plastic rear section and the rear one is more of a curved rectangle than a circle. The fuel tank is missing the rubber tank grips and the filler cap is rectangular. The oval throttle body covers give way for a more traditional rectangular one. Yep, you get the theme now? The only non-rectangular thing on the bike which is a bit of a deviation from the UCE model is the tail lamp.

The most deadliest giveaway that it is the Bullet and not the Classic though is the single-piece seat. The one on the test mule has a dark tan colour but that is likely to be part of RE’s GMA catalogue’s Touring seats.

The rest of the bike remains the same as the Classic 350, it seems. The split double cradle frame, the telescopic fork with metal sleeves, the simple twin shocks at the rear and spoke rims are all identical to the Classic. Heck, we figure that even the J-platform’s 349cc mill (20.4PS and 27Nm) will run the identical throttle map and ignition timing.

We believe that Royal Enfield could launch this bike either late this year or, more realistically, by February 2023. It will be the most affordable bike in the portfolio and hence see its asking price to be around Rs 1.80 lakh (ex-showroom).