The 2021 Ducati Monster Faces Its Competition

Well, not literally yet, but let's just see if the Monster can once again rise to the top of the pile 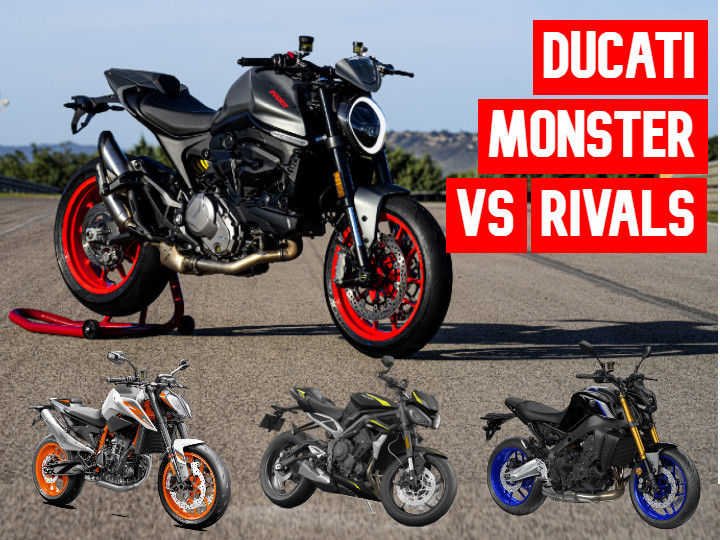 As controversial as the new design of the Ducati Monster may be, there’s no denying the fact that Ducati’s new approach for its middleweight naked is sure to make this already hotly-contested segment even hotter. The competition is just so fierce that we could have added another 3 or 4 bikes to this comparison. The reason why we stuck to the cream of the crop is simple: Ducati used to be there and now it wants to get back there. Can it?

Despite having the lowest engine displacement of the quartet, the Triumph Street Triple RS is the most powerful bike in this power-packed comparison. In fact, the lumpy Kawasaki Z900 with its inline-four engine makes just 2PS more. Triumph has worked upon this engine quite a bit to improve its mid-range performance, thanks to its exploits in Moto2. Plus, there’s the aural ecstasy of its exhaust note replete with the characteristic whistle and growl.

While the rest might remain stuck to the tail of the Brit naked on a race track, out in the real world, the other three might just gain the upper hand. Firstly, the torque deficit to the Monster and the Yamaha MT-09 SP is 14Nm and the large Duke has 6Nm more at its disposal. And since all four of these bikes weigh nearly the same, the 890 Duke R is sure to leap forwards like a predator hunting down its prey.

All four motorcycles here have an exhaustive suite of rider electronic aids. Multiple rider modes, traction control, switchable ABS and a bi-directional quickshifter are present as standard on all four. It is the Triumph that misses out on IMU-aided aids, making it the least fussy bike in terms of electronics. The rest three have their strong suits and are a rung above the Triple here. We just feel that in the real world, the Ducati’s hydraulic clutch with a radial master cylinder will make life a lot simpler for the majority of riders.

As blasphemous as it is, Ducati’s decision to ditch the trellis frame is a wise one after considering the benefits of the new Panigale V4-derived monocoque front frame. We will have to see how much of an improvement this new frame has made in the riding dynamics of the Monster and whether it can outhandle the king: the Triple RS.

The Ducati has the least sophisticated suspension of the lot here, only allowing the rider to adjust the rear preload settings. The other three are running almost similar levels of hardware, with lots of adjustability to tune the ride for different scenarios. The KTM 890 Duke R has a slight edge here as the WP Apex monoshock has compression damping adjustable for low and high speed riding, a feature found mostly on litre-class superbikes, not middleweight nakeds.

The Super Scalpel knocks it out of the park with the Brembo Stylema calipers and the Michelin Power Cup Evo. The brakes are currently the best in the business and the rubber chosen is just as grippy as the Supercorsas of the Triple RS. We are surprised that Ducati didn’t opt for the Brembo M50s like the Triple RS, which offer significantly better braking performance than the M4.32s.

It comes as a bit of a shock that the Super Scalpel has the longest wheelbase in this company. On paper at least, it doesn’t have the sharpest steering geometry of the lot and that tall seat will be an issue for short riders.

The king of the segment -- RS -- just aces it in every department: sharp steering, short wheelbase, low seat height and a large fuel tank. Be it the highway run or hunting down apexes, the Triple will surely reward the confident rider.

Every motorcycle here has areas where they truly shine and bring about the excitement and convenience that one desires from a middleweight naked. This versatile genre of motorcycle truly goes underappreciated, not getting enough hype and frenzy as sportbikes and adventure bikes do. But the question at the start was, can the Ducati Monster finally rise to the cream of the crop? The short answer: yes. Ducati has packed in enough goodies and made its chunky Monster ripped to cause some serious troubles to the others here.

It will be premiumly priced and that’s going to be its biggest hurdle to overcome. Paying a significant amount more than the Triple RS and not getting sophisticated suspension units or advanced braking hardware will not make for great purchasing sense.