Is This The New Ducati Monster Or A Funky Brutale?

Where are the iconic Monster elements? 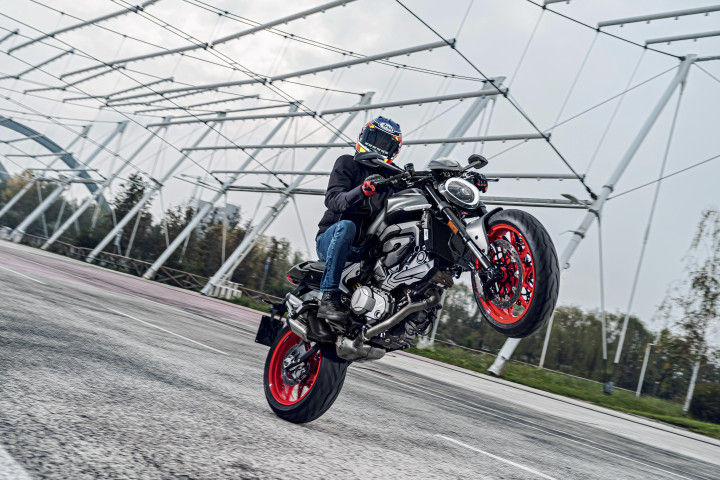 No exposed tubular steel trellis frame, no round chunky tank and not even a proper circular headlamp -- it just feels weird to see the new Ducati Monster. But 2020 has been pretty much weird from the start, so who can blame Ducati if it redefined the classic Monster elements to give us a naked motorcycle that is similar to its Varese cousins.

This feeling that it is more of a MV Agusta Brutale and not a Monster stems from the new not-so-circular-but-diamond-like headlight. The shape is unmistakably MV Agusta, although the actual headlight bits, which are LED, don’t quite look the same as the Brutale. There’s a lot of muscle toning of the fuel tank, undergoing a transformation from its earlier chubby state. The tail, now made out of Glass Fibre Reinforced Polymer and not steel, is sleek and minimalistic.

Ducati has worked a lot on improving the rider’s triangle on this new Monster. From the 821, the handlebar is pulled closer to the rider by 70mm. This combined with extra degrees of steering lock and a not so constricted lower body posture should make city riding a breezy affair. Ducati claims that the lofty 820mm seat height should not bother most riders as the bike has a very slim midsection, helping out even the vertically challenged rider in flat footing this middleweight naked.

This slimness has been achieved by ditching the trellis frame (Sob!) for a Panigale V4-derived aluminium monocoque front frame, bolted directly onto the engine. Aside from the benefit of being a slimmer unit, the front frame weighs just 3 kilos, saving 4.5kg over the old trellis of the 821. The weight saving business doesn’t end there. The GFRP tail helps in shedding 1.9kg, the wheels and swingarm combined weigh 3.5kg less, and the 937cc engine is 2.4kg lighter. As a whole, the new Monster is 18kg lighter than the 821 sans fluid, which at 166kg is joint lightest in the class with the KTM 890 Duke R and the Triumph Street Triple RS.

In the past couple of years, the 821 motor seemed a bit too bland for the Monster name. And with the competition getting stronger and either going mental or more sophisticated, team Bologna had to do something. Thus, by opting for the same 937cc Testastretta 11 DVT L-twin as the SuperSport 950 and the Multistrada 950, the new Monster does finally have an engine befitting the name plus the right balance between being maniac and sophistication.

More power on tap is always welcome, the new engine putting out 111.5PS at 9,250rpm, 2.8PS more than the old 821. What riders will appreciate more is the added torque benefits. 93Nm at just 6,500rpm is not only 7Nm more than the before but also produced at a thousand revs lower, giving it a better spread of performance. These are good numbers for the class, capable enough to compete with the Duke and the ’Triple.

One can hardly ask for more rider aids from the Monster than what Ducati has already equipped it with. Hydraulic slip and assist clutch (with a Brembo radial master cylinder for better control, might we add), lean-sensitive traction control and ABS, three riding modes (Urban, Touring and Sport), Wheelie Control EVO, Launch Control EVO and a bi-directional quickshifter are to be found on the bike.

No fully-adjustable suspension here on the Monster. The 43mm USD fork and preload-adjustable monoshock handle the suspension duties here. Brembo braking hardware is found on the bike. The use of the M4.32 monoblocs is a bit of a downer. The same units might be present on the Street Triple R but given that this Monster would be priced above the Triple RS, having the more superior M50s would have improved its case. It does get a front Brembo radial master cylinder though, which is also found on the Triple RS and not on the R. Lastly, Pirelli Diablo Rosso 3 tyres are the ideal choice of rubber for Indian road conditions. The Supercorsas might have the edge on grip, but they aren’t as wet-weather friendly, will not last as long and will be significantly pricier than the Rosso 3s.

Ducati also offers the Monster in a Plus variant, which is nothing but the addition of a front visor and a seat cowl. Both the Monster and the Monster Plus are available in three colours: Ducati Red, Dark Stealth and Aviator Grey, the latter being our choice as it comes with GP Red wheels. There’s tonnes of customisation on offer, Ducati even providing vinyl kits suit the buyer’s tastes.

The Monster is the Italian brand’s highest selling product ever and this new model, while redefining traditional Monster elements, is set to offer an equally exciting riding experience that the series is known for. That said, the pricing for the Monster could be around Rs 13 lakh for the standard variant and the Plus could bear a premium of around Rs 1 lakh more. That is certainly going to be a big hurdle for many naked enthusiasts as the likes of the Triumph Street Triples and the BMW F 900 R are priced significantly lower. And whenever KTM India does decide to bring in the 890, it will still not be as dearly priced. But will Italian flair trump British sophistication, German excellence and Austrian craziness? We just cannot wait for 2021 to arrive.