Would You Like To See An Open-Top Volkswagen Electric Car?

The ID.3 convertible concept has been previewed on VW’s social media handles, and could become a reality if it does generate enough interest 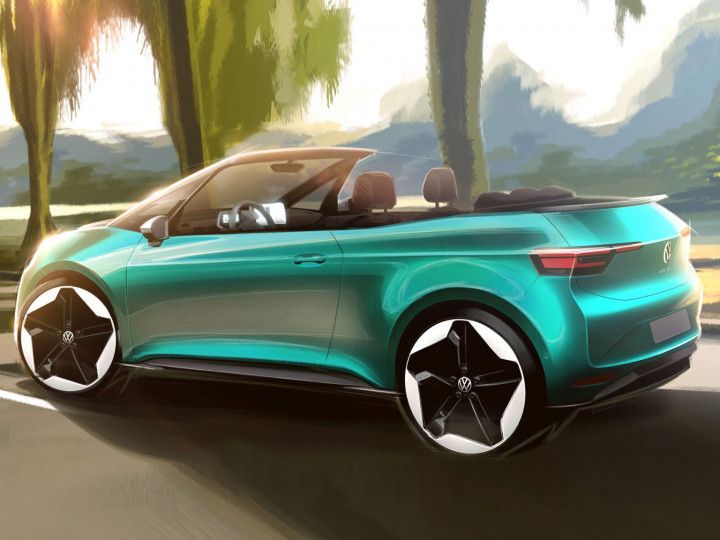 Volkswagen has previewed the ID.3 convertible concept on its social media handles. Now, before your excitement hits the roof, know that the concept might not go into production just yet. VW CEO Ralf Brandstatter posted on LinkedIn that the company was still mulling the idea of making this a reality.

That said, the ID.3 convertible would be a one-of-its-kind, considering it would be the first all-electric hatchback to have a  convertible roof. The concept looks smarter than the standard model, with the rear doors having been ditched for a sportier demeanour. And to accommodate the convertible roof, the rear-end is more upright now, which could result in reduced boot space (with the roof down) and legroom.

If it does see the light of the day, we reckon the ID.3 convertible would retain the minimalist dashboard of the standard model, which is not a bad thing. So, you’d get two screens -- digital driver’s display and touchscreen infotainment -- with a host of touch controls to access the main functions. With the rear doors being given a miss, one would need to roll down the front seats to get to the back seats, which is more tedious than just opening the back door.

Also Read: Suzuki Will Have An Electrified Future For India

Of course, it’s too early to talk about the powertrains of the ID.3 convertible, considering the model is still in its conceptual stages. However, if it does become a reality, we think it would be powered by either of the electric powertrains of the standard model. Read about it here.

It’s the second mass-market VW that could be offered as a convertible (the first being the T-Roc that’s sold in Europe). Nevertheless, an open-top hatchback with a whisper-quiet powertrain does sound like a tempting idea, especially if you fancy the ‘wind-in-my-hair feeling.