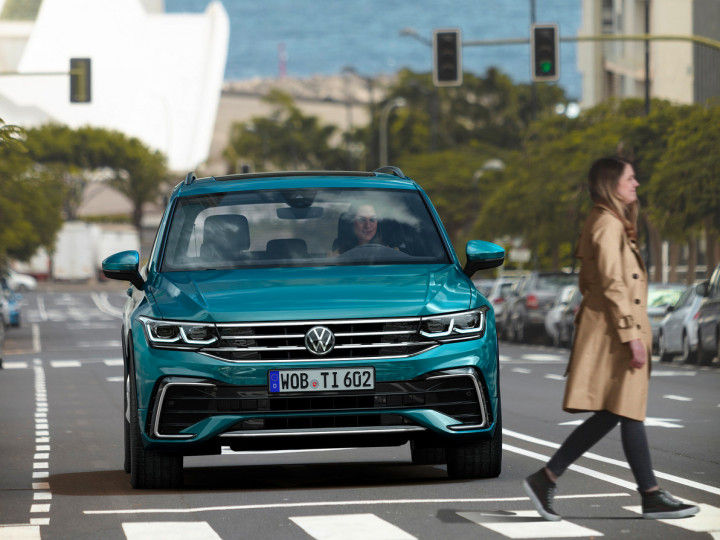 Volkswagen India is currently revamping its portfolio under the India 2.0 strategy. With SUVs under the spotlight, the manufacturer has laid out plans for three SUVs for India: T-ROC, Tiguan Allspace, and the upcoming highly localised Taigun. Now, brand director Ashish Gupta has told ZigWheels in our ‘Meet The Leaders’ series that a fourth surprise SUV would be revealed in March.

We reckon this could be the facelifted Tiguan 5-seater, although Mr Gupta has said he won’t place his bets on it. VW has already begun testing the SUV undisguised in India. The upcoming model will be powered by a turbo-petrol engine, unlike the diesel in the pre-facelifted model.

The new engine in question should be the 190PS/320Nm 2.0-litre turbo-petrol, as hinted by the ‘4Motion’ badge at the back of the test mule. VW provides the Tiguan 2.0-litre petrol in Europe with an AWD, but not the smaller 150PS 1.5-litre TSI petrol. All this has led us to believe that the new Tiguan could get a bigger engine, likely mated to a 7-speed dual-clutch automatic.

Save for the new steering wheel, touch-based climate control interface, and the digital driver’s display, the interior of the facelifted Tiguan will remain similar to that of the pre-facelift model. Other new features likely to be part of the package include connected car tech, wireless Apple CarPlay and Android Auto, and a wireless phone charger.

The upcoming Tiguan is likely to be priced from Rs 28 lakh (ex-showroom), putting it in the same league as the top-spec Jeep Compass Model S and Citroen C5 Aircross. It will be sold alongside the larger 7-seater Tiguan Allspace, which is powered by the same engine and retails from Rs 33.24 lakh (ex-showroom).