The Street-friendly Thruxton To Ride In On April 24 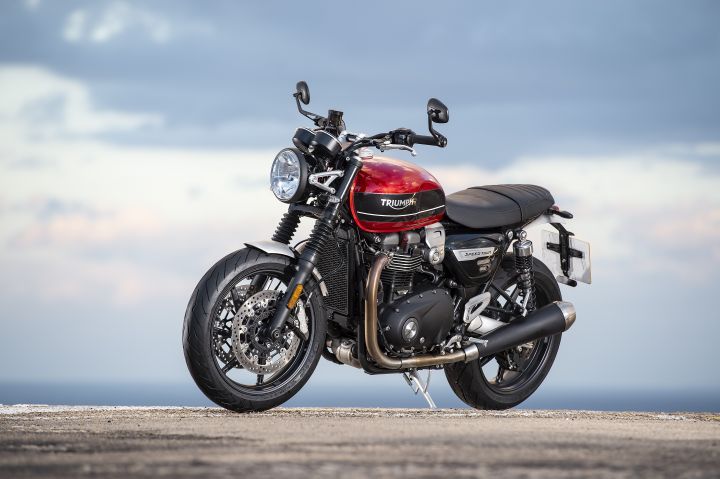 Triumph India has sent out a ‘Block Your Date’ for April 24 with a silhouette of a motorcycle which we can safely deduce is the new Speed Twin. Based on the Thruxton cafe racer, the Speed Twin is Triumph’s most accessible 1200cc motorcycle from the Bonneville family. In foreign markets, the Speed Twin is the cheapest of the 1200s. While it is a bit hard for Triumph India to replicate the same pricing strategy in India (cheapest 1200 Triumph in India is the Bonneville T120 at Rs 9.97 lakh), we expect it to be priced around the Rs 10 lakh mark. All prices ex-showroom India.

One way that Triumph could keep the price of the Speed Twin lower than the Bonneville T120 is by bringing it down to India via the CBU route instead of CKD. The current tax structure on CKD kits has resulted in prices of Triumph bikes witnessing a steep rise. By getting it as a CBU, the base ex-showroom price of the bike can be kept lower than usual, like Triumph did with the 2019 Street Twin which was Rs 25,000 cheaper than its predecessor. However, this might force the buyer to pay a higher final price as certain states like Maharashtra and Karnataka, which levy a hefty tax on imports. We await further information from Triumph regarding the Speed Twin’s pricing strategy.

Unofficial bookings for the Speed Twin have begun at a few Triumph dealerships. The booking amount is the standard Rs 1 lakh that one needs to pay upfront to avail a Triumph motorcycle.

Although the Thruxton is a sporty motorcycle that can put many a supersport to shame, it is one serious motorcycle. Triumph needed something that kept the essence of the Thruxton intact in a more usable package. Hence, the Speed Twin was born. That said there are a few changes. The frame has a minute rake change, the downtubes are made from aluminium and are bolted on, it gets wide flat bars from the Speed Triple, the engine is lighter thanks to revised engine covers and it makes use of alloy rims instead of spoked ones. This makes the Speed Twin 7kg lighter than the Thruxton R.

Triumph had announced it would launch six bikes in India this year. Having launched the Street Twin, Street Scrambler and Tiger 800 XCa, the Speed Twin will be the fourth. The Scrambler 1200 XC will arrive next followed by one of the two limited editions of the Bonneville T120s which were showcased at EICMA last year.