Find the Thruxton R too extreme? Triumph has you covered with the new Speed Twin 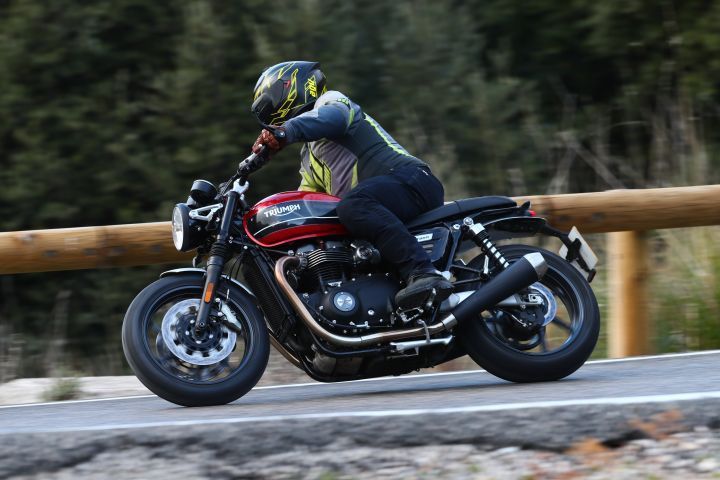 Even though the Speed Twin is based on the Thruxton R, Triumph has made some significant changes to make it more usable on a daily basis. At 1,530mm, the Speed Twin’s wheelbase is 15mm longer than the Thruxton R. Compared to the Thruxton R, the footpegs on the Speed Twin have been pushed forward by 38mm and lowered by 4mm. The bike gets a flat handlebar and even the thickness of the seat cushion has been increased by 10mm. Seat height stands at 807mm, making it a wee more manageable than the Thruxton R’s 810mm. To help riders customise their Speed Twin, Triumph is also offering over 80 accessories designed to enhance the styling, security and practicality.

The Speed Twin is powered by the same 1200cc liquid-cooled parallel twin engine as seen on the Thruxton R. It produces 97PS at 6750rpm and 112Nm at 4950rpm. However, the Speed Twin’s powerplant gets new magnesium cam covers and a revised clutch assembly which makes the motor 2.5kg lighter than the one found in the Thruxton R. The power is transferred via a 6-speed gearbox with a slip and assist clutch. Rider aids include ride-by-wire with three riding modes -- Road, Rain and Sport -- dual-channel ABS and switchable traction control. Additional features include a semi-digital instrument cluster, LED indicators, LED tail lamp and a standard engine immobiliser.

How do these changes affect the overall dynamics of the motorcycle? Well, head here for our review.

The Triumph Speed Twin doesn’t have any direct rivals but price-wise, its closest competitors are the Ducati Monster 821 and the Yamaha MT-09. However, considering the Speed Twin is a modern classic, it's an affordable alternative to the Kawasaki Z900 RS and the BMW R nineT. Triumph offers the Speed Twin in three colours: Silver Ice / Storm Grey, Korosi Red / Storm Grey, and Jet Black.