We list down five of the most iconic versions of the iconic MV Agusta F4, perhaps the most beautiful motorcycle to be launched in the new millennium, on the occasion of its 20th anniversary 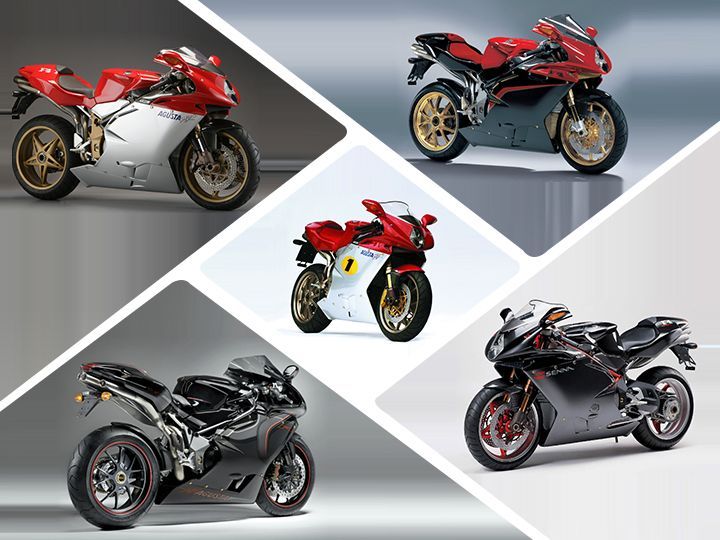 When you think about premium hand craftsmanship, you think about the Italians. Even among the Italians, there were few better than MV Agusta to come out with some of the best hand-built motorcycles of all time. Over the years, the company has created some of the most beautiful looking motorcycles, but the MV Agusta F4 series still remains their magnum opus. The beauty was created by renowned Italian designer Massimo Tamburini who had previously worked on the stunning Ducati 916. That was 20 years ago. Since then, we’ve seen several iterations of the F4 lineup, but there are some which stood out of even the impressive portfolio of MV bikes. Let’s take a look at the five best versions of possibly the most gorgeous motorcycle to ever hit the tarmac.
1) MV Agusta F4 750 Serie Oro (1999)

When Claudio Castigiloni lured his friend and world renowned designer Massimo Tamburini from Ducati, the expectations were high to resurrect the MV brand. Undoubtedly, Tamburini delivered, and the result was a beautifully designed bike that stunned one and all when it was unveiled on September 15, 1997. It was easily distinguishable, thanks to its now famous underseat organ-shaped exhaust system, sculpted body lines which had more curves than Kim K, a diamond-type headlight that sits like a crown jewel and a tubular steel trellis frame. True to its name, the Serie Oro utilised premium material like carbon fibre for body panels, and magnesium for wheels and a single sided swingarm.

The bike was powered by (then) all-new in-line four motors with double overhead camshaft 16-valve engine which was designed by Ferrari. The 749cc liquid-cooled engine pumped out 127PS of power and 72Nm of torque at 10500 rpm. The MV Agusta  F4 Serie Oro was introduced to the public in 1998 at the Milan Show, with a hefty price tag of $50,000 (Rs. 32 lakh). Being the first MV Agusta F4, the Serie Oro remains a popular motorcycle among collectors and prices have only increased with the passage of time and will continue to do so in future too. At first, it was largely panned by customers and critics alike. It was a good looking bike, but the average buyer flinched away due to performance and reliability issues. But after a few years, the limited edition bike was in every collector’s garage.

The MV Agusta F4 Senna was built as a special edition unit as a tribute to one of the greatest F1 drivers ever - Ayrton Senna who was a motorcycle freak himself. It was built for a noble cause as the money raised from sales were given to the Instituto Ayrton Senna, a charity founded by Ayrton Senna to aid the children of Brazil. The 998cc motor produced 175PS of power and 113Nm of torque at 9000rpm. It came with an alcantara seat, upgraded Brembo Goldline radial brakes, a forged silver Marchesini wheel and a 50mm titanium nitride coated Marzocchi USD fork. The 300 models that were produced retailed for $29,995 (Rs 19.2 lakh) each.

Giacomo Agostini was just another talented youngster from the streets of Bergamo when he was picked by MV Agusta to partner the legendary Mike Hailwood. But it was clear that Agostini wasn’t going to settle for a second place when he overcame his teammate in the famous Nurburgring Grand Prix. It was then when a 17-year association was formed. Together, Agostini and MV Agusta won 14 world titles, 10 tourist trophies and over 250 wins in different categories of racing. It isn’t an overreach to say that Agostini to motorcycle racing holds the same regard as Marlon Brando to movies, and Donald Bradman to cricket.

So, it was only deserving that MV Agusta launched the F4 AGO as a tribute to the legendary racer. The bike was draped in traditional red and silver shade which was the colour of MV’s GP bikes, and configured only to one-seater, staying true to its racing heretics. A special touch was the yellow sticker with the number ‘1’ on the fairing. The seat was covered in red, just like Agostini’s race bike. The riding position was much more comfortable, though, thanks to the adjusted footrests. The rev meter was white with the figures painted in blue, and also included the racer’s signature. There was also a 18K gold finished plate with the motorcycle’s serial number mounted on the steering head, signifying its limited production of just 300 units.

The bike was powered by a 4-cylinder 998cc engine which made 167PS of power and 109Nm of torque at 10200 rpm. Same as the earlier special edition models, the USD forks were treated with titanium nitride for low friction. The wealthy owners were also given a certificate of authenticity signed by Giacomo Agostini himself.

In 2005 MV Agusta paid tribute to the original MV F4 designer Massimo Tamburini by launching a special edition F4 in his name. When a designer gives his name to a motorcycle, it has to be special and the F4 Tamburini did make a visual impact like very few motorcycles. It featured a gold theme overall with anodized magnesium alloys and a single sided swingarm. The 50mm Marzocchi inverted fork sliders were treated with titanium nitride for low friction, and then anodized with gold. In typical Tamburini manner, it was designed entirely in carbon fibre, except the fuel tank. This overall use of carbon fibre gave the motorcycle an excellent advantage in the weight department.

This special edition bike was released in 2003, with only 300 models made available. It was the first F4 to come equipped with Torque Shift System (TSS), which helps the engine in achieving immediate response even at low revs. It also enables the engine to achieve maximum torque at a very low rpm, which is about 1000rpm less than the F4 1000 S. The 998cc engine transmitted 173PS of power and 113NM of torque at 9000rpm. And if the above didn’t move your boat, the F4 Tamburini had a top speed of 306.7kmph, yes this was 14 years back!

The MV Agusta CC is named after the man who singlehandedly resurrected the MV Agusta brand -  Claudio Castigiloni. Unlike many manufacturers who prioritize market demands, the MV boss gave in to his instincts and built a bike he always dreamed of. To realise this dream, he used every resource available to him and there were no holds barred when it came to costs. The bike still features the same trademark F4 design elements such as the quad exhaust underneath the seat or the uniquely shaped headlamp. The fairing is made entirely out of carbon fibre. The bike is entirely designed in black, except for the red lining emphasising the “CC” and the “F4” markings on the fairing. The instrument cluster came with personalized graphics, and the Alcantara seats were more premium fabrics. Almost all of the components were made as one-off items like fork feet, upper steering plate, steering dampers, the footpegs and the side stand as well. The protective mesh coat on the intake ducts and the tail section were crafted from titanium. Staying true to Castigiloni’s philosophy, the bike was designed not only to look good while racing on the track but also when it’s mounted on the stand.

The F4 CC is one of the most exclusive motorcycles you can buy, as production was limited to just 100 units making it among the rarest MV Agusta motorcycles ever made. The 1078cc engine pumps out 165PS of power and 125Nm of torque at 9000 rpm. It can reach up to a top speed of 304 km/h.