Only 44 units of this gorgeous motorcycle designed in collaboration with F1 driver Lewis Hamilton will be sold. Predictably, it doesn’t come cheap 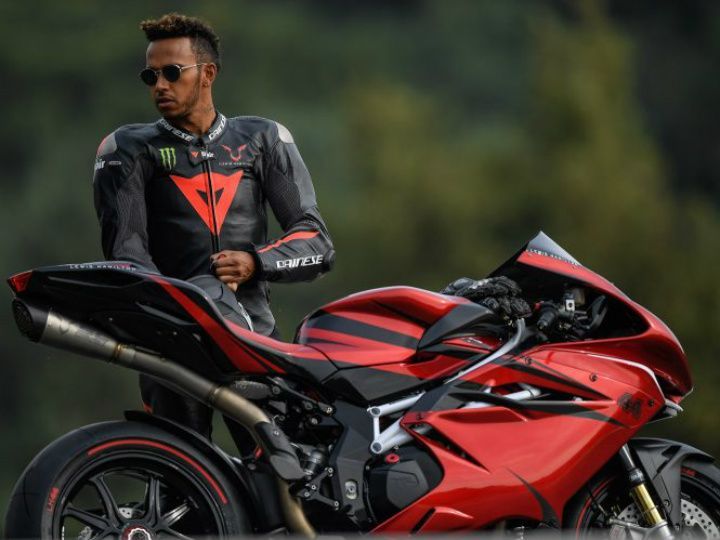 After posting teaser images on Twitter, MV Agusta has finally confirmed the launch of the F4 LH44. The F4 LH44 is a special edition based on the F4 and, in typical MV Agusta fashion, only 44 units of the bike will be made. Wondering what the LH44 stands for. Well, LH stands for Lewis Hamilton while 44 has been derived from the British F1 driver’s car number. This achingly gorgeous machine doesn’t come cheap. The F4 LH44 retails for £60,000, which translates to a whopping Rs 52.70 lakh (excluding taxes)!

The new bike will be powered by the same inline-4 cylinder motor seen on the MV Agusta F4 RC. This motor delivers 209PS of power at 13600rpm and 115Nm of torque at 9300rpm. If you opt for the additional race kit, you’ll get the lighter SC-project single titanium exhaust and a dedicated ECU that will boost the bike’s power output to 215PS. A lot of effort has been made to keep up with the brand’s racing pedigree. Apart from the lighter exhaust we mentioned before, the engine uses specially forged magnesium alloy parts too. However, there’s some bad news. If you reside in Europe, you cannot buy one of these bikes since they do not comply with Euro-IV norms. Hence, the company will be targeting the US as the bike’s primary market.

The F4 series is known for its trademark design and impeccable Italian craftsmanship. Over the years, the company has produced some gems like the MV Agusta Serie Oro, MV Agusta Tamburini, and the MV Agusta Ago. Just like these bikes, the MV Agusta F4 LH44 too will be a head-turner thanks to its Candy Apple Red fairing and the blacked out engine. There is also a smoked flyscreen, a first for any production MV Agusta motorcycle. The quilted saddle has been handcrafted from high quality natural leather and Alcantara. The engineers have used carbon-fibre extensively to reduce the weight of the bike as well. Special attention has also been paid to dedicated components like the racing-style fuel cap and forged alloy wheels.

The F4 LH44 uses top-of-the-line cycle parts such as Ohlins USD NIX 30 TiN-coated forks at the front. This unit consists of a separate function fork for compression and rebound. At the rear, damping is done via mechanically-adjustable Ohlins TTX 36 monoshock absorber with piggyback reservoir. The trademark gold outer tubes have been replaced with anodised black forks for the special edition. The rear spring and shock reservoir also gets the same treatment and gives the motorcycle a premium look.

Italian tyre maker Pirelli have designed a special set of tyres for the F4 LH44 called the Diablo Supercorsa SP. The red sidewalls and the LH44 logo are sure to attract a lot of attention.

This is the second collaboration between the F1 champion and the Italian brand, the first being the MV Agusta Dragster RR LH44.

The new F4 ticks all the boxes when it comes to aesthetics and design, but it severely lags behind its competition thanks to the outdated engine and specifications. All we can do for now is to hope that MV Agusta will introduce an all-new F4 in the coming years.