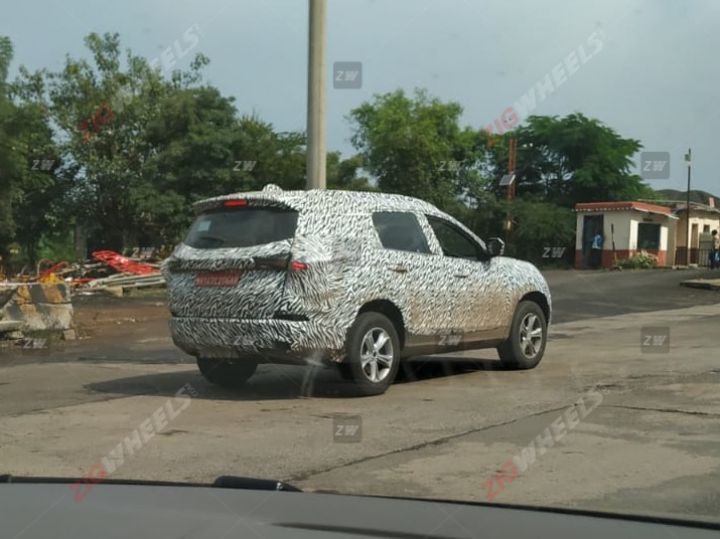 Currently, the Mahindra XUV500 is the only midsize SUV in its segment to come with three rows of seats. However, Tata Motors plans to spoil the party soon with the introduction of the Harrier 7-seater. The upcoming SUV was spied testing on the outskirts of Bengaluru recently and here’s what we could gather from the images.

Visually, the Harrier 7-seater gets major changes in the side profile and rear section. Not only does it look longer than the standard version, the Harrier 7-seater has a longer rear overhang as well. The roofline is taller and features a bulge above the rear quarter glass to ensure that third row occupants have ample headroom. Then, there’s the more upright tailgate along with the redesigned LED tail lamps that flows well with the revised design. While the front-end of this test mule hasn’t been spied, earlier spy shots suggest that the new variant will look identical to the standard SUV.

Inside, the Harrier 7-seater is expected to come with the same dashboard as the standard version. That said, expect Tata Motors to use a different colour theme to differentiate it from its smaller counterpart.

Recently, a Harrier was spied testing with a panoramic sunroof and dual-tone alloy wheels. We expect the same to be offered with the 7-seater version as well. The three row SUV will borrow a ton of features from the standard SUV, including the 8.8-inch touchscreen infotainment system with Android Auto and Apple CarPlay, climate control, coloured multi-info display, cruise control, keyless entry with push button start, automatic headlamps as well as a rain-sensing wipers. Other nifty features include terrain modes as well as drive modes.

Safety features such six airbags, ABS with EBD, rear parking sensors with camera, electronic stability program, high-speed alert as well as driver and co-driver seatbelt warning are expected to be offered as standard.

Under the hood, the 7-seater version will continue to use the 2.0-litre Fiat-sourced Kryotec engine, albeit with updates to meet BS6 emission norms. The BS6-compliant version is expected to put down more power (170PS) than the current version (140PS). Apart from the standard 6-speed manual gearbox, Tata Motors is expected to offer a 6-speed automatic sourced from Hyundai as an option as well. The automatic transmission and the higher-spec engine will, in all likelihood, be offered in the standard SUV as well.

The Harrier 7-seater was first revealed at the 2019 Geneva Motor Show as the Buzzard. That said, Tata Motors is unlikely to call it by this name in India. We expect Tata to reveal the SUV and its official name at the 2020 Auto Expo. When launched, the Harrier 7-seater will rival the Mahindra XUV500 and the MG Hector’s 7-seater variant, which is expected to be introduced soon.