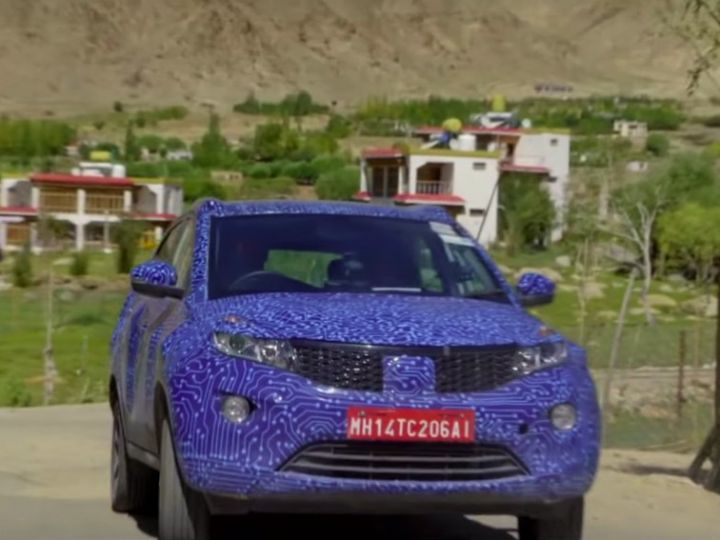 Tata Motors seems to be running up the mountain when it comes to adding electric cars in its model range. Just yesterday, Tata Motors Electric Mobility announced the launch of the Tigor electric vehicle (EV) with an extended range of 213km and a starting price of Rs 9.44 lakh (ex-Delhi). But that isn’t even what we are talking about today. We now have more details of the upcoming Tata Nexon EV, which will be an upgrade over its petrol/diesel counterparts. It is expected to launch around the Auto Expo 2020 in February next year.

Last week, Tata had announced that its Nexon electric vehicle was already being tested and driven on the popular Manali-Leh route in the Himalayas by celebrities Milind Soman and Ankita Konwar, as part of the #TheUltimateElectricDrive campaign. A recent video for the campaign gave us a sneak peek inside the cabin of the electric SUV. It reveals a semi-digital instrument cluster which looks closer to the one we find on the bigger Tata Harrier SUV. However, we believe it will sport a different set of graphics on the instrument cluster to better suit the needs of an EV user. So instead of the fuel reading, we could get a charge meter, as well as some readouts about battery health, range, and even drive modes.

We also noticed in this video that the Tata Nexon EV gets its charging port placed where the fuel cap for the conventionally-fuelled car. This is similar to where it is located on the Tigor EV. Earlier, Tata had also announced that the Tata Nexon electric will be their first electric car to come powered by Tata’s Ziptron high-voltage electric powertrain. Tata Motors claims that the Nexon EV is designed with Indian traffic conditions in mind. It features liquid cooling for the battery, which is held within a high-strength-steel shell. The casing has been rated with Ingress Protection 67, which should help maintain the 8-year warranty Tata will offer on the Nexon EV. It is expected to be priced in the range of Rs 15 lakh-17 lakh.

Tata Motors aims to be a key player in the domestic market for EVs, and they have two more electric cars to be launched after the Tigor EV. Apart from the Nexon EV, Tata Motors revealed an Altroz EV in May this year, which is also slated for a 2020 launch.

The Nexon EV is expected to hit the roads in early 2020. Its primary competitor will be the XUV300 electric vehicle, which has also been spied testing. Mahindra Electric, creator of the revolutionary e2O and the e-Verito, is working on Nickel Manganese Cobalt (NMC) Lithium-ion battery technology for its upcoming cars.