11 riders led by the Indian Army will cover a distance of 1,000km 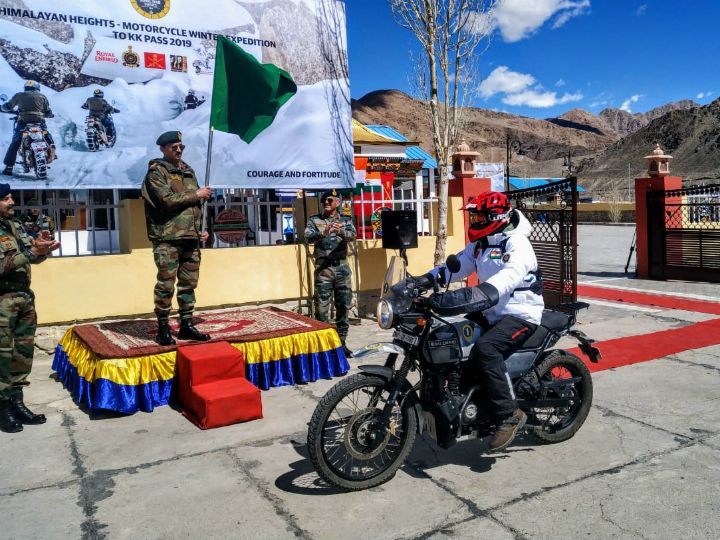 Royal Enfield flagged off its first Himalayan Heights Expedition on Sunday. The 14-day expedition started from Karu Military Station and will conclude at the Karakoram Pass. A group of 11 bikes led by an Indian Army team comprising of riders from Army Service Corps, Royal Enfield and Himalayan Motorsports will cover a distance of 1,000km during this trip. Royal Enfield claims that this route is likely to qualify for inclusion in the record books as it has never been explored extensively by any biker in the world.

What the riders needed during this trip was a motorcycle that can not only take on the rough terrains but also act as a highway cruiser. Enter the Royal Enfield Himalayan. As of now, the Himalayan is the most affordable off-roader in India, until the Hero XPulse 200 is launched.

The adventure tourer is powered by a 411ccc single-cylinder engine, which puts out 25PS of power and 32Nm of torque. Transmission duties are taken care of by a 5-speed gearbox. It features 41mm telescopic forks at the front with 200mm of travel and a rear monoshock with 180mm of travel.

14 days, 11 bikes and 1 dream expedition, the Himalayan Heights winter bike expedition from Leh to KK Pass will cover over 1,000 km and is likely to qualify for inclusion in the record books. This road route initially used as the Afghan trade route has never been explored by any biker in the world. The expedition is led by Indian Army team comprising riders from Army Service Corps, Royal Enfield and Himalayan Motorsports.

The Team is ready to brave all odds in the unforgiving terrain and the extreme climate of the region, to complete a motorcycle expedition to Karakoram Pass. In this 20th Anniversary of the Kargil Vijay Diwas, such adventure activities undertaken by brave Army personnel including women officers serve to renew and rekindle the spirit of fortitude, courage and adventure synonymous with the Indian Army.