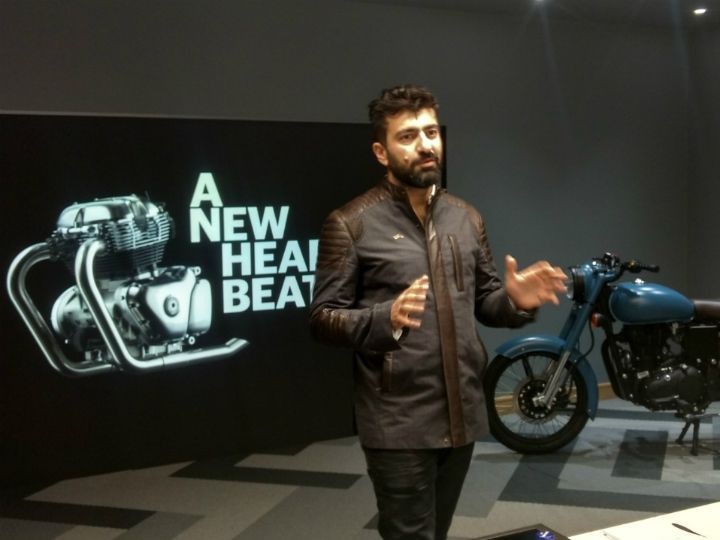 So after making everyone wait for a long time, Royal Enfield has finally uncovered its new twin-cylinder engine at its Technology Centre in Leicestershire, England. The new motor will have a displacement of 648cc and will be the highest displacement modern engine from the legendary brand. However, Royal Enfield (RE) haven’t revealed the bike yet and we will have to wait till the 2017 EICMA motorcycle show to get our first glimpse of the new parallel-twin-powered motorcycles. The new engine plays a vital role in RE’s plan of making a bike that will help it dominate the mid-displacement segment of motorcycles globally. Also, RE felt that it needed a more powerful motorcycle for existing owners to upgrade while simultaneously attracting new buyers in international markets.

Talking about the new engine, it’s a ground-up effort and RE officials stressed on us the fact that it hardly shares any component with the existing powertrains from its portfolio. The engine displacement of 648cc was a conscious decision on their part so that it doesn’t get mixed up with 700 and 800cc motorcycles from its rivals, and Royal Enfield feels there is a market for bikes between 600-650cc. The new parallel-twin motor develops 47.6PS of power at 7,100rpm while peak torque of 53Nm is delivered at just 4000rpm. The power figure was kept under 50PS to make the new motorcycle compliant for A2 license in UK. The new engine isn’t about outright performance so that riders don’t get intimidated by the bike. The engine has been tuned to offer good low- and mid-range performance with torque playing a vital role, which should make riding in the city easy. It also features a slip-assisted clutch. Having said that, Royal Enfield officials claimed that it has enough grunt to cruise on the highway at speeds around 130kmph in a stress-free manner.

Engine refinement is one aspect where Royal Enfield motorcycles have received lot of criticism in the past. Like on the Himalayan, RE has used a balancer shaft to reduce primary vibrations. To smoothen things out further a stronger single-piece forged crankshaft, the first for a Royal Enfield engine, is used to reduce secondary vibrations. To endow the new engine with a distinctive exhaust note the parallel-twin engine uses a 270-degree firing order to give it the rumble and responsiveness of a v-twin. The “thump” is among the vital characteristics of a Royal Enfield motorcycle and the iconic Indian brand claims that the new engine delivers a rumbling and throaty exhaust note from its twin exhaust mufflers. Featuring a 9.5:1 compression ratio for an easy-going and relaxed nature, the new engine also has the distinction of being the only powerplant in RE’s current portfolio to employ a 6-speed gearbox.

The fuel-injected motor is BS-IV and Euro 4 emission norm compliant, and according to company officials, it will be able to meet the upcoming Euro 5 and BS-VI emission norms with a bit of tuning. The new engine has been designed to give it a retro feel and we must say that the dual-tone finish on the engine fins and chrome on the cases make it look the part.

On paper, Royal Enfield's new twin-cylinder motor does look promising but we won’t pass any judgement until we see the final product and ride it. The new Royal Enfield 650cc twin-cylinder bike will be unveiled at the 2017 EICMA motorcycle show on November 7, while it will be showcased to Indian audiences at the 2017 Royal Enfield Rider Mania. But you will have to wait for some more time before you can buy the new bike as it is still undergoing development and will be launched by March/April next year.