Does the Renegade Commando Classic have what it takes to end the Thunderbird 350 free run in the cruiser segment? Let’s find out 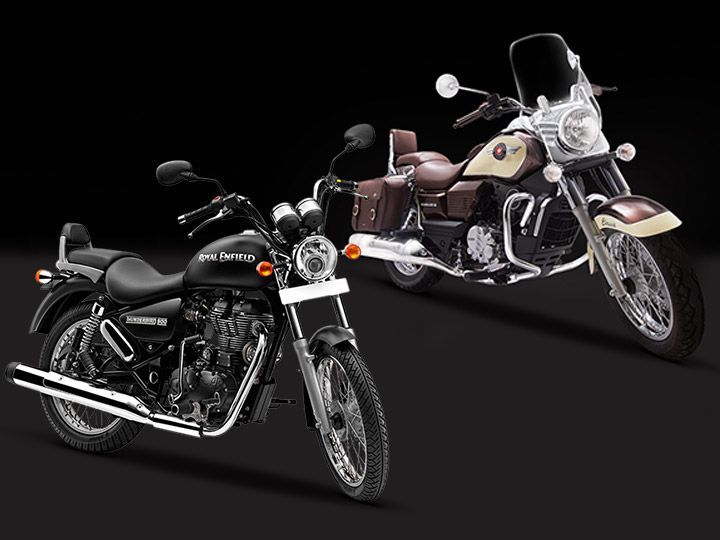 In terms of design, the UM Renegade Commando Classic is clearly inspired by big American cruisers, with its large visor and chrome elements. It also gets additional features like a small zipper on the fuel tank to hold your smartphone or loose cash and also a small saddle bag. The bike features a tank-mounted semi-digital instrument console with an analogue speedometer. There is also a USB port next to it that can be used to charge a phone or a GPS unit while riding.

With its round headlamp, bulbous fuel tank, and split seats, the Royal Enfield Thunderbird 350 makes for a beautiful looking motorcycle. The bike sports a twin-pod instrument console with analogue speedometer and tachometer while the LCD unit displays details like tripmeter, odometer, fuel gauge, service indicator, etc. The cruiser from the Chennai-based manufacturer also features a projector headlamp that provides better luminance than the halogen unit found on the Renegade Commando Classic.

The UM Renegade Commando Classic has a kerb weight rated at 179 kg. In comparison, the Thunderbird is heavier with a kerb weight of around 195 kg at kerb. The lighter kerb weight along with the more powerful motor should put the American back in the race. However, the Thunderbird should make for a more comfortable ride as it produces its peak torque at a much lower rpm. In terms of dimensions, the Commando Classic, at 2257 mm, is longer than the Thunderbird, which stands at 2060mm. While the American cruiser has a fuel tank capacity of 18 litres, the Royal Enfield Thunderbird gets a larger 20-litre tank, which for a cruiser makes better sense.

The UM Renegade Commando Classic comes at a price of Rs 1.89 lakhs (ex-showroom Delhi), while the Royal Enfield Thunderbird will set you back by Rs 1.46 lakh (ex-showroom Delhi). If you’re good at math and logic, you’ll probably figure out that the Renegade Commando is Rs 43,000 more than the Thunderbird, while carrying a smaller engine and much lower torque. But what the UM offers is better visual presence and performance as we found out from our first ride with the new bike.