Comes with a redesigned bodywork with a more elegant-looking fascia 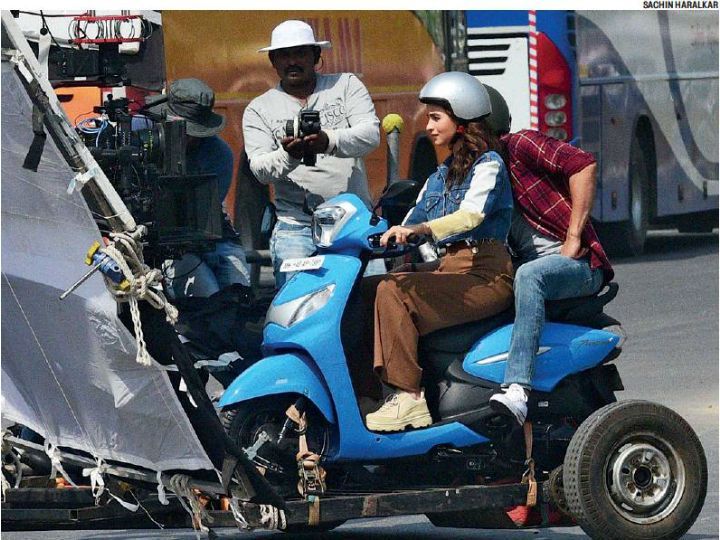 It’s been quite some time since Hero updated its most affordable scooter, the Pleasure. Marketed as a women-centric scooter, the last update the Pleasure received was in 2017 when it got a colour update, BSIV-compliant engine and auto-headlamp on (AHO). Now, a facelifted version has been spotted at what looks like an ad shoot featuring the Hero Pleasure’s brand ambassador Alia Bhatt.

Interestingly, the design language of the new scooter is quite different from the older-gen model. It comes with an elegant-looking headlamp with redesigned apron panels. The headlamp could be LED, and we expect Hero to throw in an analogue-digital combo cluster as well.

The side panels also look much sleeker thanks to the contrasting colours. The grey trims on the bodywork appears to be in matte silver plastic finish. A proper chrome one would’ve looked much better in our opinion.

Expect Hero to retain the same 102cc single-cylinder air-cooled engine mated to a CVT unit. The powerplant makes 7PS at 7000rpm and 8.1Nm at 5000rpm, with the maximum claimed speed rated at 77kmph. That said, we really do hope it gets the bigger 110cc from the Maestro Edge / Duet.

Unfortunately, the scooter retains the trailing link type front suspension, and the rear unit is likely to be the same single shock absorber as the outgoing model. Brakes also are likely to be the same 130mm drums on both ends with Integrated Braking System (IBS). However, the tyre tread pattern seems to be different. It could be from a different tyre manufacturer, while the Pleasure currently sold uses MRF rubber on both ends.

When it comes to pricing, expect the facelifted model to command a premium of around Rs 3,000 over the current model’s price. The Hero Pleasure at present costs Rs 47,100, ex-showroom Delhi, for the alloy wheel variant. Considering the scooter was spotted at a commercial shoot, we wouldn’t be surprised if Hero launches the 2019 Pleasure in April itself. When launched, it would compete against Suzuki Let’s (Rs 49,237), TVS Scooty Pep+ (Rs 42,897) and Honda Activa i (Rs 50,548) in its segment. (All prices ex-showroom, Delhi.)