Like the Tesi H2, the Kawasaki patent reveals a hub-centre steering system. However, it uses a single-sided front swingarm when compared to the Bimota’s double-sided unit 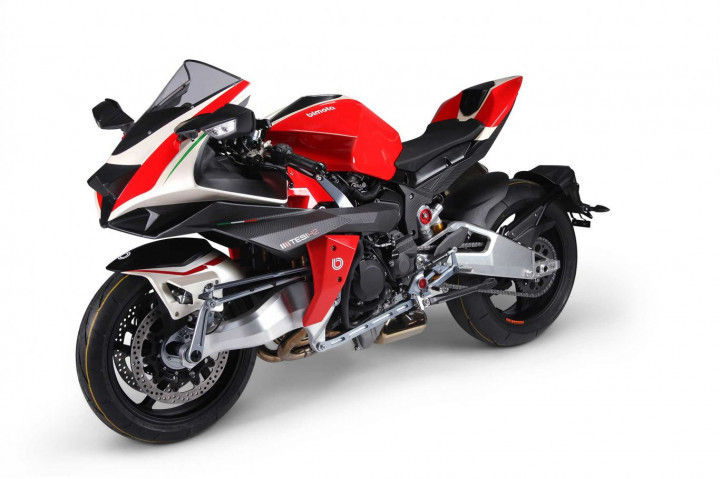 Kawaski seems to be stepping out of its comfort zone and embracing unconventional motorcycle technology. It all probably started with the Ninja H2 that with the help of a supercharger made north of 200PS. Quite recently, Kawasaki filed patents for a Yamaha Nikken style three-wheeled motorcycle and now it has patented a hub-steered swingarm suspension setup. Most enthusiasts among us know the inspiration behind this setup - Bimota.

Kawasaki recently acquired a controlling stake in Bimota and plans to revive the brand. At EICMA, it even showcased the Bimota Tesi H2, equipped with the Kawasaki Ninja H2 supercharged engine coupled with the manufacturer’s trademark hub-steering setup. Like the Bimota Tesi D3, the wheel steers on a pivot inside the oversized front wheel hub. The Kawasaki steering patents though is different from the Bimota steering setup.

A hub-steered setup keeps the steering separate from the suspension setup so it feels more responsive to ride. Even the ride quality is better, with minimised dive under braking. Know more about the advantages of hub steering over conventional steering here.

What makes the Kawasaki patent drawing interesting is its relative simplicity. This could make the tech more accessible. Hence, we won’t be surprised if it makes it to conventional sports bikes in a few year’s time. It is plausible that the new setup could be revealed at this year’s EICMA motor show in November.