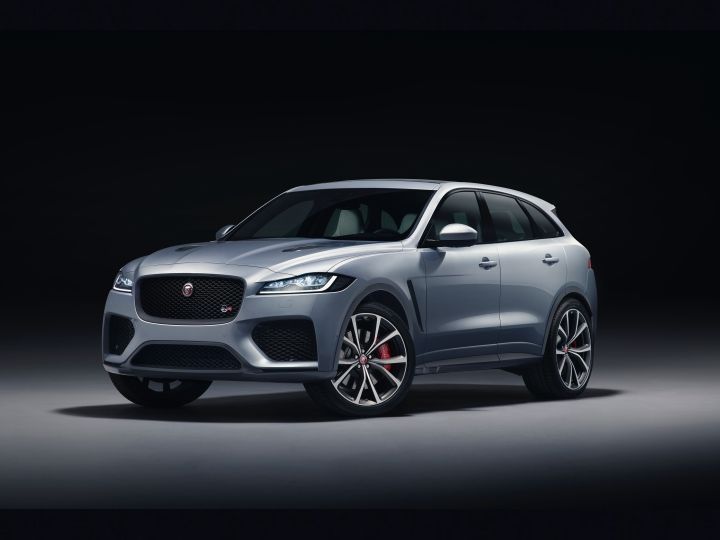 Jaguar unveiled the fastest and most powerful F-Pace yet on March 27, 2018. Called the F-Pace SVR, the sporty SUV engineered by Jaguar Land Rover’s (JLR) Special Vehicle Operations (SVO) features a 5.0-litre supercharged V8 engine that puts out 44 per cent more power than the standard F-Pace.

Yes, the F-Pace SVR makes a total of 550PS and 680Nm of torque, which is enough to catapult it from zero to 100kmph in 4.3 seconds, before hitting an electronically limited top speed of 283kmph. It also gets an enhanced chassis, improved aerodynamics and an electronic active differential (EAD) to help it perform in varying conditions. The rotary gear selector that we’ve come to love over the past few years has been replaced with a Sports Shift Selector, something not entirely different from the conventional gear shift lever you find in most automatic cars.

The SVR aerodynamic package features unique front and rear bumpers along with a rear flip spoiler to enhance cooling, and reduce lift and drag. The bonnet gets vents that suck out hot air from the engine bay too. The quad tailpipes at the rear feature Jaguar’s Active Exhaust System and Variable Valve Exhaust System than ensures this F-Pace sounds exactly like an SVR should. Apart from these (not so minor) details, the exterior looks similar to the standard F-Pace.

To aid stability, the dampers have been uprated, the anti-roll bars fattened while the front and rear spring rates have been increased by 30 and 10 per cent, respectively. The F-Pace SVR comes with two wheel options - lightweight 21-inch alloy wheels or a 22-inch forged wheels with differential width from front to rear to improve handling. The wheel arches have been extended ever so slightly and this gives the F-Pace SVR a more muscular look.

Although the cabin of the regular F-Pace doesn’t feel as premium as the ones found in its German rivals, you have to admit that it is one of few that gives more importance to the driver rather than the passengers. The F-Pace SVR takes it up a notch with updates such as slim performance seats with signature lozenge quilting and embossed SVR logo at the front and a sporty bench at the rear.

The steering wheel gets SVR branding and aluminium paddle shifters. The 12.3-inch HD instrument cluster and Jaguar’s Touch Pro infotainment system with a 10-inch touchscreen along with 4G and WiFi that can connect up to eight devices round out the major features of the F-Pace SVR. JLR’s SVO division will offer the F-Pace SVR with four interior trim options - Red with Jet, Light Oyster with Jet, Siena Tan with Jet and Jet with Light Oyster stitching.

Jaguar has plonked a host of advanced technologies such as Intelligent Driveline Dynamics (IDD), optimised Adaptive Dynamics suspension, Electronic Power Assisted Steering (EPAS) and Dynamic Driving Mode into the F-Pace SVR. It also gets all-wheel-drive, all-surface progress control and adaptive surface response for a spot of off-roading. The F-Pace SVR will go on sale in the UK in the summer of 2018 with a starting price equivalent to Rs 68.7 lakh before options and taxes. Expect the sporty SUV to arrive in India sometime next year to take on the Porsche Macan and the Range Rover Velar.