The custom-built motorcycle was created by Anders Lundgren and Lasse Sundberg as a tribute to Oscar Hedstrom, co-founder of Indian Motorcycles 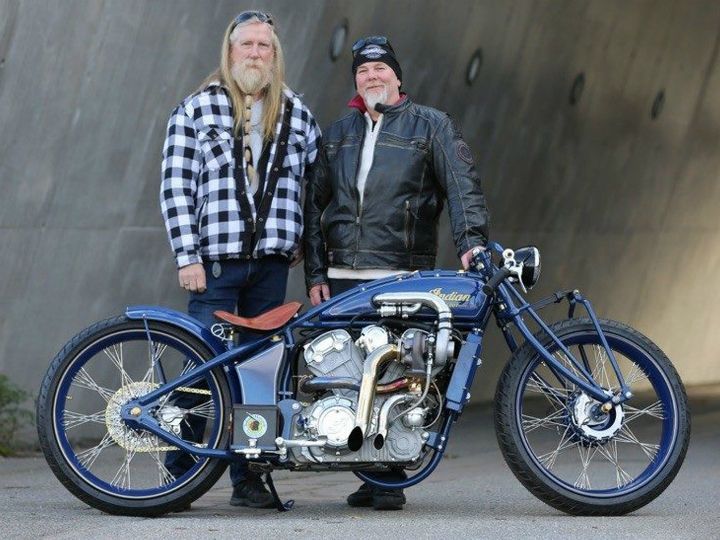 Just taking a brief glimpse at the Indian Super Scout Turbo is enough to bring back nostalgic memories of the broad track racing spectacles of the 1920s. These were the times when motorcycles used to race on wooden planks. Racers used to push their machines at speeds above 100kmph on banked surfaces, riding on tyres meant for bicycles. Understandably, there were spectacular crashes and historic tales of glory, witnessed by throngs of supporters jam packed like sardines.

Sadly, those days are behind us now. Or are they? Well, not according to two Swedish chaps, Anders Lundgren of Stockholm's Fullhouse Garage and Lasse Sundberg of Roth Engineering. The two wrenchers took it upon themselves to pay a serious tribute to Oscar Hedstrom, the Swedish co-founder of Indian Motorcycles. The result is this antique beauty that wonderfully combines the elements of old and new.

“We wanted to build a bike that was related to the Indian history of board track racing and at the same time included the new era of technology that Indian stands for today. The Scout model was a perfect choice and we came up with the name Super Scout to honour the old Scout models that were almost unbeatable on the race tracks,” Anders explained.

Built last year in their workshop in Stockholm, the Indian Super Scout Turbo is claimed to produce between 150 and 200PS of power at the rear wheel, depending on the boost pressure. This is thanks to the liquid-cooled, 60-degree 1133 cc V-twin mill, taken from the modern Indian Scout, and tethered to a water-cooled Garret 25 turbo. Achieving this wasn't an easy task. During the initial steps, Sunderberg had to create a bespoke frame from three different sections, which according to him was the most difficult aspect of the project. That is saying something considering the duo was easily able to fit the turbo, which has its own external wastegate and boost control.

Speaking of it, the downpipes and the headpipes to the turbo and the wastegate are themselves made out of stainless steel and hug the frame tightly, restricting it from interfering with the slim lines of the bike. “We wanted to give the bike some extra boost of power and to also show that we can combine an old-school look with modern technology,” said Lundgren.

And loaded with modern technologies it is. However, not to let it interfere with the motorcycle's vintage look, the duo placed the real tank under the saddle and fitted a dummy one, modelled after the one installed on the 1920 Scout model. The electronic wizardry was then hidden underneath it. Some of the interesting features include a fully programmable ECU and a wireless key fob ignition, that allows the engine tuning to be monitored and adjusted on an iPad via Bluetooth. Other than that, modern LED lighting can be seen throughout the build, including the bar-end turn indicators and a slim LED taillight.

Sunderberg also crafted a one-off rear fender for the build, along with board track-style handlebars with complete internal throttle control. The front suspension consists of a W&W Indian leaf spring fork. For braking, a Beringer inboard system is used at the front and a Harrison billet sprocket brake in the back, both running on K-tech cylinders. The steel wheels here are 60-spoke cross-radial laced structure, wrapped with Pirelli tyres.

Now, with all the technical jargon aside, the important question that remains is: How is it like to ride? Well, according to Anders, "It feels amazing like you have moved back to the 1920s with a rocket between your legs.” We will certainly take his word for it.