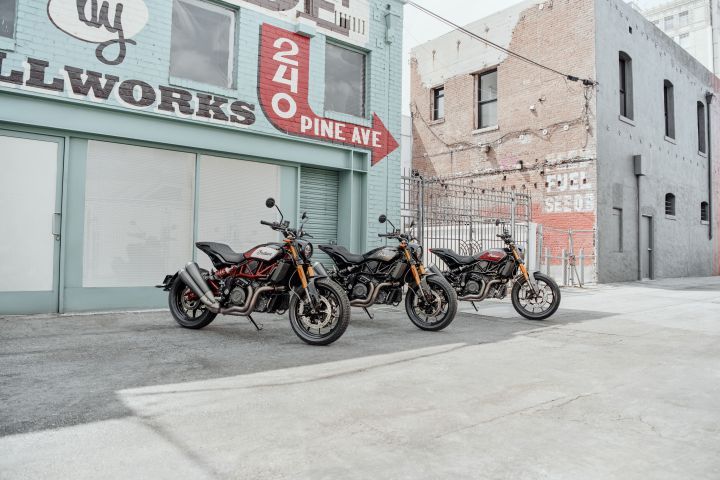 Going sideways (intentionally) is always fun on a motorcycle. Sadly, in India, the options for flat-track motorcycles are limited to a few custom creations. But that was until now. Remember the FTR1200 concept Indian Motorcycle displayed at the 2017 EICMA? Well, now it’s a reality! The company showcased not one, but two production versions of their record-breaking flat track motorcycle - the FTR 1200 and FTR 1200S, at the Intermot exhibition in Cologne, Germany. Here’s why we’re excited -

For starters, both motorcycles get similar styling cues inspired by its racing counterpart, the race-spec FTR1200. This means the round LED headlamps, the exposed frame and the teardrop-shaped fuel tank have been carried over here. However, to make the distinction clear, the base variant comes with a blacked-out theme on the engine, wheels and the twin exhaust, while the 1200S gets a gold-finish on the forks along with a black/grey, grey/red and 'race replica' colour scheme.

In terms of features, the 'S' variant also gets a 4.3-inch touchscreen TFT display instead of the 4-inch analog instrument cluster seen on the standard bike. Then there are three riding modes common to both variants - Sport, Standard and Rain. Traction control, wheelie control and lean-sensitive stability control system are offered as standard.

Powering the motorcycle is the same 1203cc V-Twin motor seen on the Indian Scout. Tuned for more sideways fun, this engine churns out 120PS of power (20PS more than the Scout) and 112.5Nm of torque (14.8Nm more than the Scout), mated to a 6-speed transmission and a slipper clutch.

The FTR1200 is built around a tubular space frame which is suspended upon Sachs USD forks at the front and a gas-charged monoshock unit at the rear on the standard variant. The S variant, on the other hand, gets Sachs suspension on both ends. Braking is taken care of by Brembo 320mm Ffour-piston callipers disc at the front and a two-piston calliper 260mm disc at the rear. While the concept weighed just 193kg, the production model tips the scale at 221kg (dry).

Indian Celebrates 100 Years Of The Scout

Indian Scout And Bobber Lineup To Be Updated For...