2020 Honda City: Here’s A Closer Look At The India-bound Sedan 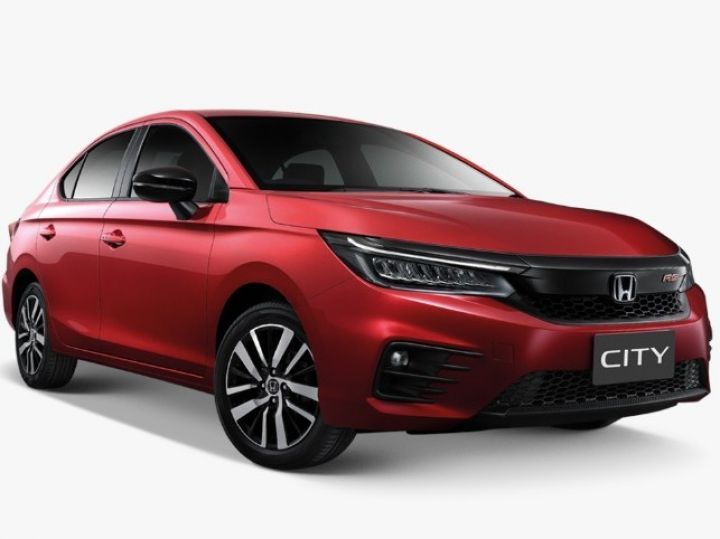 The City has been Honda’s bread and butter model in India through the years. However, the sedan’s sales have been on a slow but frighteningly steady decline this year. 2020 appears positive for the City though since Honda is about to launch the BS6-compliant avatar of the current-generation City. Meanwhile, the company unveiled the fifth-generation Honda City in Thailand on November 25. We can’t wait to see the new City to come to India, though we reckon we’ll have to wait until mid- or late-2020. The Thai-spec model comes in S, V, SV, and RS trims, all with a 122PS VTEC turbo-petrol engine mated to a CVT. It is priced between the Thai Baht equivalent of Rs 13.74 lakh to Rs 17.52 lakh. Even if we can’t drive the all-new City just yet, here’s a closer look at the newest Honda in pictures, including the sporty RS variant:

The new City borrows from the Honda Civic in its fascia. Its honeycomb grille comes with a thick plastic cladding like the Amaze. Undoubtedly, the City trumps the compact sedan in the execution of its design.

The LED headlamp units are all-new in the City. The LED strip for the daytime running lights (DRLs) is placed above the headlamp cluster, right below the Civic-like plastic panel which extrudes from the grille and into the headlamps.

A light bar running the length of the taillight, all the way up to the sides of the car gives the City an even more upmarket feel. Indicators and reversing lights are nestled above the light bar. The Thai-spec City gets an RS variant which retains the same powertrain but comes with leather interiors as standard along with other bits to make it look sportier.

The interior of the new City retains the previous model’s spacious design. A large cubby in the centre console extrudes from the back of the front armrest. The addition of an adjustable centre headrest in the rear seats makes this City safer for the middle occupant. Door-mounted armrests are now longer than before.

This is where the interior ambience changes in the new City. The all-new steering wheel looks just a bit smarter than before and has pistol-grips like the Civic. The previous City’s thick silver line running along the width of the dash has been replaced with an all-new design which cascades downwards. The central air vents are now vertical and are placed on either side of the touchscreen. The added width of the cabin is apparent in the vertical lines and consistent width of the centre console as it flows down to meet the gear selector. A large cubby is placed under the HVAC controls.

The three dials seen in the current car have given way to two for a more conventional design. The numbers are large and easy to read even in the red-on-black cluster on the RS trim. All other information is projected onto a colour screen in the middle of the two dials.

The latest Honda City’s design is conventional in some places and refreshingly different in others. We can’t wait to see this one in India, where it is likely to continue with BS6-compliant versions of the current 1.5-litre petrol and diesel engines. Honda could unveil it in the country early next year before launching it in mid-2020. Until then, we can only ogle at these pictures.