Exclusively available in the UK, the special edition Mustang55 comes with a unique exterior package and high-specification interiors 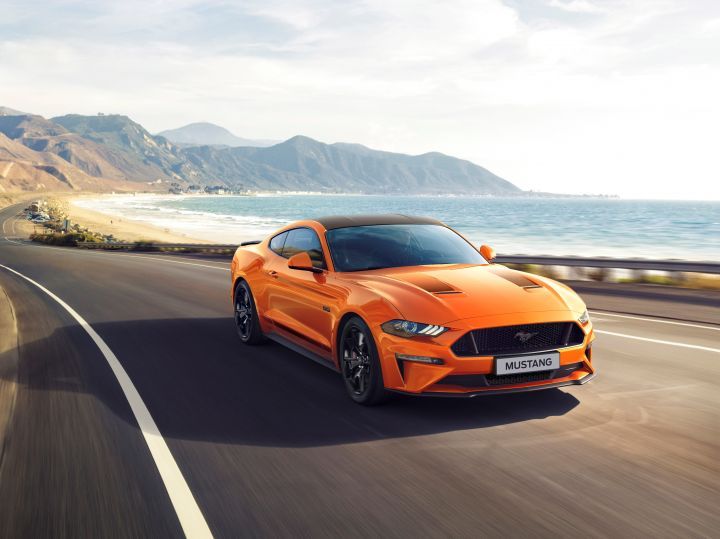 The original pony car, the Ford Mustang, is 55 years old and the folks at blue oval are commemorating this occasion with a special edition ‘stang. Dubbed the Mustang55, changes include a new exterior package and high-specification interiors. Along with this, Ford has also updated the Mustang 2.3 Ecoboost, which borrows various styling from the rorty Shelby variants. Ford also broke the good news that it will continue to produce the Mustang Bullitt edition for the second year, thanks to strong demand!

Being 55 years old now, the Mustang might be an archaic name plaque, but the sixth-generation Mustang is anything but old-school. The Coyote 5.0-litre V8 that sit up front has some impressive tech up its sleeve and makes 450PS and 570Nm of torque. The ‘Voodoo’, ‘Aluminator’ and ‘Predator’( now, that’s how you name them) are various sinister versions of the same engine that make use of a flat-plane crank.

The Mustang55 is available in the fastback and convertible body styles and features a new hood, side stripes,and an optional rear spoiler along with an high-specification interior. It also gets some subtle additions like the black roof for fastback models, black pony badge and a new 5.0-litre badge with the decimal point in Colorado Red. The special edition also comes equipped with a six-speed manual gearbox featuring a unique moulded gear-shift knob along with the 10-speed automatic gearbox. Heated and cooled front seats, SYNC 3 connectivity system, premium 12-speaker B&O sound system, and onboard modem for enhanced connectivity are some of the other inclusions.

The Ford Mustang 2.3-litre EcoBoost, meanwhile gets minor styling upgrades from the Shelby models. It features a Magnetic Grey California grille incorporating the classic tri-bar pony badge from the ‘stangs of yore. Ford’s innovative active valve performance exhaust has also trickled its way into the Ecoboost. It comes with the fancy Good Neighbour Mode that can be programmed to automatically limit the exhaust’s noise output at pre-programmed times of the day to avoid disturbing neighbours. No cookies for guessing who’s going to be happy on hearing this.

Steve McQueen aficionados and movie buffs rejoice as Ford has also announced that it will continue to produce the Mustang Bullitt edition for the second year due to huge demand. It flaunts the same Dark Highland Green from the original pony from the 1986 thriller. Some special touches include 19-inch Torq Thrust-style wheels, red Brembo brake callipers, faux Bullitt fuel-filler cap, a bespoke black front grille, green stitching for the standard seats, optional Recaro Sports seats, and a white cue ball gear shift knob.

Four new colours have also been added to the lineup --Twister Orange, Grabber Lime, Iconic Silver and Lucid Red. The Mustang 55 and revised 2.3-litre Mustang will be available to order from August with a slight premium for the above said updates. The Mustang in India with the 5.0-litre V8 retails for Rs 74.63 lakh (ex-showroom, Delhi).