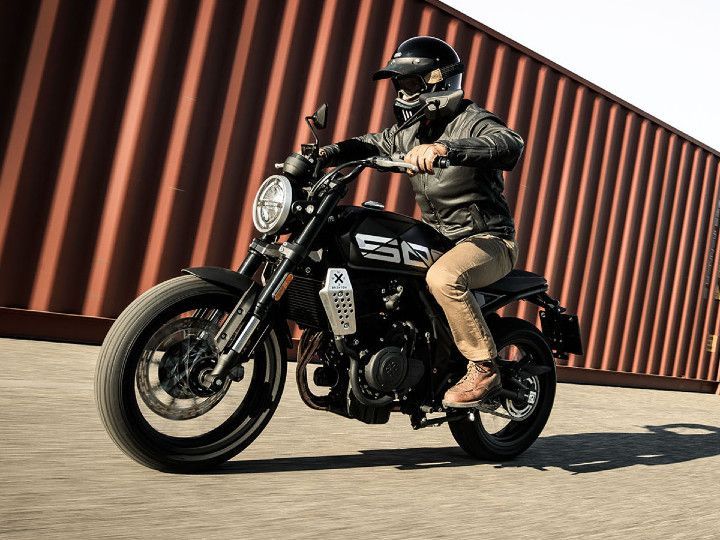 You may not have heard of Brixton Motorcycles, but we won’t hold that against you. Started in 2015, this retro-inspired subsidiary of Austrian bikemaker KCS had so far been focussing on single-cylinder machines, sold mostly in China and the European markets.

Thus far, the brand’s portfolio included the Cromwell (naked), Sunray (cafe racer), Felsberg (scrambler) and Rayburn (bobber), all of which are offered with 125cc and 250cc engines. Now, though, Brixton has turned over a new leaf and ventured into the mid-capacity segment.

So what do we have to look out for? Read on to find out!

A summary glance of the Crossfire will tell you Brixton was heavily inspired by the Husqvarna Svartpilen and Vitpilen 401.

In fact, the headlight and single-pod instrument cluster look similar in design (with hints of the Triumph Trident thrown in), as does the flatness across the top of the tank and saddle, the swingarm-mounted number plate holder, and the muted matte paint job. Even the exhaust (save for the inclusion of a small heat shield) looks almost identical to that on the Husky.

Just as the Husqvarna Vitpilen is positioned as a cafe racer and the Svartpilen as a scrambler, similarly, the Crossfire 500 is the road-biased of the two. The 500X is more suited for the trails courtesy the grippier Pirelli MT60 tyres (as opposed to the Angel STs on the 500), wider bars, patterned seat, and licence plate holder.

The Crossfire packs Brixton’s first-ever twin-cylinder engine which was developed over a claimed two years by a team of 20 engineers. The 486cc liquid-cooled parallel-twin develops 47.5PS at 8500rpm and 43Nm at 6700rpm, mated to a six-speed gearbox. Its performance figures position it squarely within Europe’s A2 licence requirements, so the spec sheet similarity to Honda’s lineup of 500cc twins (CB500R, CBR500 and CB500X) wasn’t a coincidence.

Retro-modern Through and Through

Despite not belonging to an established brand, the Crossfire doesn’t feel built to a price. It boasts LED lighting all around, a slip-and-assist clutch, J.Juan braking system with a radially mounted caliper biting onto a 320mm disc up front and 240mm disc at the rear, with Bosch 9.1 switchable ABS to boot.

That said, there are a few bits and bobs which might once again seem familiar, such as the key which gets the ‘pen-knife’ treatment seen on Benelli bikes.

We hate to be the bearers of bad news, but if the Brixton Crossfire 500X were to be launched here, it would find few takers. First of all, the brand itself would register with only those chosen few who followed the EICMA 2019 (where it was unveiled).

Next, since it is built overseas, it will command an asking price far higher than its rivals such as the Benelli Leoncino 500 and KTM 390 Duke, while delivering much the same performance.

Lastly, the Indian market has only recently warmed up to the retro-modern nous, with the Husqvarna 250 duo still not quite setting the sales charts on fire. So new entrants in this space would have to wait a while to gain a foothold.