And don’t worry, they are not all Harleys 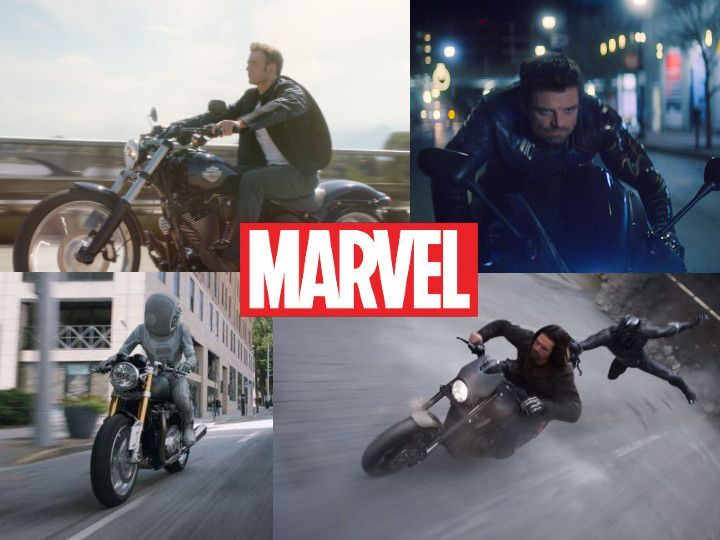 The Marvel Cinematic Universe has been one of the most iconic pop culture phenomena to take place in this millennium. This cinematic experience spans 23 movies and two television shows, three if you count Agents of Shield. Coming back to autos, Marvel movies have had their fair share of sequences. So, here’s us listing down the top five bikes that graced the MCU, and be warned, there are spoilers ahead.

Harley-Davidson Softail Slim - Captain America in The Avengers
After putting an end to Loki’s scheme of taking over the planet, Earth’s mightiest heroes depart in different directions. While Iron Man/Tony Stark drives off in a cool Acura, the movie ends with Captain America/Steve Rogers riding off into the sunset, with wind in his blonde hair, on a Harley-Davidson Softail Slim. Marvel has had a long standing tradition of putting Cap on Harleys in its comics and it was bound to do the same in the movies.

Harley-Davidson Street Rod - Winter Soldier in Captain America: Civil War
The Winter Soldier/James Buchanan ‘Bucky’ Barnes was wrongfully framed for the murder of King T’chaka of Wakanda after the blast at the Vienna International Centre. Bucky tries to escape the special forces that are trying to capture him on the Street Rod, only to be apprehended by the Black Panther/Prince T’challa. It was the first time a Marvel villain/anti-hero was seen riding a Harley in these movies, quite a refresher from the bikes being restricted to just Cap. But just like most Harleys in Marvel movies, this one too was eventually crashed.

Harley-Davidson LiveWire - Black Widow in Avengers: Age of Ultron
Probably one of the coolest moments in the MCU: the Black Widow drops down from the Quinjet on what was then still the prototype Harley-Davidson Project LiveWire motorcycle. Widow chased down Ultron’s truck and helped Cap recover his shield, with the traditional whooshing sound of an electric motor prepping us for how the future generation Harleys were going to sound.

Triumph Thruxton R - Sonny Burch’s goons and Ghost in Antman and The Wasp
Sonny Burch was quite a peculiar character in the Antman and The Wasp. He was a constant thorn in the protagonists’ side as he tried to gain access to the quantum technology that Hank Pym had developed. In a chase sequence to steal Pym’s shrunk building, Burch’s goons chase down Pym’s daughter, The Wasp/Hope van Dyne, and Scott Lang/Antman on Triumph Thruxton Rs. This isn’t the first time Marvel has used a Triumph motorcycle in its movie. The first Avengers movie has Bruce Banner ride up to the carnage in New York City on a 1970 Triumph T 100 R Daytona 500 before turning into the Hulk. While that was a cool scene, the motorcycle had more of a blink and you’ll miss it moment there. Whereas while watching multiple Thruxton Rs crash and burn, I felt severe heartache as it is one of my personal favourites.

Honda CBR600RR - Winter Soldier in Falcon And The Winter Soldier
Okay, at the moment of publishing this article, this particular motorcycle has still not appeared in the MCU. But, the season finale of Marvel’s latest TV show, the FTWS, shows Bucky being chased down in Madripoor on the 600cc supersport. Ultimately, like all motorcycles in the MCU, the Honda Ceeber also ends up crashing, this time into a barrier as Bucky is taking down the Flag Smashers or even the Power Broker’s guards. This moment was teased in the trailer and several images from the shoot have emerged online as well.

Honorary mention: Ducati Panigale 1299 S - Francis/Ajax and goons in Deadpool
Technically, the Deadpool movie isn’t part of the MCU but rather, the mutant world. But we know the Merc with the Mouth is going to be joining the frenzy soon, so it made sense to at least mention him in this company. Deadpool/Wade Wilson is on the hunt to find Ajax/Francis. Why? 'Cause in the process of making him immortal, the mutation process transformed his looks into a grotesque monster. While Wade escaped before Francis could sell him off to become some evil group’s puppet, he again sought to find Francis and force him to fix his face.

And what better way to intercept him than in a motorcade with black SUVs and Ducati Panigales. Even though Deadpool is a skilled marksman, the Panigale 1299 S was so quick that Francis was able to escape the first time round. But ultimately, Wade’s katana (no pun here) put a stop in Francis’ tracks.