Ducati May Have A New Design Direction For Its Future Scramblers 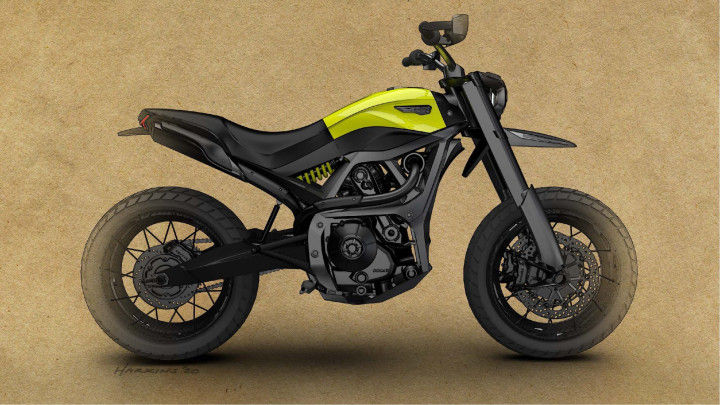 Design has played a pivotal role through generations to help well-known brands set itself apart from commoners. Good design gives customers what they’d like to see, while great design solves problems. Institutions like the  ArtCenter College of Design in Pasadena, California is the perfect platform for budding designers who’d like to work in the transportation design sector. It recently joined hands with Ducati to propose a competition for its students where they explored future design direction for the Scrambler range.

Of all the projects that were submitted, Peter Harkins, one of the participants in the competition, came out with flying colours with his interpretation of what the future Scrambler could look like. The most obvious choice was an electric scrambler, but thinking simple and out of the box is what won him first place.

His vision of a future Ducati Scrambler revolves around the idea of a dirt-bike-type scrambler that uses a simple single-cylinder (rather than a V-twin) held together by a cradle frame. He even played around with the rear shock positioning, which in the final concept is neatly tucked away under the bodywork and connects to the double-sided swingarm using a strut. This could give the option for ride height adjustability while protecting the monoshock from dirt and debris.

What also set his design apart from the rest is his understanding of the bike’s proportions and the Scrambler brand ethos. In doing so, Harkins could retain the bike’s signature 'X' shaped headlight design, while taking it forward using his own unique style. Dirt bike design cues also come in the form of a beak-shaped front fender that adds more character to the Scrambler range. The front forks, like most modern dirt bikes, have been concealed using fork covers which should keep the shocks away from dust and grime. Taking this future are a pair of handguards that should protect the brake and clutch levers in case of a fall.

And while it stays true to the overall form of the Scrambler, the seat and fuel tank design look sleeker and more in tune with the modern era. The concept also showcases a new exhaust positioning. The exhaust pipe runs neatly along the lines of the chassis to form a slender high-mounted end-can and almost camouflages itself with the seat.

According to Andrea Ferraresi, Ducati Design Center Director, "The reinterpretation that Harkins proposed takes its inspiration from the values â€‹â€‹of the brand and maintains the typical stylistic canons of the Scrambler Ducati, such as lightness, simplicity of lines and the headlamp characterized by the unmistakable X, now recognized as the signature of the bike.”

As the winner, Peter Harkins will now train as an intern alongside some of the best designers at the Ducati Design Center in Bologna, Italy. We sure hope the Italian manufacturer takes this direction for future Scrambler concepts and are waiting on one leg to hopefully ride one in the future.