The new line of electric mobility, in collaboration with MT Distribution, will arrive this year 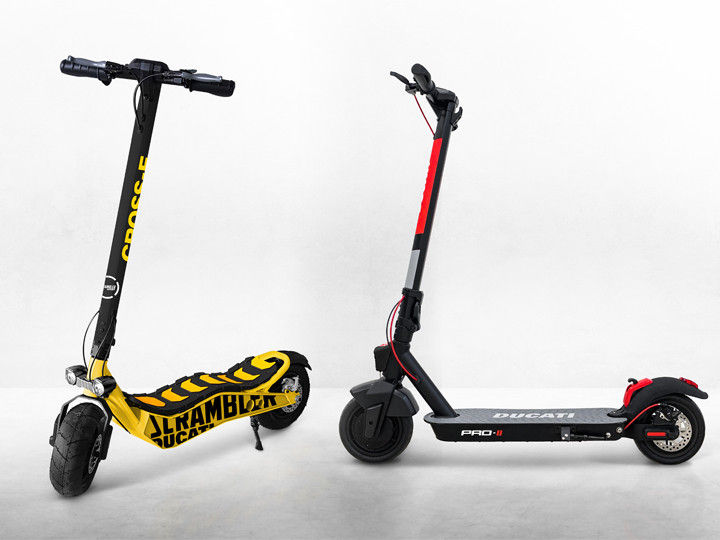 Ducati will soon be launching its new line of folding electric bikes and scooters for urban mobility, in collaboration with MT Distribution. A total of seven new products will be launched through the course of 2020. This includes four electric scooters and three folding electric bikes with Ducati, Ducati Corse and Ducati Scrambler branding. The new product portfolio has been developed after a thorough study of urban travel and sustainable transport.

The entire range has been developed in collaboration with the Ducati Design Centre and Italdesign. The first two scooters to be introduced in the international market on June 20 and July 6, 2020, will be called Cross-E and Pro II respectively.

These scooters will be powered by a 250W to 500W electric motors. The first scooter known as the Cross-E is branded under the Ducati Scrambler range, and rightly so since it features chunky anti-puncture tubeless tyres (size 110/50-6.5”). Essentially, you could take the scooter through stretches of dirt or trails and come out unscathed. The scooter is powered by a 500W continuous brushless motor that ensures you have enough grunt while belting it out through inclines and rough terrains.

As for its range, you could expect between 30km and 35km per (claimed) charge through its 375Wh battery which should be enough for daily runabouts. But you’d have to maintain an average speed of 15 kmph to extract these numbers. On the bright side, Ducati says the Cross-E is quite practical at night too thanks to its powerful twin LED headlights. You even get a 3.5-inch LCD instrument console which offers a bunch of information including three riding modes.

In comparison, the Ducati Pro II makes use of a 350W continuous brushless motor and a 280Wh battery pack. The configuration delivers a claimed range of about 25-30km/charge which should be enough for you to ride around the city. The Pro II also features 10” puncture-proof tubeless tyres, a rear suspension, a double brake (electric front and rear disc), and a large 3.5-inch LCD display.

And if you're particularly interested in scooters, you could opt for Ducati's folding e-bikes, which will be launched in the global markets in the coming weeks. Ducati says these e-bikes will carry Ducati DNA and come equipped with a seat post integrated LED tail light, light-sensitive headlights, and a battery pack neatly tucked away into the frame.

A couple of these models will soon be available at Ducati dealers. Alternatively, you could buy them via Ducati’s online store.