Some spy shots of the Cross have also surfaced, giving us a clear picture of what it would look like

Japanese carmaker Datsun has dropped a teaser of the upcoming Datsun Cross on its Indonesian YouTube channel. The Datsun Cross is slated to make its global debut in Indonesia on January 18, 2018. In the 15 seconds-long clip, the manufacturer hasn’t shown much of the crossover, but has given us a good look at the Cross’ front fascia. 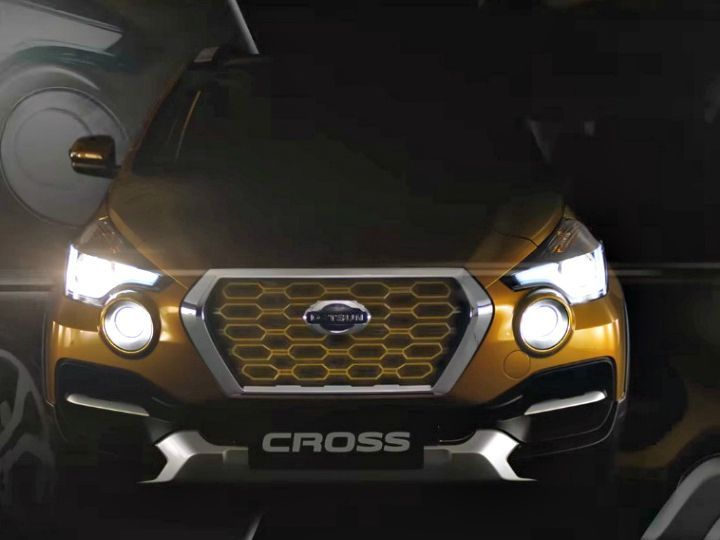 From what we can see in the teaser, the Cross seems to retain the front fascia of the concept. The hexagonal grill up front is flanked by split wraparound headlamps. The front bumper looks muscular with large air dams and a silver coloured faux skid plate. All in all, the front looks quite bold and lends it an SUV-like look.

Along with the teaser, some spy shots of the upcoming crossover have also surfaced. These images give us a better look at the sides and the rear of the Cross. Going by the pictures, the side profile of the new crossover looks quite similar to the Go+, except for the all-round body cladding. Coming to the rear, the story remains the same as the tailgate, bumper and tail lamps seem to be borrowed from the GO+ as well.

Datsun recently updated the GO and the GO+ in the Indonesian market with features such as 15-inch alloys and electrically adjustable rear view mirrors. We expect the upcoming crossover to feature the same.
On the inside, the Cross is likely to be offered with more premium interiors than the GO siblings as this will be Datsun’s most premium product on offer.

Under the bonnet, the Cross is expected to carry forward the same 1.2-litre petrol engine (68PS/104Nm) found on the Go and Go+. It should come mated to a 5-speed manual transmission. Along with the petrol, Datsun may also offer a diesel engine with the Cross. If that happens, it is expected to be a 1.5-litre (64PS/160Nm) engine borrowed from the Nissan Micra as Datsun has no diesel engine on offer currently.

After launching in Indonesia, we expect the Cross to arrive at our shores later this year. When launched, it is expected to be priced around Rs 5 lakh and will go up against cars such as the Mahindra KUV100 NXT and the Maruti Suzuki Ignis. That said, there is no official word from the manufacturer about its India launch yet.