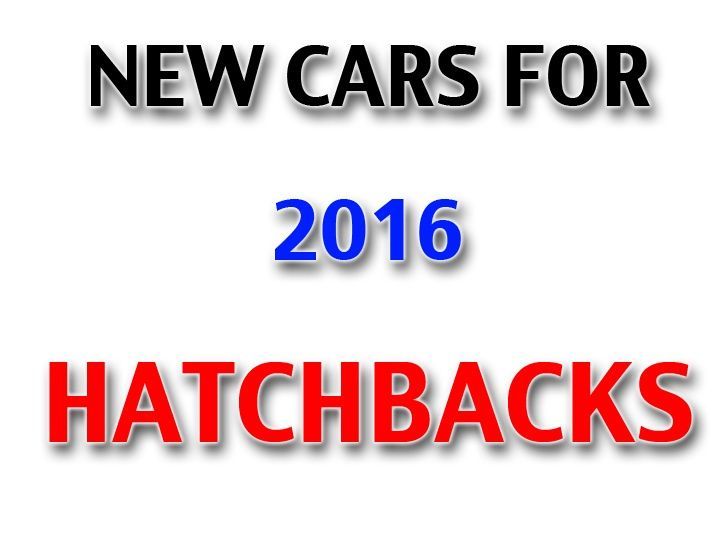 The hatchback is the staple diet of the Indian automotive sector. With new hatchbacks coming into the market every year and with customers expecting more tech and more gadgets from the cheapest to the most expensive hatchbacks, there will be quite a few cars to look forward to. From facelifted versions of popular cars like the Alto 800 to the new Tata Zica to hot hatchbacks like the Volkswagen Polo GTI, there is something for everyone.

The Tata Zica hatchback is possibly the most important car from Tata Motors in a long time and will also be the most important hatchback that will be launched in 2016. With a sharp new exterior and new interior that exudes quality combined with class leading space, the Zica is certainly a car to look forward to. The Zica also gets brand new three cylinder petrol and diesel engines. The petrol is a 1.2-litre motor that makes 85PS of peak power and 114Nm of torque while the diesel is a 1.0-litre engine that makes 70PS of peak power and 140Nm of torque. The new Tata Zica will be priced from Rs 3.5-6 lakh and will go right up against the likes of the Hyundai Grand i10 and the Maruti Suzuki Celerio amongst others. Expect the Zica to do well in the Indian market.

One of the most awaited cars next year, the Volkswagen Polo GTI will certainly take the hot hatchback crown away from the Fiat Punto Abarth. The Polo GTI will be powered by a 1.8-litre TSI petrol engine producing 180PS of power with 250Nm of torque mated to a 7-speed DSG gearbox with paddle shifters. The Polo GTI is equipped with an upgraded brake system for stopping power. The front wheels will have ventilated brake discs with a diameter of 310 mm, and at the back 230 mm discs will be used. Along with a powerful engine, the Polo GTI will be launched with a host of exterior and interior upgrades. Starting off with the exterior, the Polo GTI will receive a new front bumper with an aggressive look. The standard horizontal slit grille is replaced with a red strip radiator grille with GTI badging on the honeycomb structured design. The Polo GTI will also get an upgraded interior with sports seats, a sports steering wheel and the read and black theme. Expect the Polo GTI to cost close to Rs 12-13 lakh when it finally makes its way to the Indian audiences.

The Go-Cross is based on the Go+ MPV but looks a lot more premium than current Datsun offerings. Of course, styling will most likely be toned down a fair bit when the crossover comes into production but the cross styling might just be the push it needs to make it appeal to Indian audiences. Although no details have been released as such, going by the pictures, and the ‘Cross’ tag, expect higher ground clearance, and protection under the front and rear bumpers. Expect the GoCross to get both petrol and diesel engines (for the first time) and come at a mouth watering price that can really help push the Datsun brand in India. The new GoCross will be priced at Rs 4-5 lakh when it makes its way to India.

The Alto 800 has been with us for a while now and is due for a mild facelift. We expect new bumpers, new head lamps and tail lamps along with a mild upgrade to the interior. We also expect Maruti to offer safety benefits like ABS and air bags as optional extras on all variants. We do not expect the Alto 800 to get any mechanical upgrades of any sort both in terms of the engine or the suspension setup. Expect the Maruti Suzuki 800 Alto to be priced between Rs 3-4.5 lakh and do as well as it currently does in terms of overall sales figures.

The Honda Brio has been with us for about three years now and is first in line to get a facelift. Expect sportier styling to make an appearance on the new Brio with new bumpers both in the front and back along with new headlamps and tail lamps. Also expect an updated interior with the AVN system that you get on the Mobilio and a new interior fabric. Also expect new alloy wheels to grace the Brio. Mechanically, it is highly unlikely that the Brio will get any changes or the diesel engine that it sorely deserves.

With the current generation car having been with us for a few years now, the Eon is due a facelift anytime soon. Expect a new set of bumpers, new headlamps and tail lamps and an update in the interior department to make it more current. Also expect alloy wheels in the top of the line version and new colors to add to the Eon’s portfolio. Expect pricing to be from Rs 3-4 lakhs. The Eon facelift will go up against the likes of the Tata Nano and the Maruti Alto 800.