TVS celebrates 3 million Apache sales with a 1000km ride in Nepal, spread across 4 days and 3 locations 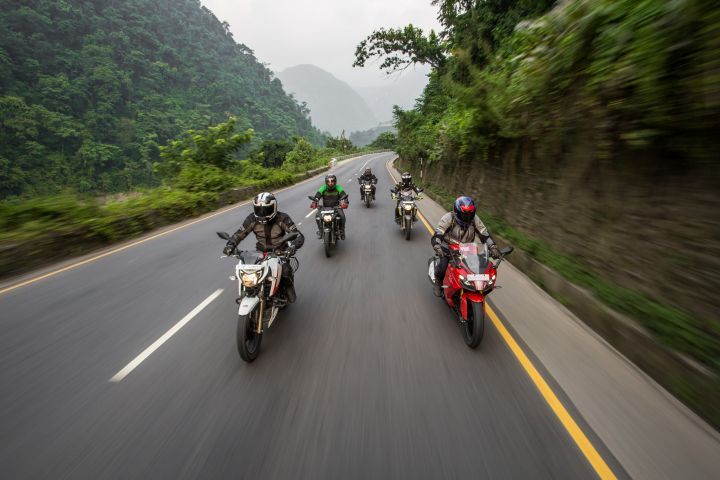 Recently, TVS flew us to Nepal to be a part of their first ever international ride to celebrate the success of the Apache series, which has clocked 3 million units in sales. The ride was spread across 4 days and 1000km, starting from Kathmandu, going through Pokhara, then Chitwan, and finally ending up back in Kathmandu. Not a lot of distance, but nonetheless a memorable experience shared with like-minded comrades accompanying us on the journey.

The ride itself gave us a chance to sample the Apache range yet again, but in a foreign land this time round. And while our journey through Nepal was interesting, the journey of the Apache brand through the years has been just as, if not more, interesting.

Journey of the brand name Apache

It was in 2005 that the Apache brand was introduced, to take on the Bajaj Pulsar and Hero Honda CBZ. But while the 150cc Apache was big on looks, it really couldn’t match its more powerful rivals on the performance front. TVS were quick on their feet though, and soon after, made a strong comeback with the larger-capacity RTR 160 and RTR 180, which were proper track-derived machines with performance and dynamics to match.

This major shift in brand approach was mainly due to the involvement of the TVS Racing Team, which has been working closely with TVS R&D ever since TVS gave birth to the RTR range. Standing tall today, the TVS Racing Team has gained 35 years of knowledge and experience from the crucible of motorsport. This has helped them to fine tune the 2-valved RTR 160 and RTR 180 models further. The RTR 180 was also the first ever Indian motorcycle to receive ABS.

The journey had just started. In 2016, TVS introduced us to the bigger RTR 200 4V, which, as the name suggests, was powered by a brand-new 4 valve motor. The addition of two more valves has allowed the Apache RTR 200 to breathe better and rev higher as well. And that made it a much more refined, committed and powerful Apache than ever before. The RTR 200 4V gained a lot of recognition from both critics as well as customers. History repeated itself when the RTR 160 4V was launched, which proved to be the most sought after 160cc after the Pulsar NS 160, which had impressed us a lot during the shootout against the Honda Hornet 160R.

This paradigm shift from 2-valve motors to 4-valve motors, improved styling and features, and most importantly, the use of better components, has certainly made a statement for TVS’ dedication towards the future and the path they have chosen to take.

Staying true to its line of interest of offering performance packed-products, TVS also launched the RTR 200 Race Edition 2.0, which got dual-channel ABS and slipper clutch. To date, it is still the only bike in its segment to be offered with such features.

TVS entered the big leagues with the Apache RR 310, their first fully faired bike. The bike shares its chassis, engine and other mechanical components with the BMW G 310 R; however, the design has been completely worked upon by TVS Racing. TVS has also re-engineered the engine heat management system, a patent for which is still pending. So while the RR 310 is an amalgamation of TVS and BMW Motorrad’s R&D forces, it plays an important role in the TVS Apache lineup.

During the ride, the earlier generation RTR’s, i.e. the RTR 160 and 180 2V, did feel a bit dated with the amount of vibrations kicking in and their petite dimensions as well. However, the bikes managed to hold their own in the face of the more mature RTR 1604V and 200 4V, and felt a lot more nimble and reactive to the slightest input made by the rider.

That said, the new breed of Apaches impressed us immensely with their sprightly low and mid range. The RTR 160 4V did require a bit more effort to get moving though. Otherwise, no issues whatsoever from any of the bikes, despite being ridden at the max for most of the journey. We even put them across some off-road stretches and the bikes didn’t seem to break a sweat.

The motorcycle that impressed us the most was the RTR 200 4V. Its suspension setup proved to be ideal for bad and off-road conditions. Plus, its power on tap always had us engaged throughout the ride.

All said and done, a special mention goes to the RR 310 as its ergonomics and suspension setup proved to be impressive for the long haul we were set out for. That said, the bit that really upset our ride time on the RR 310 were the tyres, which lost traction under hard braking despite the ABS kicking in. Then there were the vibrations, which were so harsh that we were left with numb fingers for most of our time on the bike.

Keeping aside the experience of the bikes, the overall journey was also quite fun-packed and challenging at the same time. We not only dealt with multiple road/ weather conditions but also met some interesting personalities. We also got a chance to engage with the young crowd of Nepal and got a taste of our neighbouring country’s passion towards motorcycling and music.

Overall, it felt great to be a part of such a milestone celebration and we look forward to more captivating offerings from the Apache brand.