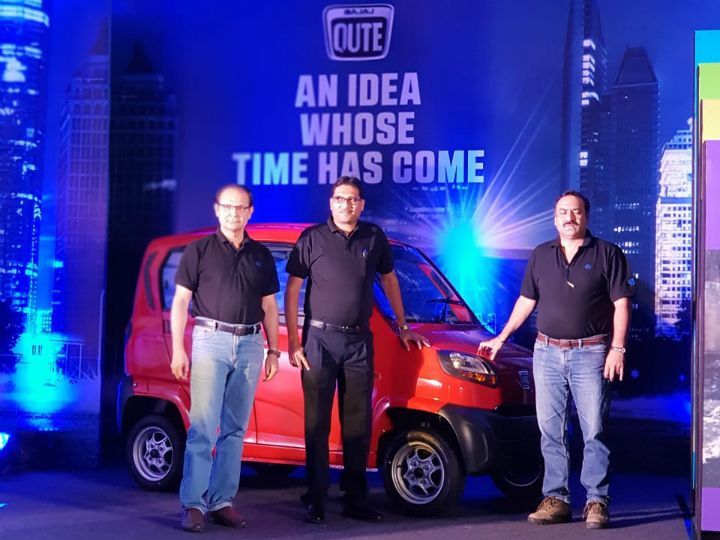 Bajaj has launched the Qute in Maharashtra at Rs 2.78 lakh for the CNG variant and Rs 2.48 lakh (ex-showroom Maharashtra) for the petrol variant. Maharashtra is the sixth state to get the Qute after Kerala, Gujarat, Odisha, Uttar Pradesh and Rajasthan. It was in 2018 that the Qute got the official approval for production from the Indian government. It is a purpose-built vehicle for intra-city travel.

The Bajaj Qute is powered by a 216.6cc, four-stroke, twin spark-ignition, single-cylinder, liquid-cooled engine that develops 13.1PS of power and 18.9Nm of torque. The CNG variant is good for 11PS of power and 16.1Nm of torque. The engine comes mated to a 5-speed manual transmission. Bajaj is claiming an efficiency figure of 35 kmpl for the petrol variant and 43km/kg for the CNG variant. According to the press release, the petrol variant is only available for personal use, while  the CNG variant is available only for commercial purposes. However, upon clarifying with Bajaj officials they stated that both variants are available for both personal and commercial purposes.

As for the dimensions, the Qute is 2,752mm long, 1,312mm wide and sits 1,652 mm high. Wheelbase of the quadricycle stands at 1,925mm. It can accommodate four occupants, including the driver. The kerb weight is rated at 451kg and the Qute can reach maximum speeds of up to 70kmph. Some of the features include USB charging port, music player, lockable storage compartments, adjustable driver seat, and 60:40 split rear bench. Bajaj claims that the Qute’s maintenance will be low and that it is specifically designed for city use with a turning radius of 3.5m.

Auto drivers are the main target audience for the Qute according to Bajaj. The Qute excels the conventional three-wheeled auto in every aspect, especially when it comes to safety, thanks to a high strength monocoque body and impact-resistant plastic closures along with lockable doors, hard rooftop and front and rear seatbelts. The Indian government classified the Qute as a quadricycle in 2013 and ARAI approved it recently as it complies with Indian quadricycle norms. To know more about this quadricycle, read our first drive review here.