What To Expect from The Next-gen Baby Duke?

Will we finally see a TFT instrument console on the new 125 Duke? 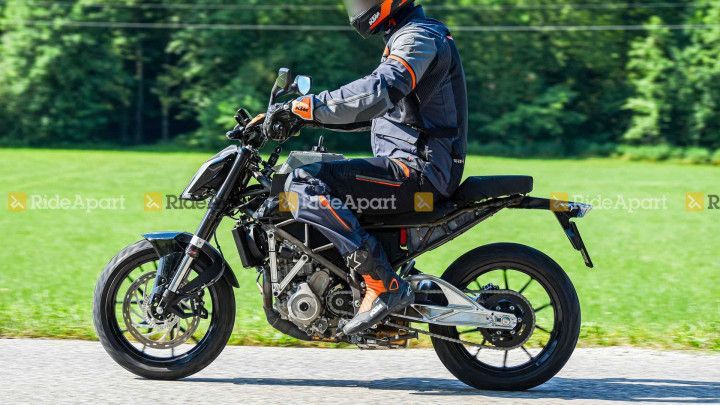 The KTM 125 Duke made its India debut in 2018, and surprisingly, became the brand’s best-seller in the country within just four months. Last year, the Austrian manufacturer even introduced the second generation of the bike (although two years late). Now, a new generation of the baby Duke is already being tested in Europe, and here’s what the 2022 KTM 125 Duke could offer:

Fresh Styling
The current generation model’s design is over four years old, and is likely to be replaced by new, sleeker body panels, like we have seen on the 2022 KTM 250 Duke's protoype. Although it sported the current-gen’s alloy wheels, rear-view mirrors, and front fenders, KTM could replace them with the ones seen on the 250cc sibling. That said, the India-spec model could borrow some elements from the current model, so keep a check on the price.

Will it get the LED headlight unit like the international-spec model? Though we would love to see that, KTM might just retain the existing halogen unit.

The changes on the 125 Duke aren’t just skin-deep. Along with the new design, the Austrian marque has made changes to the chassis as well. Apart from the new engine mounts, the new Duke will get a new bolt-on subframe, which appears to be longer than that of the current model. In all probability, this has been done to accommodate the new side-mounted setup for the monoshock.

Another change comes in the form of the new swingarm, which could not just help shed some flab but also affect the bike’s handling.

The current-gen model’s engine churns 14.95PS and 12Nm, which is unlikely to change. However, if KTM manages to reduce the bike’s weight, performance figures could slightly go up.

The bike that’s available overseas comes with a TFT instrument console, which KTM should carry forward (if not give it any major update). The India-spec model, however, could come with an LCD unit similar to the one on the 250 Adventure. This means the bike would still lack Bluetooth connectivity.

The test mule seemed to be in the initial stages of testing. We expect KTM to introduce the 2022 125 Duke by early next year, followed by the Indian debut in mid-2022. The current model is priced at Rs 1.62 lakh, and the new model could demand a sizeable premium.