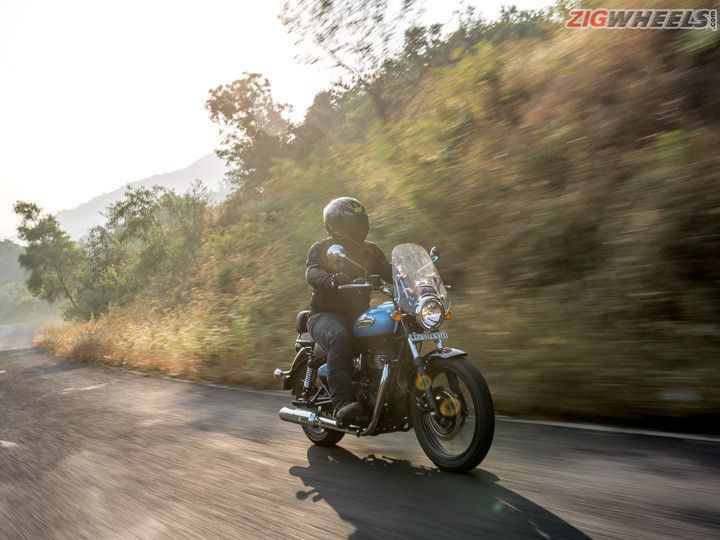 Rules are meant to be broken and in my case it was with the Royal Enfield Meteor 350. I had stopped using long term bikes for quite a while as my own bike was getting neglected. However, that rule was broken when I was in Pune to shoot the Meteor 350 vs Classic 350 comparison. If you haven’t seen the video yet, do check it out here.

It’s no secret that the Meteor 350 was the among the most highly anticipated new bike launches in 2020. The Meteor 350 was a turning point for brand RE and also a new chapter in its illustrious history was about to be added. It boasted a new engine, new frame, updated underpinnings and a whole bunch of new features, which made it unique. So post the shoot, when I was given the option of riding it back to Mumbai, I didn’t know it was going to be my new long term companion. This report is based on my initial 1,000km with the bike.

The good bits:
The most impressive bit for me about the new Meteor 350 is its lightness. At 191kg, it isn’t a feather-light machine, but RE engineers have distributed the weight in such a manner that it feels more like a 150cc bike. The lightness not only helps in maneuvering the bike while parking but also is a boon in negotiating your way through heavy traffic.

Talking about numbers, the Meteor 350 is significantly more powerful than the UCE motor as seen in the Classic 350. But numbers don’t always say the true story and that’s the case with the Meteor 350. While it is significantly quicker and faster than the Classic 350, the most impressive bit is how refined the new engine is. I could hold speeds between 90-100kmph with hardly any vibes and this relaxed nature of the motor should make touring stress free.

Apart from refinement, the Meteor 350’s gearbox is right up there offering precise gear shifts and the clutch is much lighter, although it doesn’t get slip and assist function. The rider’s triangle is also spot-on and I am 5ft 10 and the riding posture never felt cramped.

The not so good bits:
First thing that you will notice is the firm rear suspension. It isn’t back breaking or transmists every undulation to the riders back, but a slightly softer setup would have been welcome. While our road test proved that the Meteor 350 offers better stopping power than the Classic 350, the bite and feedback through the lever is missing.

Also, I had noticed a bit of brake fade as the odometer kept on adding miles. The halogen headlight offers good intensity but lacks spread or reach. This isn’t that much of a concern, but if you ride more in the dark, a pair of auxiliary lights is recommended.

Moving on:
With the Meteor 350 in the garage, my KTM has already started feeling jealous as I prefer the easy nature of the cruiser for my runabouts than the manic Duke. I normally don’t christen my long-term machines, but the Meteor is an exception. I call it Napoli as its cool-blue shade reminds me of Diego Maradona and his incredible journey with the illustrious Italian city. The plan is to spend more time with the Meteor 350 on the highways and tour a bit. The next long-term report will focus on its touring credentials.