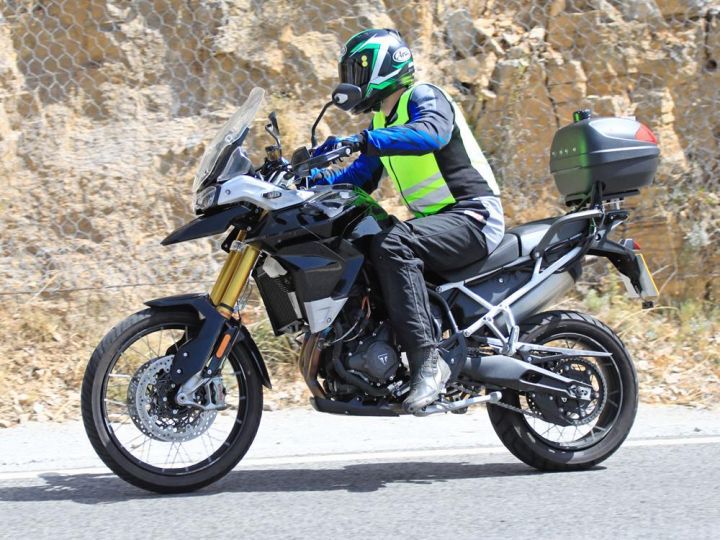 British bikemaker Triumph launched the updated Tiger 800 XC in 2018 with a host of improved electronic rider aids, mild mechanical changes, a new TFT display along with a couple of cosmetic updates. While we were pretty happy with the changes, Triumph felt it was too iterative and decided to revamp the model altogether. We say this because the 2020 Tiger XC has been spotted testing overseas. It gets a complete overhaul in terms of design, sporting more premium mechanical components and possibly a bigger engine compared to the current model.

To delve into details, the 2020 Triumph Tiger looks sleeker and more compact than before. The fuel-tank looks visually narrower and tighter compared to the current model which should make it easier to grip. Up front, it gets slimmer LED headlights with eyebrow-like LED DRLs, a new front fender and beak, a revised windscreen, and a plastic sump guard instead of the aluminium unit seen on the existing model. Interestingly, the tail light is now all-LED and mounted on the rear fender.

The inline-three motor appears to feature bigger exhaust headers which may imply that the bike’s engine capacity has been bumped up to around 900cc. What adds to our hunch is the fact that the upcoming Euro5 emission norms are likely to affect the performance levels of all bikes, forcing manufacturers to increase the displacement in order to extract more power. We expect the new Tiger to pump out close to 110PS, helping it close the gap to its Bolognese rival, the Ducati Multistrada 950.

There’s also a new frame at play here, or rather, a new subframe. As opposed to the welded on subframe on the 2018 Tiger, the upcoming model gets a new bolt-on subframe and removable pillion footpegs, which should be easier to replace in case of an accident. It also features a new swingarm design that looks noticeably shorter than before and laced spoked wheels, which means the Tiger will finally run tubeless tyres straight from the factory. Weirdly enough, the test bike seems to be using proper road-biased tyres despite it being the off-road oriented XC variant.

What’s more? The 2020 Triumph Tiger also features gold-painted forks - presumably from Öhlins - and larger radially mounted front brake calipers clamping onto new rotors which should translate to better-stopping power. Pan to the rear and you will notice an unusually long exhaust pipe sticking out of the redesigned canister which looks really odd, but the extended bit could just be for testing purposes.

So when could we expect Triumph to take the wraps off the new bike? Well, considering that the spied test bike looks almost production-ready, we could possibly be looking at the new Tiger XC being showcased at EICMA 2019 with an international launch scheduled for early-2020. Expect to see the bike enter our shores by mid-2020.