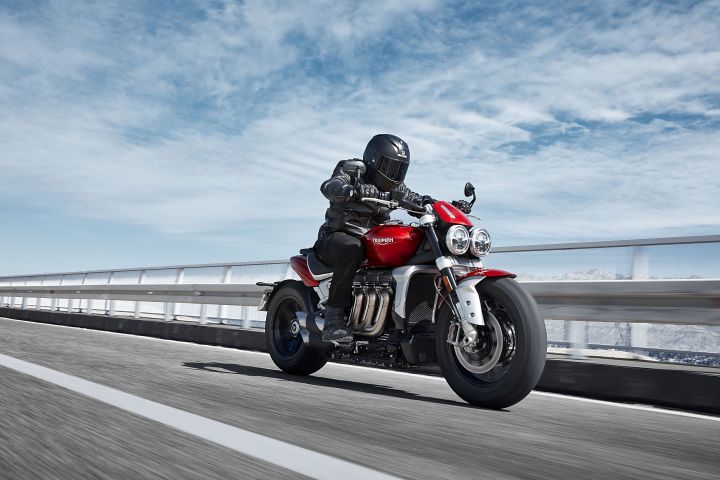 The arrival of the 2020 Triumph Rocket III was imminent. The British brand introduced the limited edition Rocket III TFC earlier this year, and that was enough to whet our appetite for the mass production-spec bike. And it is finally here as Triumph has taken the wraps off the muscle bike. It gets a new 2500cc triple motor, comes loaded with electronics and kitted with top-rated components, some of which aren’t even yet found on Triumph’s performance-oriented bikes like the Street Triple RS and the Speed Triple RS.

The imposing 2500cc inline three-cylinder engine is one of the largest powerplants found on a motorcycle. The bump up in displacement has brought about an 11 per cent increase in power output, which now stands at 167PS. However, the Rocket III has always been a torque monster, now producing 221Nm of gut-wrenching torque at just 4000rpm! In order to keep the rider on the saddle and in firm control of the motorcycle, the new Rocket III gets ride-by-wire, four rider modes (Rain, Road, Sport and Rider), cornering ABS and traction control. As part of the electronics suite, there is also hill hold control and cruise control.

With the all-new aluminium frame, Triumph has managed to seriously shed kilos off the Rocket III. In fact, the motorcycle is now 40kg lighter than the older bike despite it now packing a larger motor. At both ends of the motorcycle you get Showa fully-adjustable units. The biggest highlight in terms of kit offered is that Triumph has sourced Brembo’s top-of-the-line Stylema monobloc calipers for the monster.

When it comes to the styling of the new Rocket III, it does not look dramatically different from the older bike. There are subtle updates to the look. The iconic twin headlamp units are now full LEDs. The wide 240-section rear tyre adds to the whole muscle bike persona. The cast aluminium alloy rims come shod with specially developed Avon Cobra Chrome rubber.

The Rocket III comes in two avatars, R and GT. For those who want a more serious ride, the roadster R should suit their tastes as it comes with a wide flat handlebar, mid-set pegs and a decent seat height of 773mm. However, if you are looking for a laidback experience, the GT version gets an even lower seat (750mm), forward set rider footpegs and a pullback handlebar. A pillion backrest on the GT variant further brings out the cruiser vibe.

The only remaining secret regarding the new Rocket III is its price. The bike goes on sale in foreign markets from November onwards. Hence, one can expect this bike to arrive on shores early next year. Given the features that it is packing, the pricing of this bike could be around Rs 20 lakh to 22 lakh (ex-showroom), while the previous Rocket III retailed for Rs 18 lakh in India.