It has a 31-inch screen for the rear passengers and LED lighting in its panoramic sunroof! 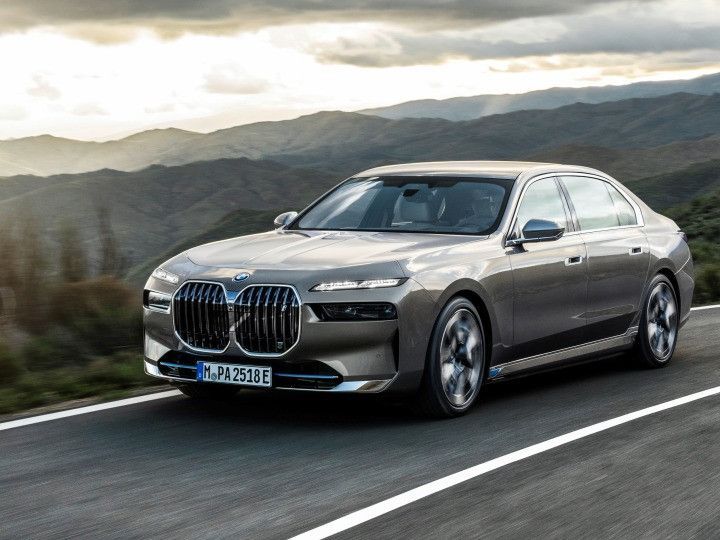 The BMW i7 has been unveiled as an all-electric version of the next-generation 2023 BMW 7 Series flagship sedan. Unlike the i4, the i7 electric vehicle (EV) isn’t a standalone model, so it shares its wheelbase, features and equipment with the ICE-powered 7 Series variants. The electric sedan will be launched in select markets outside India in November 2022, and is expected to arrive on our shores next year.

Its split headlight setup is probably the most eye-catching design cue of the BMW i7. We’ve recently saw a similar headlight and DRL combination in the facelifted X7 SUV, alongside a similarly large kidney grille. In the i7, the grille has an illuminated surround.

In the profile, the i7 stands out with its 3.2-metre wheelbase and flush-fitting door handles. With a battery pack mounted to the chassis, the floor is raised, and it gives the sedan an upright stance. At the rear, the sedan gets a sleek pair of split LED taillamps, and exhaust exits are absent on the i7.

The i7 is powered by a pair of electric motors and BMW’s fifth-generation eDrive electric powertrain. Together, the e-motors produce 544PS, enough to get from 0-100kmph in just over 4.5 seconds! The 101.7kWh battery pack offers a WLTP-tested range of 590-625km on a full charge.

For now, the electric flagship sedan will only be available in a single i7 xDrive60 variant. Later in 2023, BMW plans to introduce a more powerful i7 M70 xDrive variant with “well over” 600PS and 1000Nm. The carmaker claims that the full-size electric sports sedan will get from 0-100kmph in under four seconds!

The i7’s interior is all-new, with a BMW Curved Display at the front with the latest iDrive 8 operating system. Rear passengers get their own roof-mounted 8K 31.3-inch display called the BMW Theatre Screen that’s paired with the premium audio system and a 5G-compatible aerial. They also have smaller touchscreens within the door armrests and a Sky Lounge panoramic roof with inset LEDs.

In the future, after the ICE variants of the 7 Series are discontinued, the i7 will carry on as the flagship BMW sedan. Even this year, in Europe the i7 will debut before any ICE-powered or hybrid versions of the next-generation 7 Series. We expect the sedan to make it to India next year. It’ll command a premium over the iX SUV that’s priced from Rs 1.15 crore (ex-showroom), and will rival the upcoming Mercedes-Benz EQS and Tesla Model S electric sedans.