Here’s Your Five-point Guide To The New Kawasaki Z650RS

The Z650RS is Kawasaki’s fifth offering in its 650cc portfolio 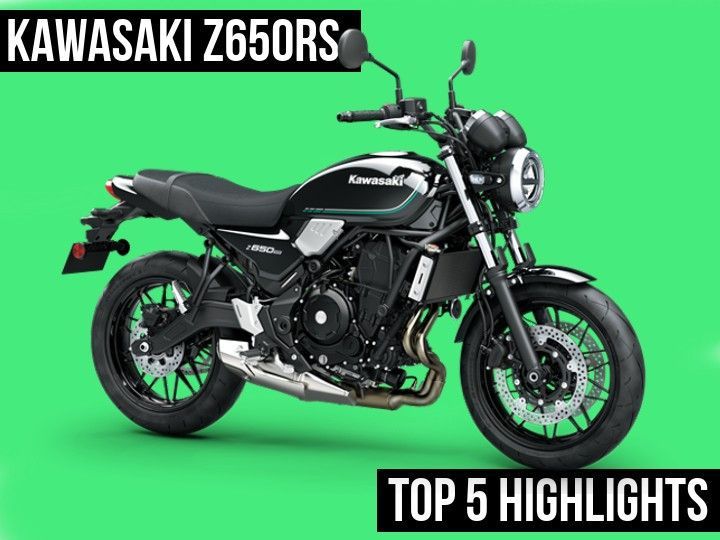 Kawasaki has been a key player in India’s big bike market, largely thanks to its competitively priced 650cc lineup which features the Z650 and the Ninja 650. Even its larger capacity motorcycles have done rather well, barring the Z900RS, which bombed miserably in the Indian market due to its sky-high price tag (#CBUWoes).

Coming in soon via the CKD route, it seems that the former rather than the latter scenario is all but destined for Kawasaki’s new Z650RS. Here are the top 5 things you should know about it:

The Kawasaki Z650RS is quite handsome. Its design draws inspiration from the iconic 1975 Z650-B1 and blends it with modern elements. You get a horizontally split LED headlamp with a chrome nacelle, complemented by a round, old-school fuel tank with pinstripes, similar to the 1975 model. This is topped by a flat ducktail seat and 16-spoke alloy wheels that are meant to mimic wire-spoke wheels.

Kawasaki offers the Z650 in three colours -- Candy Emerald Green, Metallic Moondust Gray, and Metallic Spark Black -- the first one being our pick.

One thing that seems like an afterthought is the horn placement, which sticks out like a sore thumb in an otherwise good-looking package. What we would’ve also appreciated is a side-slung exhaust to properly drive home the nostalgic vibes.

The Z650RS’ retro appeal seeps down to its features too. The instrument cluster, in particular, looks quite retro with its circular twin-pod analogue speedometer and tachometer dials, which are housed in artillery shell-shaped casings. Don’t be fooled, though, as the bikemaker has slapped an LCD inlay between these dials, which provides information like gear position, fuel level, time and tripmeters. Along with this, the bike packs dual-channel ABS and all-LED illumination, amping up the neo element of the neo-retro Z650RS.

As its name suggests, the Kawasaki Z650RS is powered by a 649cc, parallel-twin engine putting out 68PS and 64Nm, mated to a six-speed gearbox with gear ratios identical to the Z650. However, Kawasaki claims that it has tweaked the engine to feel punchier at lower revs to suit the Z650RS’ retro character. This is a claim that we will put to the test once we get the bike for a review at our HQ in Pune.

Like the engine, the Z650RS borrows its underpinnings from its 650cc siblings. So it gets a tubular steel trellis frame (coated in black here) sprung on a 41mm telescopic fork and a preload-adjustable monoshock, borrowed from the Z650. While the brake calipers remain the same as the Zed, no petal rotors for the RS.

Similarities aside, the Z650RS does differ from the Z650 in some ways. For instance, it has a smaller 12-litre fuel tank (3 litre less than the Z650) and a kerb weight of 187kg (1 kg less than Z650). More importantly, its seat height has increased to 820mm (30mm more than Z650) while the ground clearance has decreased to 125mm (Z650 offers 130mm), which makes it slightly less accessible for shorter riders and not as convenient over our stupidly designed speed humps.

In addition, the Z650RS also gets a wider and taller handlebar than the Z650, for a more upright and relaxed riding posture.

As mentioned earlier, the Z650RS is India-bound and is expected to set foot here in November 2021 at a price of Rs 7.5 lakh (on-road). For more details about its launch timeline, check out our exclusive story.