The Vitara Brezza utilises a 1.5-litre K15B petrol engine that develops 105PS of power and 138Nm of torque. It’s offered with two transmission options: a 5-speed manual and a 4-speed torque converter. The variants also come with Maruti’s 12V mild-hybrid system, which adds functions like start-stop and torque boost assist.

If it ain’t broke don't fix it! This is the philosophy most leading companies use for their best selling products. Be it Apple with the iPhone or Honda with the Activa scooter, over the years they have made subtle changes to keep their products fresh without losing the essence of the original. This is exactly what Maruti Suzuki is trying to do with the ever-popular Vitara Brezza facelift.

Since its launch in 2016, the Vitara Brezza has been available only with a single engine option and that continues with the updated car as well. But instead of a diesel, you now get only petrol. You also get a more sophisticated torque converter automatic as compared to the rudimentary automated manual.

So are the cosmetic changes substantial enough for you to consider the Vitara Brezza over its newer rivals? And does the Brezza drive experience change drastically with the petrol motor? 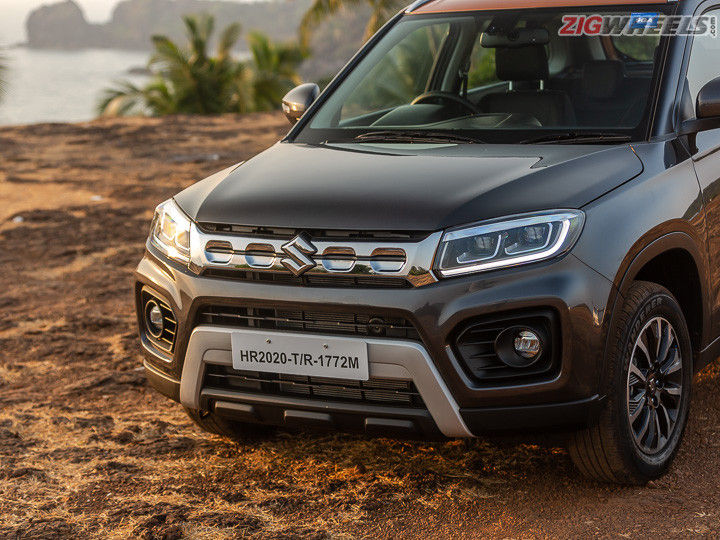 The changes on the outside are bare minimum. Up front, you get a shiny new chrome grille, which merges with the brand new headlamps now sporting full-LED lighting with separate projectors for low and high beams. What grabs your attention though are the LED daytime running lamps, which double up as turn indicators. The front bumper too is slightly different and lower down you also get a silver finish that mimics a bull bar. In profile, the only change are the new alloy wheels. They do look more elegant than before but still aren't as sharply cut as the ones offered on some rival cars. Like the silhouette, even the rear design remains mostly untouched. The changes at the rear are limited to just the aggressive new bumper and the stylish new LED tail lamps. Overall, the Brezza does look more fresh and up to date than the outgoing car. 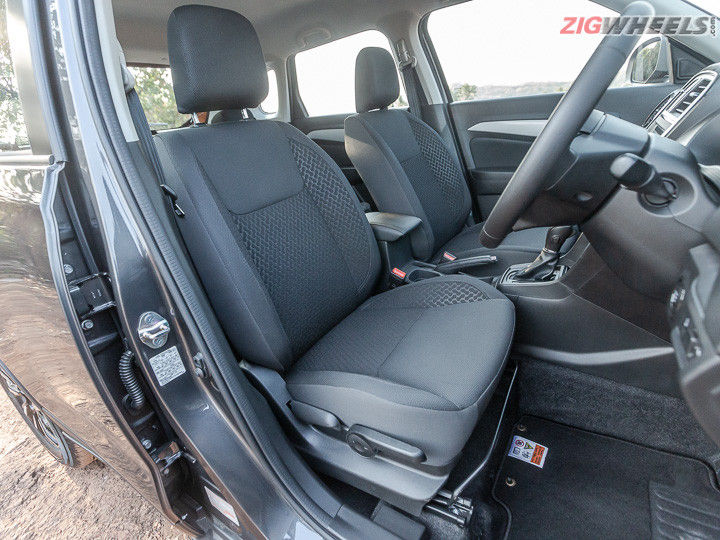 As compared to the exterior, if you expect more updates on the inside then you are in for a big disappointment. Back in 2016, when the Vitara Brezza was launched, the interior quality wasn’t its biggest strength. Four years later with newer competition it falls back further. The plastics used, especially lower down in the cabin, look cheap. Cars like the Hyundai Venue or even the Mahindra XUV300 use much more premium materials. 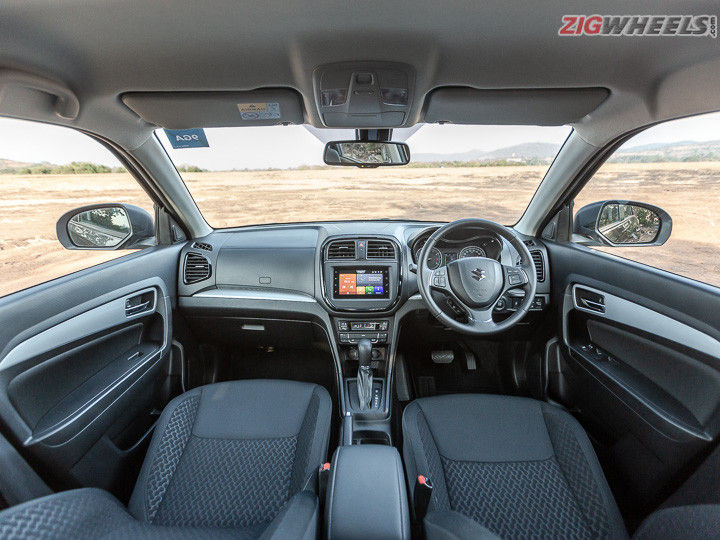 The dash layout too looks a bit dated. The simple layout though really helps ergonomically, as all the buttons and switches fall to hand easily. Getting in and out of the car is easy thanks to the wide-opening doors and the high-perched seats. Visibility up front is fantastic, as the thin A-pillars and the big glass area gives the driver an unobstructed view all around. The front seats too are comfortable with good side bolstering and the new seat fabric looks more upmarket. At the rear, the wide bench makes it reasonably comfortable for three adults, with a good amount of knee and headroom on offer. Although boot space at 328 litres isn’t class-leading, the bay is well shaped and you also get 60:40 split-folding rear seats for added practicality. You also have loads of storage spaces, like the twin gloveboxes, storage under the centre armrest, and big front door pockets. 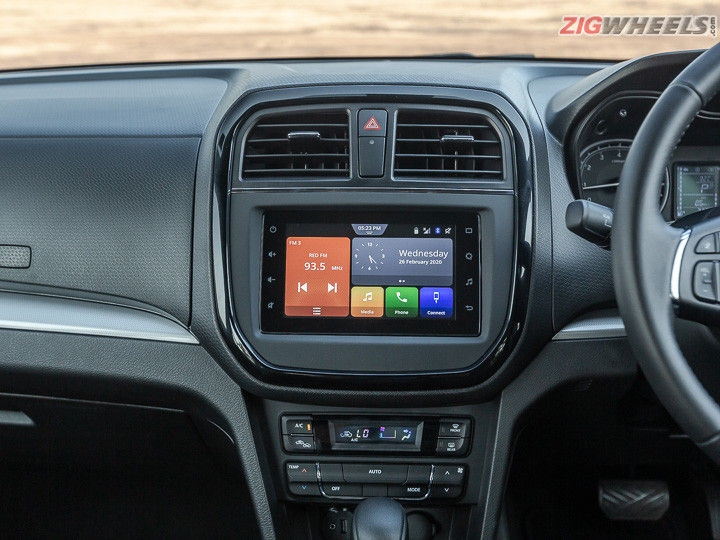 With the Brezza facelift, you get some additional features like auto-dimming rearview mirror, auto folding, and opening ORVM. Maruti has also plonked in the Smart Play infotainment system from the XL6 in the Vitara Brezza. This 7-inch touchscreen system is easy to use but it looks a bit old compared to the bigger 8-inch screen of the Venue. You also get some cloud-based features in the new system but it uses the connected phones network rather than an embedded SIM like in the Venue. So it doesn’t get functionality like geo fence alert, remote engine start-stop, and remote door lock and unlock. We were expecting Maruti to offer more features with the facelift Brezza but it misses out on rear AC vents and wireless charging pad. In terms of safety, you don’t get tyre pressure monitoring system, ESP, or even a six airbag option. 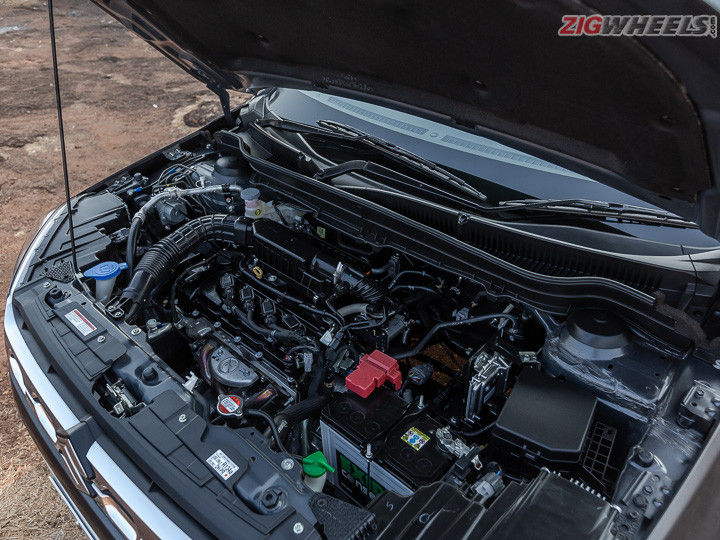 Now let's come to the biggest change in this car, the engine. The Vitara Brezza is powered by the same 105PS 1.5-litre petrol motor that you get in the Ciaz and the XL6. It also borrows the same transmissions, a 5-speed manual and a 4-speed automatic. 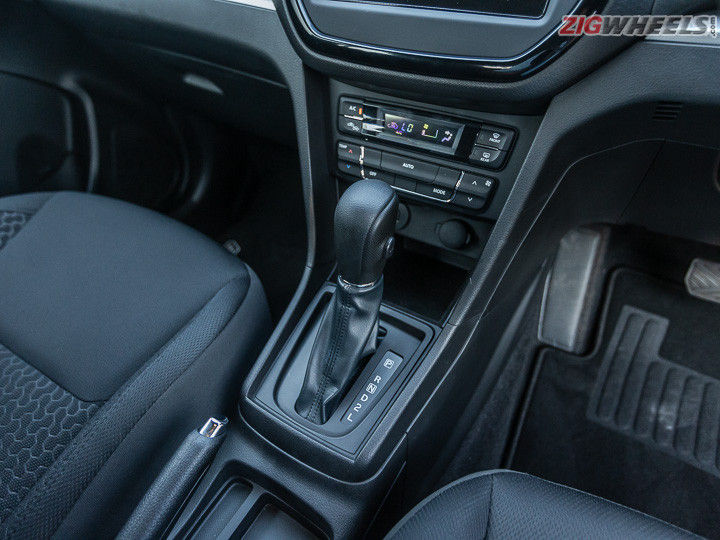 Let's start with the automatic transmission first. On paper, this 4-speed gearbox comes across as old school, when compared to the Venue's 7-speed DCT or even the 6-speed torque converter in the EcoSport. But at low speeds, it feels anything but archaic. As soon as you get on the throttle this car moves forward smoothly with good response from the engine and the gearbox. It excels at slow speeds, which makes it relaxing to drive in the city traffic. Despite the tall gearing, you are never left wanting for more power, as the Brezza accelerates forward effortlessly. Even the mild-hybrid system works seamlessly. If you stop at a traffic light, the engine switches off even in drive mode and as you go off the brake it comes back to life instantaneously without any vibrations. 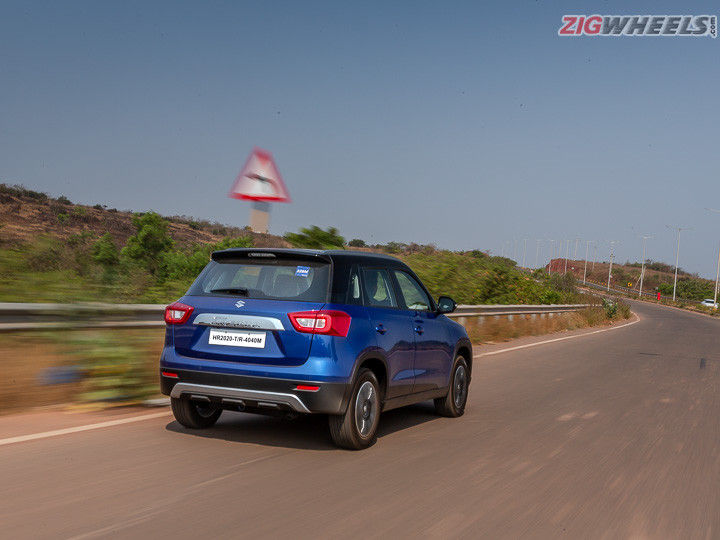 But on the flip side, once you go out on the highway, this automatic gearbox starts showing its basic roots. Thanks to the tall gearing, it cruises in a relaxed manner but when you want to execute a quick overtake the gearbox hesitates to downshift. In some situations, it stays in the same gear and you have to rely on the engine’s power to accelerate ahead. As a result, you have to plan your overtakes well in advance. This deficiency is accentuated further when going uphill. You also don’t get a sport mode or manual paddle shifters to help you out. 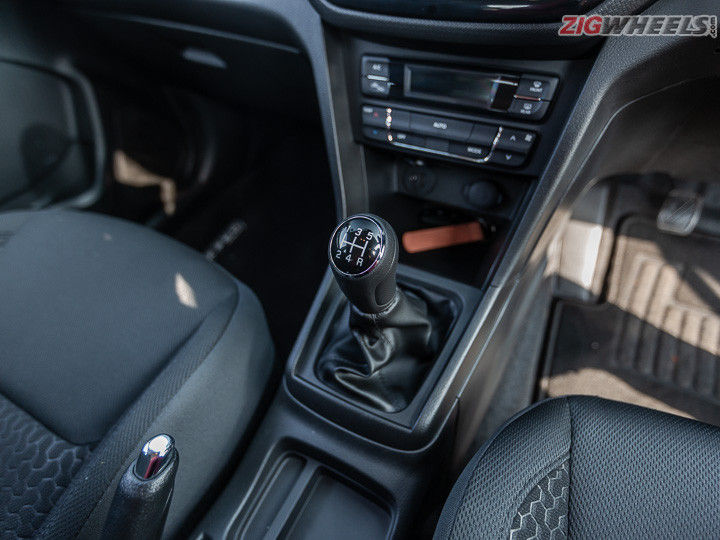 The manual version of the car, on the other hand, feels more at home on an open road. With the 5-speed gearbox, you can extract the maximum from the engine. Although good on its own, the 105PS motor doesn't feel as potent as the Honda City’s 1.5 litre engine. Suzuki’s motor doesn’t feel as free revving or as powerful. It also lacks the punch of the old 1.3-litre diesel motor, so when overtaking or driving uphill you have to shift a lot more. But at low speeds, the motor feels responsive and you can pull from as low as 15kmph in third gear without any drama. The 5-speed gearbox too has a slick action and combined with the light clutch the Brezza manual feels stress-free in the city. 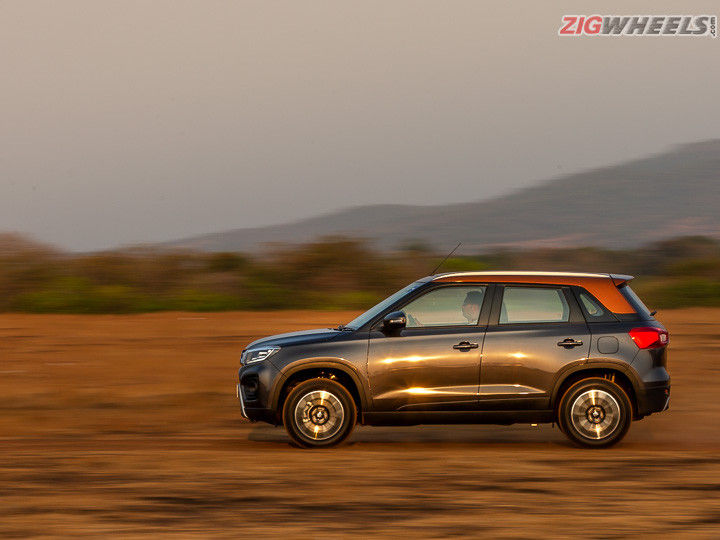 Where this petrol motor excels though is in terms of refinement. Especially at low speeds it is hard to tell if the engine is even running. In fact, the Vitara Brezza facelift has taken a huge step ahead in terms of overall refinement. Where in the old car you could hear a lot of tyre and wind noise, the new car feels remarkably quiet thanks to the improved sound insulation.

Obviously, with the petrol engine you are gonna miss the diesel’s efficiency, but going by our experience of the XL6 automatic, we expect the lighter and taller-geared Brezza to be quite frugal. For reference, the XL6 returned 11.85kmpl in the city and 18.11kmpl out on the highway. 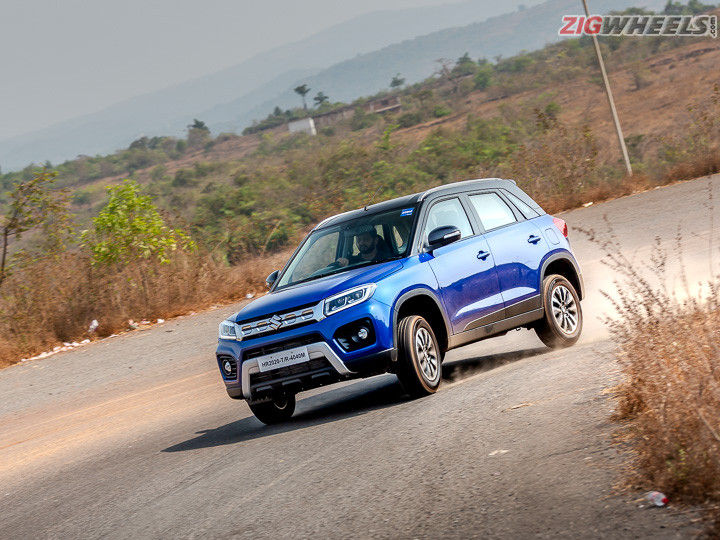 Where the original Brezza used to feel too stiff and uncomfortable over uneven roads, the new car feels significantly more pliant. Be it at city speeds or out on the highway, the Brezza facelift feels at home save for a bit of side-to-side movement caused by the high centre of gravity. The suspension too now works silently, which adds to the refined nature of this SUV. 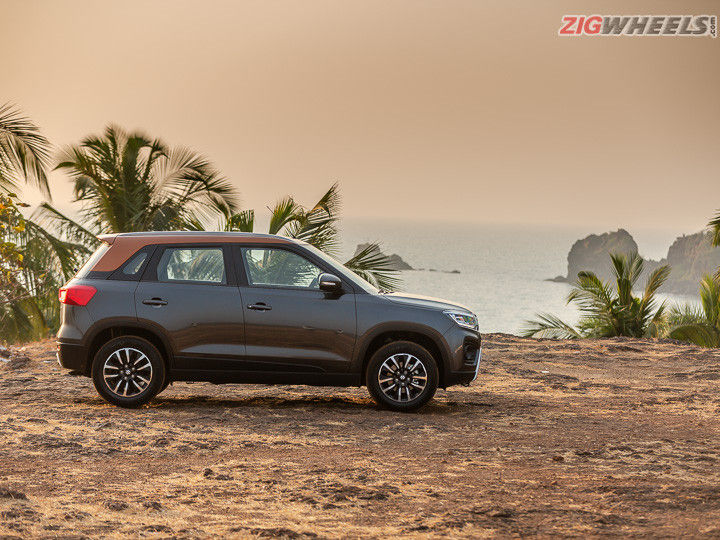 The Brezza always felt agile and now with a lighter petrol engine, it feels even better. The precise steering and the playful chassis make for a car that is good fun to drive. Even in a straight line the Brezza feels stable and the brakes provide good stopping power. 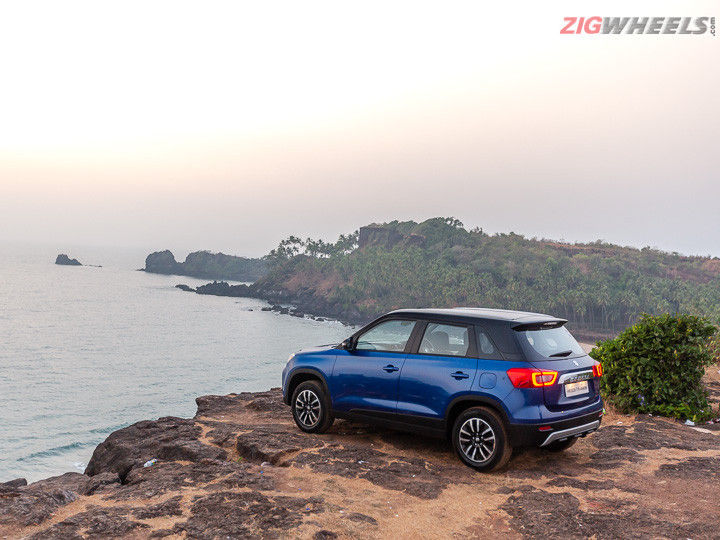 Overall, the Vitara Brezza facelift is far from perfect. Compared to its rivals, this SUVs cabin looks a bit dated and even the perceived quality is not up to the mark. Priced between Rs 7.34 lakh and Rs 11.4 lakh, the Brezza facelift isn’t cheap either and the fact that it isn’t as well equipped as its rivals marks it further down. You will also miss the diesel engine’s punch and efficiency. Maruti Vitara Brezza Price 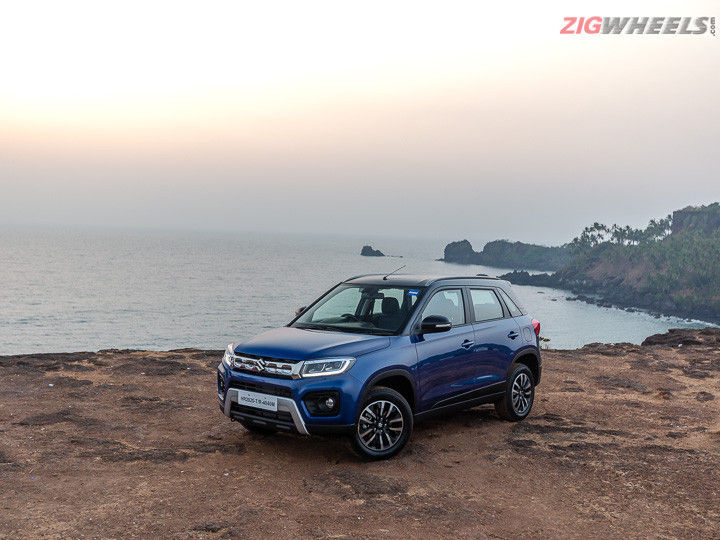 But other than that, there is a lot going for the Brezza. It has a spacious and practical cabin, great refinement levels, is still fun from behind the wheel, and the light controls make it easy to drive too. Between the two versions, we would choose the manual as it is almost Rs 1.5 lakh cheaper and won't cause you any inconvenience either.

Q. New diesel when launching?
Q. Vitara breza front disk plate price
Q. Is Maruti Vitara Brezze vxi petrol is good to buy?
Q. Has Maruti started production of smart hybrid AT?
Q. Does Maruti Vitara Brezza have automatic transmission or AMT version?
Q. Is Vitara brezza lxi Sizzling Red With Midnight Black Roof available
View More Questions
Q. I am confused between Venue 1.2-litre petrol S variant and New Vitara Brezza LXI model, kindly suggest. View All Answers
Q. Which is good for buying Tata Nexon or Maruti Suzuki Vitara Brezza or Nissan Kicks or Renault Duster or Hyundai Venue in a budget of 10 lakhs? View All Answers
Q. My budget is around 12 lakhs .Which would be the best choice Creta S petrol, Brezza ZXI, Tata Nexon XZ Plus or XUV300 W8 petrol?
Q. Which one is value for money Vitara Brezza, XUV300 or Nexon?
Q. I am confused between Ford Freestlye Titanium Plus (Diesel) and Maruti Vitara Brezza VXI(P) for the same price range, What would you recommend considering Looks, Mileage, Road presence, Features, Maintenance and safety in a overall package
Q. Which car is the best in XUV300 and Vitara Brezza ?
View More Questions
All Vitara Brezza Questions and Answers

Are mild cosmetic upgrades and a petrol engine enough to bring the Vitara Brezza back in the game?

What is the price of Maruti Vitara Brezza Top Variant?

The ex-showroom price of top variant of Maruti Vitara Brezza is 11.41 Lakh (Delhi).

What is the mileage of Maruti Vitara Brezza?

What is the EMI of Maruti Vitara Brezza in Delhi?

What are the top competitors of Maruti Vitara Brezza?

What is the boot space in Maruti Vitara Brezza?

What are the best financing options for Maruti Vitara Brezza?