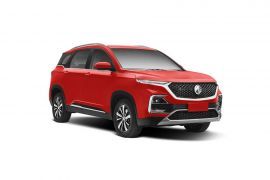 It has the right mix of aggression and ornamentation for a modern-day SUV. Those LED DRLs sparkle brightly as they are squeezed against the hood. The generous but tasteful use of chrome as it cradles the large grille and arcs around the fog lamps adds to the glitter effect. Then there are the all-LED headlamps and tail lamps which are available in all variants except for the base! The ORVM-mounted turn indicators, skid plates and roof rails ensure that even the base variant doesn’t look barebones either!It dwarfs other MG SUVs and its competition here in India too. Incredibly, it is longer than the Tata Harrier by a solid 57mm. That is an incredible stat, considering that the Harrier is larger than the Honda CR-V. From the rear, the Hector has some striking similarities to a German brand’s SUV design. The clamshell bonnet and tail lamps that fan out have a Q-factor to them. Get it? Despite the slight gangliness or its derived design, the Hector comes across as a head-turning SUV.