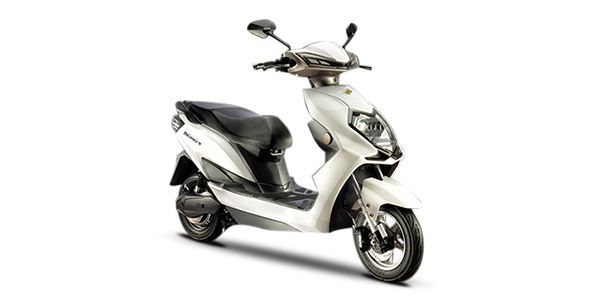 Evolet Derby is an electric scooter launched at a base price of Rs. 46,499 in September 2019 by EVOLET in India. Derby goes 60km in a single charge and takes 3 - 4 hours for a full charge.. Evolet Derby comes with disc breaks in front and rear. Evolet Derby has wheel size of 254 mm. It is available in 2 variants.

Evolet has launched a new electric scooter called the Derby. It is a low-speed electric scooter with a top speed of 25kmph and a range of 55 to 60km. The scooter gets a sporty design and features like all-LED lighting, full-digital instrument console and mobile app connectivity. The scooter comes in two variants: EZ (VRLA battery) and Classic (Lithium-Ion battery). It is available in black, black/red and black/silver colours.

Suspension setup includes telescopic forks at front and twin shock absorbers at the back. Braking is via front and rear discs with E-ABS as standard. It get 10-inch tubeless tyres fitted on alloy wheels. The Evolet Derby weighs 102kg, has a low seat height of 750mm and a ground clearance of 160mm.