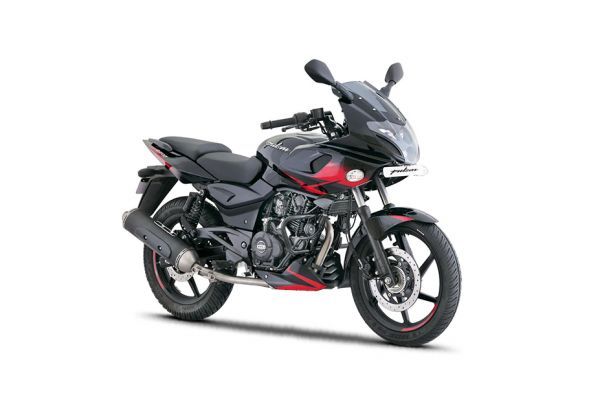 Bajaj Pulsar 220 F is a sports bike launched at a base price of Rs. 1.08 lakh in May 2009 by Bajaj in India. Pulsar 220 F is powered by 220cc engine claiming mileage of 40kmpl. Pulsar 220 F has a 4-stroke, 2-valve, twin spark bsvi compliant, dts-i fi engine, oil cooled and a 5 speed gear box. Bajaj Pulsar 220 F comes with disc breaks in front and rear with a support of ABS. It is available in 2 variants and 3 colours.

The Bajaj Pulsar 220F BS6 has been launched. It is priced at Rs 1,17,296 (ex-showroom, Delhi), a hike of Rs 8,960 over its BS4 predecessor. For this extra premium, you get a cleaner fuel injected motor and nothing more. Other than powertrain updates, the Pulsar 220F remains mechanically and cosmetically unchanged.

It still comes in two colours: blue and red. Features are the same projector headlamp, LED tail lamp and semi-digital instrument console. underpinnings include telescopic forks and twin gas-charged shock absorbers. Braking setup includes a front and rear disc with single-channel ABS as standard fitment. Due to the addition of fuel-injection and a catalytic convertor, weight and increased by 5kg.

The Bajaj Pulsar 220 BS6 competes with the Hero Xtreme 200S. Price-wise it also goes head to head with the Suzuki Gixxer SF BS6.

The Pulsar 220F is powered by an updated 220cc fuel-injected motor which makes 20.4PS, which is 0.53PS less than the BS4 variant. The torque remains the same 18.55Nm. It continues to use a 5-speed gearbox. There’s no change in terms of underpinnings. It still uses a telescopic fork at the front and twin shock absorbers at the rear. Anchorage is provided by disc brakes at both ends paired to a single-channel ABS.

The Bajaj Pulsar 220F continues to sport a semi-faired look with just two colour options to choose from -- blue-black, and black-red. The BS6 version looks exactly the same as the older BS4 model. Bajaj hasn’t even updated the decals on the BS6-compliant model. So if you are expecting an all-new Pulsar 220F, then you might want to wait for some time.

Its features list remains the same as before. It gets a semi-digital instrument console which displays a range of information such as trip meters, odometer, speed and fuel level and backlit switchgear. Single-channel ABS is offered as standard.

The Pulsar 220F competes with the Hero Xtreme 200S. The Xtreme 200S is the most affordable 200cc faired motorcycle, it also has an impressive features list, which works in its favour. The Pulsar 220F, doesn’t boast a long feature list, but it has always remained a proper value-for-money motorcycle for someone looking for a sporty motorcycle.