Yamaha had recently unveiled a sportier variant of the Ray-Z scooter called the Cygnus Ray-ZR at the 2016 Auto Expo. We have done a spec comparo of the new Yamaha offering with the Honda Dio and the Suzuki Lets 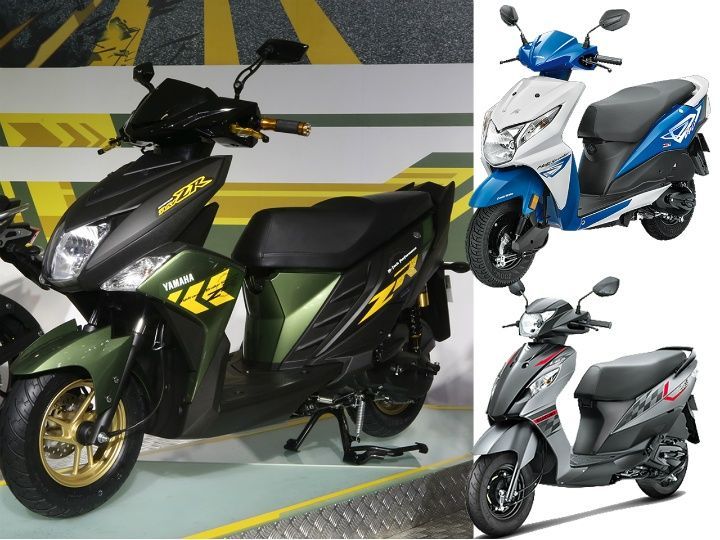 Yamaha has showcased the new Cygnus Ray-ZR at the 2016 Auto Expo, aimed at the youth of the country. The Cygnus Ray-ZR is basically a sportier-looking version of the Cygnus Ray-Z which has been in the market for quite some time now. With the kind of popularity scooters have gained, manufacturers are now bringing scooters that are targeted towards teenagers thanks to its attractive design. Competing against the Yamaha, we have got the Honda Dio and the Suzuki Lets.

All three scooters exterior bodies are made out of fibre panels which provides the freedom for designers to give the scooters edgy and complex shapes while keeping the weight in check. The Suzuki Lets tips the scales at 98kg which is comparatively lighter than the Ray-ZR and Dio at 103kg and 105kg respectively.
Yamaha has taken the competition a step ahead with the provision of optional disc brake at the front, something which is not available in the other two scooters. Also the disc brake variant of the Ray-ZR will feature cast aluminium alloy wheels. All three scooters sport 10-inch rims. The Dio has 10mm larger drum brakes at both ends as compared to the Lets which has 120mm drum brakes.

For suspension duties, Honda still continues to use the aging trailing link with spring-loaded hydraulic damper type at the front. The Ray-ZR and the Lets use oil filled telescopic forks which are far more superior in terms of handling and stability. Moving to the rear, all three scooters are provided with a spring type hydraulic shock absorber. The Honda Dio has the smallest wheelbase at 1,781mm which aids to its manoeuvrability whereas the Suzuki Lets stands at 1,805mm. Yamaha has not yet disclosed the wheelbase of the Ray-ZR but we believe it to be more or less same as the current Ray-Z. The ground clearance is the least for the Yamaha Ray-ZR at 128mm while the Dio and Lets have clearance of 158mm and 160mm respectively.

The Honda Dio is the only scooter to be equipped with Combi-Brakes which is a boon for amateur riders. The Suzuki Lets is the only scooter to have the headlight located on the handlebar while the others have it in the front facia. The Ray-ZR adopts a smoked front visor on the cowl which looks sporty. On the utility front, the Lets has just one slot for the key on the scooter, which works both the ignition and also unlocks the seat to give access to the storage space below. Under the seat, none of the scooters can accommodate a full face helmet however the trio can easily fit open-face ones.

Scooters need to deliver peppy performance and at the same time be fuel efficient. All three manufacturers go about it with different technology and nomenclatures: Yamaha with its Blue Core; the Dio with Honda Eco Technology; while the Lets makes use of Suzuki Eco Performance. As per claims by the manufacturers the Honda Dio returns a mileage of 60kmpl while the Suzuki Lets returns 63kmpl. Although Yamaha hasn’t revealed the exact efficiency of the Ray-ZR, they claim it to be best in its class. The Fascino which sports the same engine returns 66kmpl and the Yamaha Ray-ZR should return a similar figure. On the price factor, the Honda Dio is priced at Rs 48,463 and the Suzuki Lets carries a price-tag of Rs 48,668. Yamaha has not yet disclosed the price of Ray-ZR, but is expected to be priced around the Rs 50,000 mark. All prices are ex-showroom, Delhi.