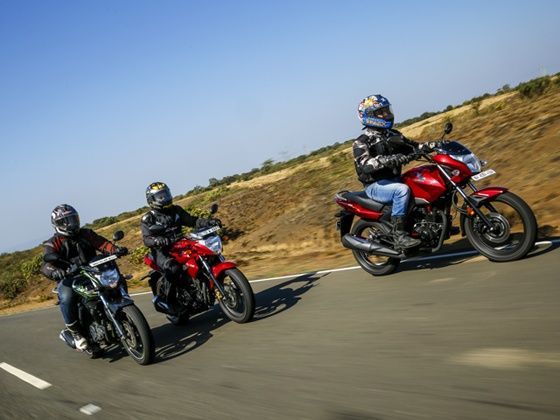 The Honda Unicorn has been a great success story for the Japanese two-wheeler manufacturer in our market and it was among the products that established the Honda brand in India. Honda introduced two premium 150cc offerings in the form of the CB Dazzler and the CB Trigger but both the motorcycles failed to ape their predecessor’s success. Now though, Honda wants to change that perception and have introduced a new offering with the Unicorn moniker, say hello to the Honda Unicorn 160. The task at hand for the Honda Unicorn160 isn’t an easy one given the fact that the new motorcycles in the segment like the Suzuki Gixxer and Yamaha FZ-S FI v2.0 have taken the competitiveness bar a notch higher. Can the Honda Unicorn 160 really make a mark in this cutthroat segment against its Japanese counterparts? Read on..

The Honda Unicorn 160 isn’t the most pretty looking motorcycles around so don’t expect a second glance. Honda has been very conservative with the styling of the Unicorn 160 with its neutral lines to attract the mature buyers and it is the least appealing of the lot. Having said that, there are some neat touches in the form of the fuel tank extensions, 3-D Honda logo and H-shaped LED tail lamp which is the standout detail. Switch gear quality is standard affair with decent quality. Like all Honda 150cc offerings the engine kill switch has been given a miss on the Unicorn 160 and in today’s day and age this is just unacceptable. The instrument console is all-digital and has been neatly laid out with plethora of information and is easy to read in motion.

The styling of the Gixxer is in sync with modern street bikes with a mass forward design and one can appreciate the design best in profile. The various cuts and creases on the body enable the Gixxer to really standout among its rivals. Switch gear quality is top-notch and the Suzuki Gixxer employs an all-digital instrument cluster along with a shift light indicator. Owing to the large number of information on display, it does become a little difficult to read on the go.

The biggest talking point for the Honda Unicorn 160 is its new powerplant. The 163.7cc, air-cooled motor churns out 14.5PS of max power and peak torque rating of 14.6Nm. The new engine is definitely the stand out feature on the Honda Unicorn 160 owing to the punch it has on offer and it can cruise at speeds above 90kmph with relative ease. The engine is free revving and decently refined too but vibrations do seep in via footpegs and handlebar at the apex of the motor’s performance. The air-cooled mill is mated to a 5-speed gearbox that offers crisp and precise shifts. The gear ratios have been well spread out and one doesn’t find much difficulty riding the Honda Unicorn 160 in crawling speeds on traffic congested roads.

Talking about specifications, the Suzuki Gixxer and the Honda Unicorn 160 are almost evenly matched. The Suzuki Gixxer’s 155cc mill generates 14.8PS at 8,000rpm and 14Nm at 6,000rpm. The Gixxer’s motor is an easy revving one and the most tractable of the lot as it has adequate power throughout the revv range. The Gixxer’s engine is also a refined soul and feels relaxed even at speeds around 100kmph while the 5-speed gearbox performs faultlessly.

The Yamaha FZ-S FI is the least powerful motorcycle of the lot on paper and the lack of power is clearly evident when you twist the wrist. The bike doesn’t feel as eager as its rivals and one has to feed in the throttle to maintain speeds above 90kmph and it just doesn’t feel as effortless as its competitors with respect to performance. Having said that, it is the only offering with fuel-injection and it does have a crisp throttle response and the most refined powerplant of the lot.

Coming to riding ergonomics, the Honda Unicorn 160 clearly showcases its commuter DNA with its heel and toe gear shifter, centre-set footpegs and raised handle bar. The riding posture on the Unicorn 160 is upright and comfortable but I found the handlebar a bit tall for my liking. Swing a leg over the Suzuki Gixxer and it feels like you have met an old friend. The mildly rear-set pegs, the wide handlebar, useful knee recess result in just the perfect riding posture conceivable and you feel instantly at home on the Gixxer. The Yamaha FZ-S FI’s riding posture is similar to the Gixxer but it isn’t as snug as the Suzuki offering.

Suspension setup on all the three offering is similar - telescopic front forks and monoshock at the rear. The Suzuki Gixxer feels the supplest of the trio with respect to ride quality, and though it isn’t really plush but in comparison the best of the lot. The Honda Unicorn 160’s front suspension is softly sprung while the rear felt a bit hard for my likening. The Yamaha FZ-S FI is the most stiffly sprung of the lot and one has to really go slow over broken roads or else your back goes for a toss.

The trio of motorcycles employs a diamond type frame. The wheelbase for the Honda Unicorn 160, Suzuki Gixxer and the Yamaha FZ-S FI is also almost similar. The Honda Unicorn 160 is quick on its feet and is the easiest of the lot to maneuver while riding in the city. But sadly it isn’t so sure footed when it comes to the highways or the twisties as the front feels light at higher speeds. Owing to this fact, one cannot really utilize the powerplant’s full potential as high-speed handling is limited. Handling dynamics of the Suzuki Gixxer and the Yamaha FZ-S FI is almost similar but the Suzuki Gixxer has a marginal upper hand as it takes a little less effort with respect to changing directions.

The Honda Unicorn 160 that we tested was fitted with the optional CBS (combined braking system) and was equipped with disc brakes at front and a drum setup at the back. Braking performance of the bike was impressive with good bite from the brakes but the front forks have a tendency to dive under hard braking which is annoying. The brakes on the Suzuki Gixxer could have been better. It isn’t that don’t they do the task at hand, but the front disc brakes feel a tad jerky and better progression would have been appreciated. The Yamaha FZ-S FI’s leads the pack with respect to braking with impressive bite and great feedback.

When it comes to pricing, the Suzuki Gixxer is the cheapest of the trio at Rs 75,420. The CBS variant of the Honda Unicorn 160 that we tested retails for Rs 77,178 while the Yamaha FZ-S FI is the most expensive at Rs 81,580. Although, CBS has its benefits but it doesn’t justify the Rs 5,200 premium over the non-CBS variant of the Unicorn 160 and my pick among the two will be the standard offering. (Note: All prices are ex-showroom Delhi)

Be it any segment of motorcycles in India, fuel efficiency is among the most vital criteria’s for our consumers. The Honda Unicorn 160 is the most fuel efficient of the lot at 55kmpl which with its 12 litre fuel tank capacity results in a range of 660km. The Suzuki Gixxer comes second with an overall fuel economy figure of 49kmpl and despite Yamaha’s best efforts; the FZ-S FI is the least efficient at 45kmpl.

The Suzuki Gixxer still maintains its crown as the best 150cc offering on sale currently by virtue of its performance, handling, ride quality and ergonomics. The fact that it’s the cheapest motorcycle out of the trio makes it a value for money proposition too. The Honda Unicorn 160 is a good effort by the Japanese two-wheeler manufacturer despite the few rough edges. The bike doesn’t feel planted as its rivals around corners given the punch that the motor has on offer. But if you overlook that aspect it’s a decent city commuter. Despite the appealing styling, good build quality and a refined motor, the Yamaha FZ-S FI comes last in this shootout. The performance deficit is obvious and the biggest hurdle for the Yamaha offering for us is its steep pricing.